We have compiled and uploaded the list of known issues. We are aware and currently working on those issues.

Please let us know via Support Ticket if you are experiencing other problems. When reporting issues, please be as detailed as possible. Screenshots, character/Team/server/class details, and timestamps would be greatly appreciated. That way we can have more information to work with on a more specified problem allowing it to be resolved faster.

Anyway, I enjoyed the bug names they were funny. You guys forgot thrust’s bleed attribute. I’ve sent in a ticket already about it but just wanted to talk about it here as well.

The bleed debuff attribute for thrust isn’t working when you stun a monster with restrain or any other stun. It would be nice if this was a prioritized fix as my swordsman/highlander bleed build isn’t as good without it.

Also, another thing that’s being looked into is the white decorative boater. I’m not completely sure on this yet but the white decorative boater dropped by infrorocktors isn’t dropping. I’ve already achieved 80,000 kills from the infrorocktors in West Siauliai and no boater (I have gained 8 monster gems which is nice). Having a hat being much more rare than a monster gem is kind of rediculous in my opinion but the fact that I haven’t gotten the item in 80k kills is just screaming a bug. From what I’ve read, people have gained the boater a couple months ago within 600-1000 kills. But perhaps various patches have caused the hat to become un-droppable.

I’ll send in a support ticket for the hat when I get to 100,000 kills (to reinforce my previous sent ticket about it) but I’m not expecting anything grand as the replies I get from the ticket system is kind of a joke.

I hope these issues get addressed and thanks for the fixes, IMC.

-P.S. Find it in your hearts to bring back the scout stealth on pets. I honestly though that was an intended feature. Now that it’s been fixed as a “bug” it’s kind of depressing that the super speed reiter-scout build is gone. It was a lot of fun going almost as fast as a cataphract with windrunners and stealth + mount. And when you stealthed and rode the mount, other players though the mount had a mind of its own. It was by far one of the best “bugs” I’ve seen that had some humor in it and wasn’t game breaking. Just my opinion though.

thanks for the announcement and I hope all issues get known and fixed :3

When you will fix this quest: [Quest] A Drowsy Scent

Drowsy Scent Quest that make the lowspec pc’s fps become zero and many lowspec pc player unable to pass that main quest. That problem is already exist since CBT but it not fixed until now.

This patch caused so many issues to list them, I still dont know how our developers are able to mess with so many things when they are just adding new loading screens…

As a linker, I find this post offensive.
Am I to assume that physical link is working as intended and its supposed to kill my teammates when used?

Physical link bug(?) is more of a debuff than a buff right now.

I can add that my Sorcerer’s Templeshooter pet’s first shot is often fired in the wrong direction because he shoots before turning towards the enemy. He also likes to randomly run off screen in dungeons and never return.

No.
“Please let us know via Support Ticket if you are experiencing other problems. When reporting issues, please be as detailed as possible. Screenshots, character/Team/server/class details, and timestamps would be greatly appreciated. That way we can have more information to work with on a more specified problem allowing it to be resolved faster.”

Physical link killing teammates is a known bug since closed beta. Im just frustrated that they are not addressing a problem from long ago

i dont know how long its been there. Just keep sending them tickets about it until its on the list. I know its frustrating, but atleast youre helping them to resolve issues.

Thank you for this @STAFF_John. I think that making posts like this every week or every other week will help with the lack of transparency that is making players feel like they are being ignored.

I know this is a big MAYBE but perhaps a development timeline indicating to us what you are going to be working on up or at least a post detailing a list of known balance issues and known content that players were promised and have been asking for?

I mean any post from you guys telling us officially that you KNOW about the things we’ve been talking about every day for months will go a long way in calming people down and maybe we can finally get some positive attitudes on this forum full of negativity lol.

100% dead on. Everything that was said here is great. @FlanFlan

Corsair’s “Jolly Roger” bug should really be added to that list.

###Introduction I have been meaning to write this post for quite a while, but with the instability of the forums it has proven to be quite difficult. There is a lot of discussion right now as to where the Swordsman tree stands as a whole, from a lack of identity to unrewarding playing style, there are multiple factors that make people unhappy with the current state of this tree and need to be dealt with one way or another. While I find most of these discussions providing fair points and I und…

Here’s a thread, but in short it includes buff slots being taken up by dead buffs (i.e. Fever Time hits 0 seconds and stacks), pillaging sometimes stops giving silver, pillaging sometimes disappears early, damage increase may be bugged, and multiple flags intersecting can cause the skill to not work (there’s a lot of debate whether or not that’s intended.) 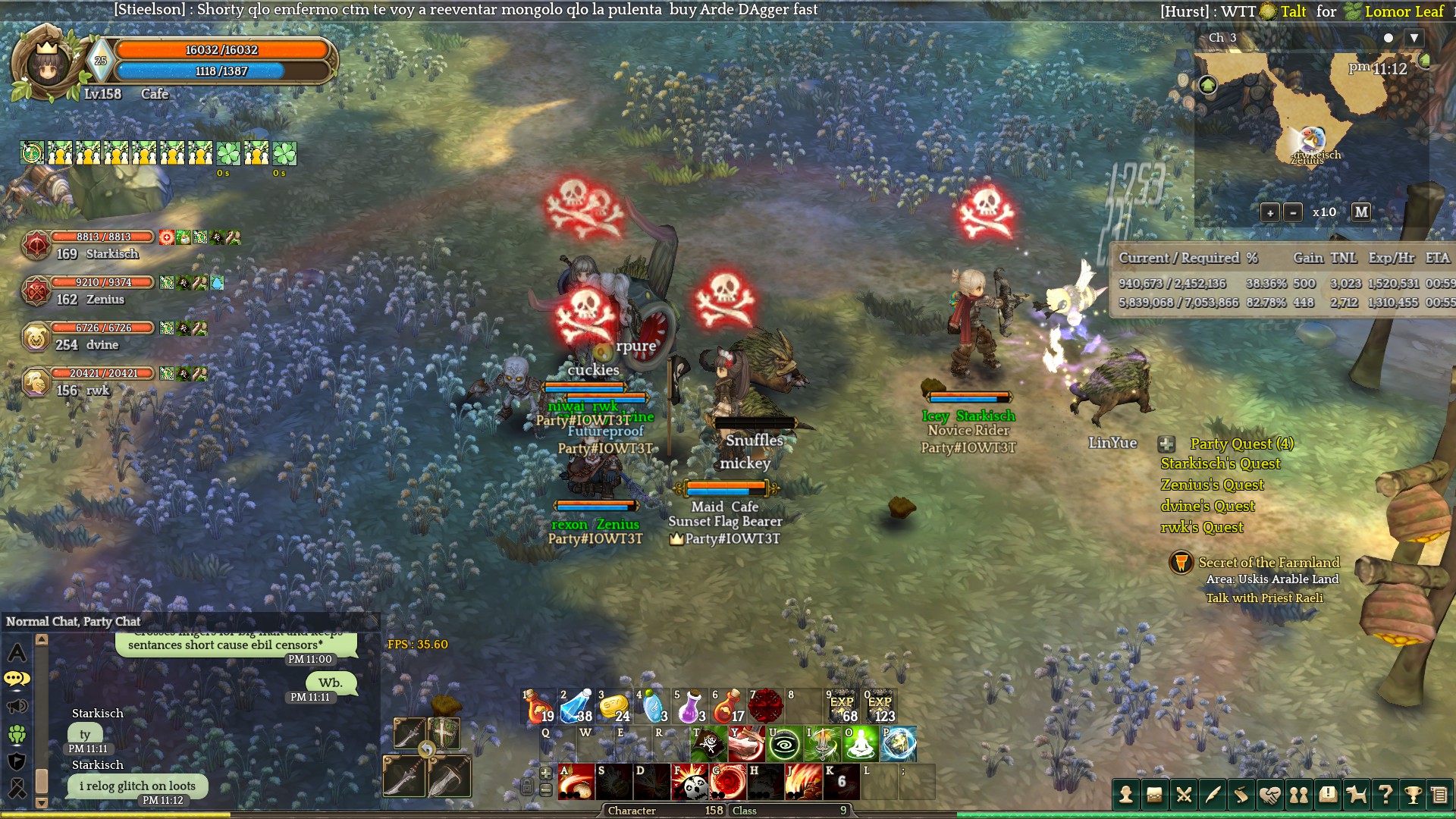 Example of buff slots bugging out. The above is Team Level 5 sticking with two Fever Times as well. 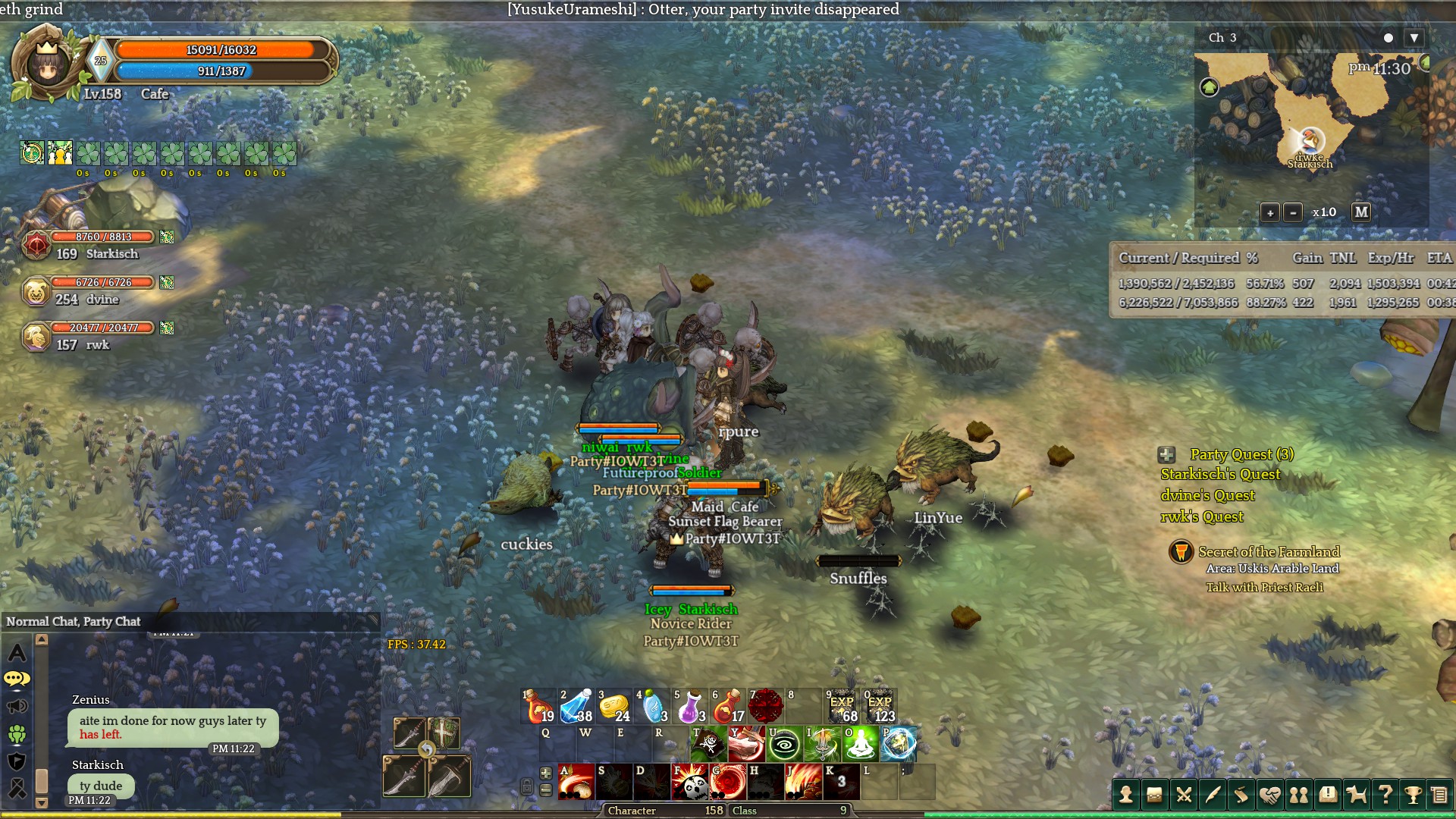 Hello, I’ve been using Jolly Roger for quite a bit and I realized it has been bugged to a certain extent. Jolly Roger’s fever time buff never goes away even after reaching 0s. May just be an UI bug, so I’m unsure of it. What happens after a ton of grinding with Fever Time happening is… well, you get so many Fever Times that you can’t see other buffs anymore. Placing multiple Jolly Roger flags causes some really weird behaviors. Walking out of one jolly roger’s area and even though still r…

Date and Time : Since iCBT2, I assume. Game Control Mode : Keyboard. Where it happened : Every single map. Bug Description : Well, time to create a topic about it. Jolly Roger damage increase seems to not be working properly. It’s supposed to give +5% per stack (5%*14 stacks at skill lvl 5), but I see no difference in my damage even when I’m the party leader. Steps to reproduce the issue : Create a party; Use Jolly Roger; Kill some mobs next to the flag; See no difference in your damag…

make sure to send them in a ticket.
“Please let us know via Support Ticket if you are experiencing other problems. When reporting issues, please be as detailed as possible. Screenshots, character/Team/server/class details, and timestamps would be greatly appreciated. That way we can have more information to work with on a more specified problem allowing it to be resolved faster.”

Probably not gonna help me here, but here’s some example. Time to find a guine- ahem i mean a friend to film his dea- i mean my skill. Yes, to film my skills, probably in a dungeon queue.

This patch caused so many issues to list them

that’s a really lame excuse, just say you are too lazy to bother

Please let us know via Support Ticket if you are experiencing other problems.

Im not lazy, I’ve reported like 200 bots in 5 days but none of them were banned

Most of those issues has been there for a while and they are messing things faster than they are fixing them.

They are developing a game

Or maybe… their attempt to develop this game IS the game!

Transpose: Losing HP when using Thaumaturge’s skill ‘Transpose’ again while its effect from the previous casting is on.