What was your very first post in this forum?!

Just had a idea on looking mine up, you can find yours on the profile page:
https://forum.treeofsavior.com/users/ - username - /activity/replies

I was hoping to get a iCBT 2 key xD
https://forum.treeofsavior.com/t/announcement-on-additional-beta-keys/99918/81?u=lunarrabbit&source_topic_id=351488

A sort of bruiser archer build? Class and Rank

I’ve always been an archer player, though this time I want to build something different, or rather tankier than normally an archer would be. Thanks to how flexible the class system on TOS is, I came up with the following build: A1 QS2 H2 F1 What I like on this build is that it’s somewhat focused on piercing down the enemies’ defense, as well as having a balanced amount of AOE and Single targeted skills for either solo or group play. Having two companions at once looks nice as well. Does this …

Cringes at the build

Mine was a wall of text apparently lol

I’d rather not link it cause it’s soooo long. Makes me sad tho remembering how quest bosses used to be more fun back in cbt before they were heavily nerfed.
I would have loved to have some challenge with them cause there is a lot of bosses! But instead all the quests are just fast pass throughs now cause the bosses are so trivial.

I’m just rambling again but I was really excited by this game originally cause there were so many bosses and during cbt it still looked very promising.
Now all those quest bosses that could have posed hours of entertainment and maybe even make rerolling fun (lol who knows) but I guess thats too much to ask.

My feedback on linear progression and other stuffval

Edit. Added it anyway lol, I stand by what I said about linear progression I don’t mind it at all and I think they have given more variety with ways to progress.
At least they did something right.

Getting stuck in cutscenes

Uh, I was hoping for a fix on the patch note then I saw this post, the view and the GMs and staff answers thinking "oh maybe they did something", but the GMs are scary… I won't even bother quoting those bots. Can we have a (useless too) "Report GM bot" button, please ? How can you be so robotic when there is so much people experiencing the same issue. It's really scary, if we trust you, it means that you are working on it since 17 days. Just for being stuck? Hell no. I'm GM in one Ragnarö…

Uh, I guess I became doomy soon enough.
Pretty fair if you ask me, since I was a new player and I get this kind of behavior coming from the GMs as a welcoming.

Exploit bloodstone! buy or not buy

Server : klaipeda Team Name : Location : Market Approximate date / time (EDT) : 2:16pm Evidence reviewing the market wanted to buy a bloodstone when I saw 463 stones in 80s what??? cool again … … are no longer piled them in less … I’m sure it’s the same guy i all gems are of the same origin investigate someone plz …

not reach to take a picture to freshen were not gms plz!!! [image]

When I had hopes in a fair server.
I do not care now

Sorry if this violates the rules of this thread but I felt like this post deserves a mention.

Member of the Yearval

Oh god such a throwback that forum goer was so toxic and I can’t be happier that he is not active anymore.

It was so funny he took my sarcasm seriously I’m laughing too much at this. omg.

I was going to look for mine but, screw it lol, I’m here every single day, I at least post 3 times, I would guess my average posting is 15 per day and I’m here since Jun 2015 you can guess how much I’ve been posting lol.

Can’t find it, so sorry I can’t participate into the fun.

Pay2Win, what are your thoughts?

I hope they grasp what we western players like to have and adapt their game to it, i mean, its an asian game, most companies from that region develop their games with p2w since many ppl dont have time to expend or dont want to expend much time to reach max potential. Honestly, cosmetics are the way to go on actual online gaming (specialy MMO's), PoE is an example of that.

Here you go Niri, lol. You weren’t kidding about the amount you post jesus.

[FIXED] "You are not Beta tester" too hurtful Suggestions

No. It´s simple and quickly. 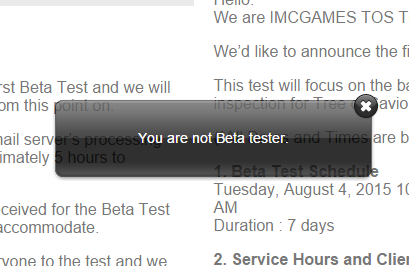 [FIXED] "You are not Beta tester" too hurtful

Hah! They changed it! That's so cool of them. xD I hope they continue to care for their users like this when the game is released.

Yeah it was a fun idea imo lol I like throwbacks.

i know right hahah this forum is so funny xD

You actually cant even see my first posts any more because the forums got changed.

They don’t even show up in my posts list past a certain point.

Would it possible to please make these forums read only for people who actually have not even played in the forums so real input about testing can be given? It's extremely hard to see actual serious input from experience playing over the person whose read wiki or watches Youtube videos just throwing out suggestions or opinions. Also it would cut down on trolls making 1,000,000 forum accounts just to flood a topic with misinformation and such.

@ophiuchu I and many others will prob have the same proble, just post your first post that appear on the list… or is it the last

I was plague with problems since the start

This right here is one of the biggest problems ever. You have about 3-8 items within the same required level to equip but they are either the same damage more depending on the item level and not required level to equip. It makes things like the progression from 25 to 40 a real drag because your damage falls off really hard for the last few 10 levels. This could easily be fixed by spreading out the required level for equipment and tweaking values on things.

FullScreen is not working correctly after patch Graphics

My actual first post was about me giving away a beta key, and I told someone to sing Oingo Boingo Little Girls and someone actually delivered and got the key. I swear, I’m not lying and the thread was deleted. If there was a way to see archived threads I would show you.

This makes me remember the old days for when I tried to get people to use my terrible thought out builds (I seriously thought it was good, until I got better etc.) Even had people talking about me on other sites 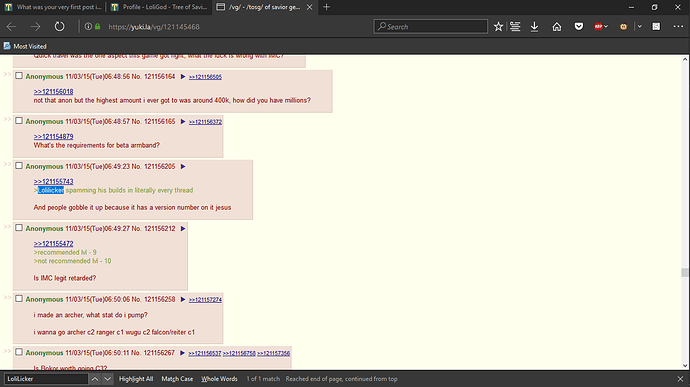 Also remember the time I got my username warning, even made a thread about it. Now I’ve got a more appropriate name by IMC’s standards