BOT_Francis and the "forum manager team"

Hi~~ we all knew that IMC likes to respond to our report tickets by auto-reply bots or some kind of similar program. But, these respond on bot-report channel has pushed it to limit

You can check out these fake post made by a botter himself to revenge people who report him:
https://forum.treeofsavior.com/t/merchant-botting-guild-please-ban-them/414791/10

Alright, if you are lazy to read, here is the TLDR:

It won’t be a problem since the community already known that the reporter is a clown trying to cause some drama…but here is him, the “forum manager” named @GM_Francis respond

Those are just “normal” respond from Francis, but they are on a totally wrong-evidence reports, it prove that Francis himself was not even reading the context, nor watching the evidence at all

Bots are still in Baubas, yet my Guildmate is banned?! Gameplay Reports

Hi, I writing this hoping to get my friend/guildmate justice. He doesn’t have the luxury of having crazy good RNG in this game, so the man just ended up farming Baubas like a mad man, whenever he isn’t running things with the group. He basically sold his soul to Baubas, watched like 20 movies while farming… lol. And some how he got permanent banned for that. But yet the BOTS in Baubas are still there. Not ban??!!??? Ive attached screenshots of the 2 bots in Baubas. Noticed their names. No Bot…

That’s all i want to tell, i know it has been happening for quite long about tickets and stuffs, but this push it above “Acceptable” line of their “forum manager” job

Our monney spent for TP are used to pay for this useless slacking guy.

Why i didn’t post in bot-report channel you might ask ? CAUSE WE POSTED THERE GOD DAMN 4 TIMES AND NONE OF THE STAFF EVEN GIVE A F*K

So. I did become a good citizen and flagged his posts instead coz sure, Let’s give their “System” a try. so here’s what happens: 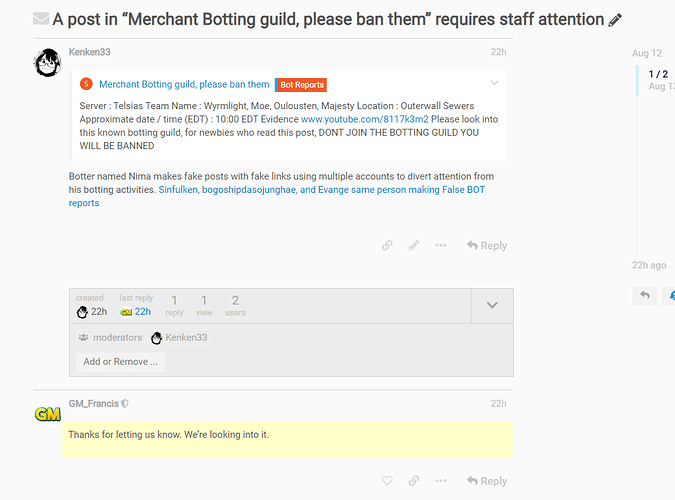 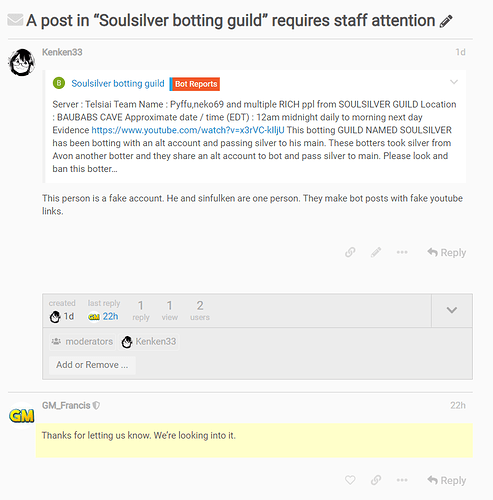 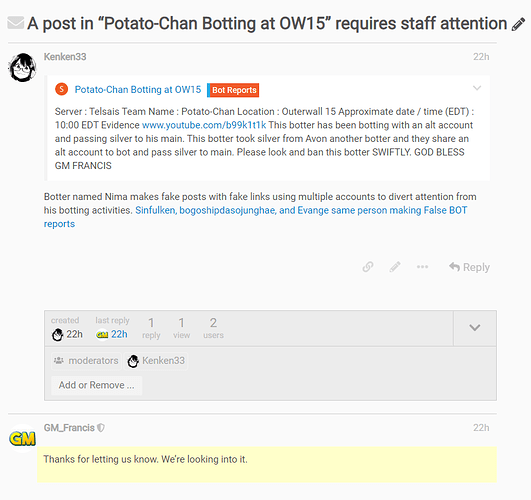 Bruh, They removed my post that had a GIF faster than this clown show

holy crap this is awful

it is so weird that even when i pinged the staffs and Francis on a shitpost about themself, the post still stay alive for that long

what are they even doing

I wouldnt waste much time on this topic or problem, I too made the same mistake in the early days of thinking they cared, I personally spent about 4 months hounding multiple GMs to get 3 of the most notorious bots in Klai. history banned.

It took me about 40 forum reports/threads and spamming GM Francis in game any time I saw him in shout to get the bots removed. With the new changes to silver being removed they are not going to enforce botting in any way, you are just screaming into a pillow posting here.

Klapedia - Momohime - oldest bot on the server, nearly 100million botted over the last 3 months, I cant believe I need to post this nonsense

Yep, another day of GM Francis and/or Sebastian gracing us with their presence on the forums to reply to harmless lv1 shout bot threads while they continue to ignore the 20-30 threads on the same x3 lv220-240 chaplin bots that have plagued Klapedia since week 2 of founders access, as always, MaJie, Momohime, and Snowdance are free to bot Vedas Plateau 24 hours a day with no GM interference, b/c hey, aslong as you don’t type something in shout in a bold font, you can do whatever you want here at…

DO YOUR JOB IMC, Klapedia players have been screaming about these 3 chaplin bots in vedas plateau for almost a month now, ENOUGH IS ENOUGH read the threads, how many more people need to point these 3 out, they are all run by the same “person” I use that term loosely

Found a bot in Vedas Plateau Server : Klaipeda Team Name : zrin Location : Vedas Plateau Approximate date / time (EDT) : 1:35 AM Evidences [image] Part 1 Part 2 Part 3 Additionally i captured a photo of 2 of the famous trio (MaJie and Snowdance) [image] Please do something about them.

On Klapedia we have had an unholy trio of lv 240 chaplin bots since founders early access that have ruined Vedas Plateau farming for everyone; Snowdance, Majie, and Momohime. Recently after about 35 forum threads and 100s of in game reports IMC staff banned Snowdance, but Majie and Momohime fell through the cracks. Tonight (7-6-2016) GM Durian visited the server, and came to Vedas Plateau by request, he banned several lv216 to 245 bots, most of which were chaplins with the exception of 1 sorc, …

Almost a week now and the gm or any of the staff are no where in sight. At this point, I doubt even burning the forum up in chaos and mass false reporting will even get their attention.

Hey guys, a strange thing going on, yesterday I wrote a comment here said that we should email kTos team and complain, I’m very sure that I dont delete it, my comment gone, and also my topic capture my email send to kTos deleted too, what happen, my post dont even be flagged.

Hmm, yeah I remember reading your post too. It’s supposed to come before my last comment. Dang, @GM_Francis is fighting back.

Something’s fishy here… hope GM’s are not hacked or wut, maybe they resigned? that’s
why only scripted bot replies are working. Because if they are working for real… they will do the job
properly. If you noticed all “we will investigate this report shortly blah blah” replies… it takes years but no action right?

posted Oct 1, 2018…
a little too outdated for a new doomsday

season server bots got reported by some ppl week ago,provided with evidence, and todayi still see them botting accross maps

i ve come into conclusion
simple
they just dont care, and probably wont
especially when the bots loaded with tp stuff like growth package at minimum,things that can be channeled
they should kill the free-rider bots first, but given they still dont care about them too means this free-rider bots also plays important role to make the server look “alive”
killing them first will also show that they protect the p2w, even when they botting

i still appreciate the no silver drop update, but its still feel like a lazy solution by sacrificing core aspect of open world game, making the game more instance-neous style game. like how i previously disappointed about free stat distribution changes and crafting mats drop

this game isnt loaded with many players, especially players who actually pay
when they kill this p2w players they slowly kill the game too because of losing profitable player
but when they dont they still also losing players who rage of staff incompetency of handling rule violatior or just envy due to inability to bot
though they lost more if they kill the botters
their choices are like

[there could be more choice, solutions that looks good on paper but when its costly they just wont do it so i wont even bother to write it down]

only by huge massive rage quit the bot will find it pointless to botting anymore, then the bot will leave, but then will those rage quiters back too? lol

so in the end with this imc attitude against rule violator why dont you just bot if you have the chance
if you dont, or cant, the salt remains and thats when you feel like the need of report
ikr