Bots are still in Baubas, yet my Guildmate is banned?!

I writing this hoping to get my friend/guildmate justice. He doesn’t have the luxury of having crazy good RNG in this game, so the man just ended up farming Baubas like a mad man, whenever he isn’t running things with the group. He basically sold his soul to Baubas, watched like 20 movies while farming… lol.

And some how he got permanent banned for that. But yet the BOTS in Baubas are still there. Not ban??!!???

Ive attached screenshots of the 2 bots in Baubas. Noticed their names. No Bots would have the name “Tasty Strudles” (which is my guildmate’s name).

Please look into this, help my friend out. He reached out but IMC wouldn’t tell him the reasons why he was banned… 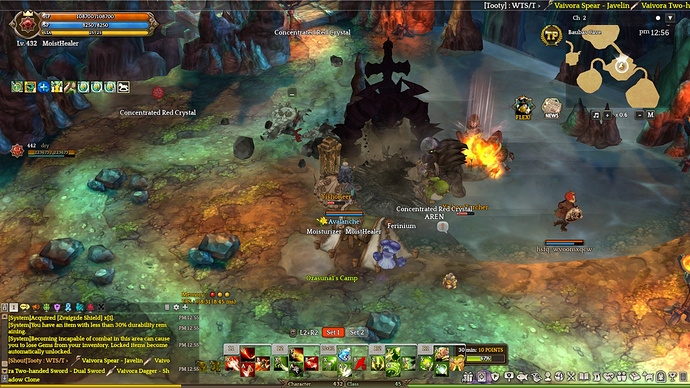 **edit: I only allow to posted 1 photo… but the other bots name: hjuiewncx jkkh

the BOTS problem @ baubas cave is unreal, my guildie and i managed to come up with a rotation to SHARE the small part of the map thats not infested with BOTS and you ban him, like really? i like him, (because he taught me) grind all day with him or w/o him, every time we have some sort of free time we spend it FARMING we chat we afk we come back to FARM becuase thats how we play, thats how we make our income, yet you guys decide to ban a REAL player instead of the 5 bots in BOTH channels (and dont get me started on the hundreds of BOTS in other maps), that are there ALL DAY EVERYDAY, its ridiculous how ignorant and lazy you guys are

Baubas is where bots go to farm. If you’re down there and they do a sweep of the place, and your friend doesn’t answer a GM, he looks like a bot just like the rest of them do. The bot owners are also probably the ones reporting any legitimate player down there like they’ve done in the past, because the guy just makes infinite bots and IMC refuses to ban RMTers, he will continue to do so indefinitely.

i been at baubas almost everyday whenever im not doing cms for the past 2 weeks, i have not encountered a GM EVER and i play with a controller so all i do is move and press 1 button auto atacking while im watching tv i hardly have to pay attention, so i dont think GMS showed up and did a BOT test, they targetted him especifically becuase the BOTS right now right this moment, are still there

Baubas isn’t the only place that bots go to farm lol sadly. I think he was falsely reported, and since he farms there a lot they thought he was a bot. I hardly see any GMs when i go there to farm, it’s not fair that the only odd time GM came, talk to him, but maybe he wasn’t looking at TOS screen, hence he didn’t answer. That got him ban?! Don’t they see the patterns on bots names, fake guilds, etc…? Idk this is just sucks, spent so much time on the game and for unlucky ban.

They need to really watch for this, before this happen to another player, what happened if its a veteran player. Spend times x money and boom! banned

There was a GM on last night apparently, it would not surprise me in the slightest if they swept the map.

There are bots there because there are hundreds of bots. They can sweep the bots up and 10 more take their place. If you are mindlessly farming and not paying attention, you are at risk of being banned because to a GM, you are no different than a bot if you don’t respond.

They need to really watch for this, before this happen to another player, what happened if its a veteran player. Spend times x money and boom! banned

Veteran players don’t farm in Baubas, because the only reason to be there is if you’re a bot. Why would any legitimate player go down there to deal with the stupid gimmicks and make less silver due to competition with bots/maybe other legitimate players? You make more silver doing almost anything else. I’m not saying your friend botted, but if he didn’t respond to a GM, why would a GM suspect anything other than him botting?

This is the same BS every support ticketing service says, can’t disclose the incriminating evidence, like how the hell are you supposed to defend yourself it’s borderline tyranny. Iirc Luke from floatplane formerly linustechtips had the similar case being banned from WoW he had the pleasure of being vocal about it on a large platform and got unbanned, sucks cause non youtubers/streamers can’t do anything regarding this.

True, agree with that you said. Ultimately, what im trying to do here is to see if there anyways GM can look at the case again, since he basically didn’t do anything wrong. Just a recent player trying to grind for silvers. Also, It’s of course hard for you or anyone to sympathy for his situation if you don’t know or aren’t close to him. It’s easier to say, that sucks you blinked and didn’t answer. GG lol

edited- Yup, he went to let his dog out, he was afking IN TOWN. Before that, my teeam and I were literally cming with him

clearly you have no idea how to grind, baubas is a legit decent way to make money besides CM7, cm7 takes 10-15mins to finish for 1,5m, a movement speed capped SR can make 1,3m in 10 mins, you dont know what youre talking about so go back to the hole you crawled from, basically youre saying if im sitting afk in town or any other random map and gm asks me a question and i dont answer im a bot?

BOTS have moving patterns, random names, teleport hacks, speed hacks, and idk what else its an easy job to identify it, his ban was just a random lazy ban that couldve happened to me or any other REAL player but luckily i went to bed early, they refuse to provide PROOF of his ban and refuse to talk about it plain lazy ignorants GMs

Yo GMs can you atleast give him a proper response to his ticket. Saying you cannot disclose any information for security reason is ridiculous. Its his account, he should know why and what exactly did he do to deserve a perma ban. A simple chat log on how you guys “tested” him if he was bot should be good enough.

Also there could be many different factor how that testing could fail (assuming thats the only way you guys test for bots) Why dont you guys just Teleport them out of the map let them sit there for a couple minutes and see how long it would take for them to respond. If a person is legit farming it should take no more than 1 minute for them to respond.

Listen, I dont give a ■■■■ about this man who got banned, but what i don’t understand is why the owner of the account cant get any information on why and what exactly did he do to get that ban.

Why can’t the game have a better bot detecting system to make the game experience enjoyable for everyone.

You are a joke… really bro? “The only reason to be there is if you’re a bot” see’s skippy’s tent. YO BAN SKIPPY PROBABLY BOTTING HE IS BAUBUS LMAO. (dont im being sarcastic) llolololol

Not true, but what is true is that you make about 1m raw silver in a CM in about 10 minutes if your group comp is correct, plus loot to sell, so you actually make much more.

BOTS have moving patterns, random names, teleport hacks, speed hacks, and idk what else its an easy job to identify it, his ban was just a random lazy ban that couldve happened to me or any other REAL player but luckily i went to bed early, they refuse to provide PROOF of his ban and refuse to talk about it plain lazy ignorants GMs

Plenty of people bot on their main accounts, just because you don’t see them doesn’t mean they don’t exist.

Listen, I dont give a ■■■■ about this man who got banned, but what i don’t understand is why the owner of the account cant get any information on why and what exactly did he do to get that ban.

He knows why. And your 3 consecutive responses proves that you do care and are very angry about him being banned.

Again, there is no legitimate player in Baubas.

first of all saying SR cant do as much PROVES how bad you truly are at this game.
Second, youre just a pos troll whiteknighting for GMs how pathetic do you have to be they dont care about you or me or anyone else, its their job to look into cases and as such they have to do it right, so please go ahead and stop posting your ignorant bullshit thank you.

5 days have passed, he is still banned, still no proof of him breaking the rules, REAL BOTS are still @ baubas 24/7, only thing is you guys managed to ban the 1 actual player that was farming during your bot hunting sessions and ignored the 5 REAL BOTS GJ GMS working hard as always !!

Simple answer, @GM_Francis is also a bot himself, bot can’t know what is right and what is wrong

and bot can’t ban bots too, so there you go

Deer Savior,
please post the part of the rules that say “killing monsters in map xy is legal and will get you banned”.
Or stfu

But he was watching TV while farming

still his fault, can’t expect GMs to know that
every actual botter would say the same thing

but I swear its not just bots in Baubas, its good money for real players too

then play normally and watch the screen, no reason you should be treated like a bot and ignore GM questions

but muh freedoms to play any way I want

There is a line that has to be drawn, if you act like a bot you get treated like a bot, otherwise real botters would use the same reasoning to get their accounts unbanned

Soon there will be no silver drops anyways

If you’re not a GM, I don’t know why you bothered to post. Maybe let the actual staff do their job. At the very least, it should not be a permanent ban for a first offense.

2 weeks bots still grind 24/7 and he is still banned with no proof or real answer from a real gm, working hard gms