Why is ppl quitting ToS?

I left the game 2 years ago tried to comeback and left again . I can’t stay more than 2 weeks.
So many whales, unbalanced classes, weeb game and community (look me character so cute :3 desu kawai kya ^^^)+ arrogant and haughty (from my own experience on Fedi server), IMC literally dont give a damn sht about the game and they’ll keep giving you fake hyper and empty contents as long as they are still whales who keep throw thei cash and consume the 2 or 3 endgame activities, as i hated it on Ragnarok Online the stupid RNG, the meta iamgine advertising about the 100+ builds but still seeing the 2 same builds for each tree, and of course OF COURSE the worst pvp content i’ve ever played . Ye i left but i still come on the forum and hope maybe one day IMC will announce they sold the game to a real studio (Square Enix xd)
sry for my English btw

TOS is a computer game and not a cell phone, I don’t understand why putting this random item deal in this game, if it’s money you want, Leave the game PayToWin, which, is not far from it

Tos is P2W who ever makes the argument that a game isn´t P2W if you still can get the items without paying was stupid.
Remember the last Pet in Letitia or godesscube?
You could sell it for 500m how many weeks you have to farm for it ingame?
Money gives a clear advantage there is no deniying.

That’s exactly what I said lol

People are always leaving the game, because it’s ■■■■ from day one.

Imc is doing nothing but perfuming a sewer.

And the game is going on only because people that have spend over tousands of dollars, and time, won’t leave.

So, the forums are full of old school dogs. And I belive that all we are waiting is to the game to die and rest, or to be sold. ToS is charming and could be so much more in better hands.

And the resilient players are going away. And the new players will never get the second char to max lv, or addapt to all the, so called, endgame content, that keeps growing and pushing players away.

I’ve been waiting for support to fix a very simple issue for me.
I have had the same problem on other games resolved within days, yet it has been 2 months now and support still says they are working on it and to have patience.
I am not interested in actively playing until my issue is resolved so I just log in every now and then, shake my head in disappointment and go back to playing or doing something else.

What are the reasons why people leave ToS? It is a question that two years ago was more than answered, but like all the ghosts of a sunken ship, the question remains on the table … without being resolved by the will of the ship’s captain (IMC). Point by point, the reasons are more than clear;

To end this comment, just quote an old one … that still, sadly, is still largely in force.

13 Likes
Improving New player Experience
New expressive update when?
How do you see TOS lately, RATE it!
Once again an absurd difference from the Korean server
Boruta Seal System made 30% of the invested players quit
What happened to Tos? Re:build destroys the innovation
The game is DYING!
Yet another thread about problems with ToS
rodrigoofmana1 August 13, 2019, 3:31pm #141

InGame - Where are the players? is soo empty, look, there is nobody going on DGs

another point that makes ppl stop playing from time to time is the time gap from content on ktos and itos. Its infuriating seeing all the mountain of content noon stop reaching ktos, while on itos we have to wait for like 2 to 4 months to see delayed content with the sames bugs and some news.

I literally quitted about half a year ago, back when the dramas were flooding the Klaipedia server on the pillar-afk problem.

Usually I wasn’t involved in any of these dramas. I got personally attacked in public by a guildmaster of one of top guilds. I was sucked into the dramas this time.

As reports came in about the pillar problem and dramas escalated, IMC took no action whatsoever. Drake raid was dominated by the guild who openly afk-farmed on pillar, and hate speech flourished on forum non-stop.

At some point along the dramas, I lost interest in progressing my characters ( BTW, they are super cute ). I played the game as if I was playing a sport with friends for fun. It wasn’t fun trying to farm for progress when you saw people did the same by cheating.

I have logged 3000+ hours in game and probably have spent 1000+ USD for TP in total before quitting. I was fine with paying to skip some grind in a grindy game, as long as it could create a fun experience. I only felt more stressed after I logged in the game daily.

I just came back on forum to check on what’s up with TOS right now. I don’t think I am playing TOS again after reading around the forum on what has changed (which is not much). I noticed several people got banned. Welp, of course…

i wonder if slowing down gearing progress would help not make peeps gets frustrated. and put more focus on social apects of the game for players to take it easy on the gear grinding. i for one is hopeful to see the housing system of the game Owo

though as i remember in the popolion post, devs are supposed to focus on personal housing rather than guild housing at the time, and there has been previews of it, i sure hope both housing will be released owO

housing system is another proof they dunno what they want. We had a klai rework to make feel the new players they are joining a living game. So Klai has been reworked to be the place to be. And it worked there’s lot of ppl chilling and socializing (and destroying the idea there’s a whole world with thousands map around xd). And now they put this guild housing system. Players will either ignore this place and still chill in klai (and i hope this will happen for new player) or players will live there with their guildmate (to avoid every village drama in the same time) and klai will be dead as fk.

imc just took what worked in Maple Story2, Path of exile…but to make it worst of course cause, behind this there’s still no vision as always. Every content it’s just a way to grab what the others games did better. I remember this arrogant speech from Kim “i don’t want to make game like the others, i’m so orignial, for exemple there will be no thief in ToS cause thief are mean blablabalbal”. And see, now you will have arts from league of legend skills. So original. Now i hope for you the new housing system will be a pretext to make you win some reward for housing during events. you will all be happy with your Whale Statue rewarded for a summer-t9scroll-laeticia-godess-cube event ahaha

the housing thing sounds at least interesting, its a different way to spend your time other than killing hordes of mobs… i m more excited with it than the arts system.

It’s the long grind + RNG that i hate.
They keep introducing new system to grind for, and they made sure that bad RNG has to be involved in every part of it.
And when you finish that long ass grind for once, IMC be like

“Hey, here’s the new episode with all new stuffs. Do everything all over again lolol”

when i realize i have to do it all over again after all that,
failing enhancement,
wasting a lot of powders/magnifiers then >>
failing ichor,
bad roll jewel,
bad roll Awakening,
for 5-6 pieces of gear
especially the enhancement system,
this ■■■■ gives players nothing but frustration.

i don’t even want to mention all the bad classes adjustment because we all know they won’t listen anyway.
and i’ve already quit for quite sometime now so,
peace.

you should come back the guy that harras you no longer plays and if he does , his new guild master dont let him speak xd

well, it’s what the survey results on what the playerbase wants though Owo;;;

well other than that, there’s always the option tu let peeps into the guildhouse owO

Yes, layers of RNG make it so when you get a new piece of gear instead of being happy it looks like (and is) a chore just to get on par with your previous set.

I already have the ichors, so at least transferring them is an option once they are made. There are ways to fix this. It is fine to have enchants and awakenings in the game, but just stop with the RNG. Reduce the overall values and let the players pick their enchant. If you want some varience, make it between 3-5% and not 0.1 - 25%. Same deal with awakenings.

Then, address the upgrade system as previously harped on by the community. Reduce upgrade cap to something reasonable and cease with the success/failure model. Make it expensive to upgrade but guaranteed with the correct mats.

Same thing with Seals, the needless RNG and huge investment with a chance to fail is really off-putting past +2. Sure, make it expensive, but at least allow a 100% success rate if you make the investment.

Its no RNG its: surprise mechanics 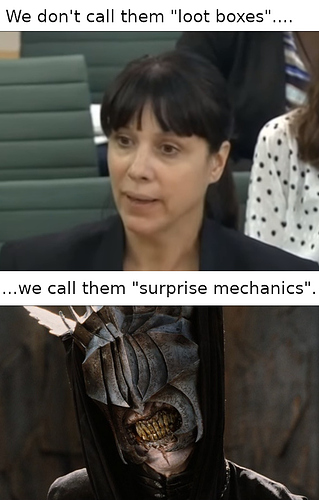 i wonder if slowing down gearing progress would help not make peeps gets frustrated.

I think it is the opposite, and it is difficult without decent gears to do PvE. The frustration comes from too many RNG, plus new players are not able to catch up, where our guild has a level gap.

Regardless, I still feel it is missing the purpose of getting decent gears.

They keep introducing new system to grind for, and they made sure that bad RNG has to be involved in every part of it.

Because the game is empty, RNG can keep you playing (paying), while they get some new content. However, most games have a core feature (end game), and new contents are expansion, but this game has incomplete core feature.