The gap between 2h vs 1h+sub 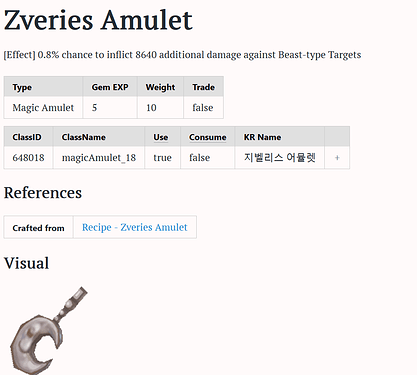 image979×878 69.3 KB
an extra ultra low chance to deal flat damage?
the problem is not the chance though but totally the whole effect
and so far none of these magic amulets items are good to me
if this is the future of 2h the disappointment continues
KToS General Thread v4.0
Hmmmm December 2, 2019, 1:27am #2

That amulet (and all other) has been created in 2016 and was never used in the game after early Betas.
They used to be totally different and not related to 1hand vs 2hand.

Didnt saw IMC mention them again. And if they would… the effects would most likely be changed

I still swap to 2h weapon for gvg, cos that extra atk can make difference.

Most of pve videos still use 2h, even many here keep saying 1h+shield is better.

Any 2h weapon buff is welcome but don’t necessary need to be as good as 1h+shield defensively. Imo it’s good concept for pvp/gvg required you to have both 1h and 2h. It’s the end game in any game anyway.

they call it ornament btw, not magic amulet
and the effect is still unknown
but i agree that 2h require some small buff
like more gem slot
1 is reasonable, 2 is awesome and bring back the benefit value of 2h
because back then even legend shield max gem slot is one, and some old gear with low def can got two
but now 3 gem slot is the meta for legend shield which makes up to 6 slot for 1h+shield
when one of the benefit of wearing 2h supposed to be able to get more gems(1 extra gem), now its a disadvantage of losing 1 gem slot
so adding 1 gem slot is reasonable and adding 2 bring back the ol benefecial of pursuing damage over def

this is one of many.
dont forget 2 enchant jewel, 2 awakening,2 effect, 2 extra ichors than can equalize stats(except some 2h unique effect which is the only advantage to me now)
say
with 2h weapon+ichors you can get 90+ con, 200+str
with 1h+ichors+shield+ichors you can also get those same stats.even better due to more random ichors variety

swapping is good option, especially when its an auto swap
i would love to do this when i can set certain skills to work only with 2h weapon
say when im exo i want to be able to do rubric using 2h weapon skia maul ichored in my swap slot but thats it, i want to use rod+shield for the rest cause i found it more beneficial currently 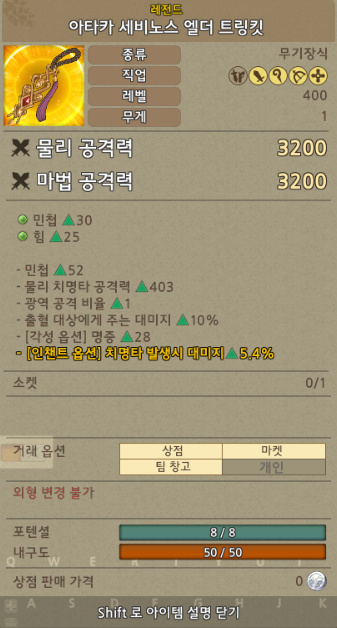 All the meta PvE builds were already 2handed, how is 2h getting the short end of the stick. Less ichors, but higher max stats on ichors, granted it was not as much as 2x 1handed ichors, but the extra attack should make up for it.

This ornament thing is way overtuned, and 2h builds are gonna so goddamn op compared to using a 1handed that its not even funny. Whats 12k pdef gonna mean when you have 70% and somewhere around 58% for rapiers, of the attack of a 2handed weapon at best. Attack is the best stat in the game.

image881×417 141 KB
Sure, scouts and their two handed daggers and pistols are PVE meta…

This ornament thing is a needed change. Both PvE and PvP.
Just to let you know too, the 7º is a Matador Fencer (two handed Rapier too?)

The pvp in this game is horrendously unbalanced to start with, and that has to do with the classes themselves rather than what weapons they wield. It’s also true in some regards for pve as well (see - meta classes)
And if you ever bothered to check the damage formula, you should know that the physical/magic attack is extremely important. Stats don’t actually provide much in terms of attack.

Regarding the enchant jewel stats…you can have those damage decrease enchant jewels in any armor piece, if you so wish. 5 enchant jewel “slots” is enough to get all the important ones, anyway.
And you’re saying yourself that people still use two handed weapons classes…it’s just that they abuse autoswap to do so, since they can do it. If anything, they should fix autoswap so that you can’t have the advantages of both one handed+shield and two handed weapons.

Either way, you’re getting that additional socket, enchant jewel and awakening, and that thing seems to have ichors of sort. Thus even the stats will likely end up comparable.

So why should two-handed weapons + ornament end up having better physical attack than one handed+subweapon (not shield, of course; that should have inferior attack on lieu of giving better defense)? If they’re supposed to be comparable as well, then that ornament is totally overtuned by now. But fortunately is still in test, so they can tone it down before the release (and require substantial enhances and trascendences to do so - even the costs must be comparable, after all).

Oh, the irony.
Bernice is the exact place where a fencer/matador should shine, given it always has the aggro (thus added damage for matadors) and can have the enemy in front all the time (thus efficacely using the epee garde art). It also has no benefit from shield - can’t block due to offensive rapide, no defense due to epee garde - so defensively speaking is in the same place as two handed weapon classes.
And despite that it’s only 7th place. Worse than some of these oh-so-terrible two handed weapon classes.
Granted, this doesn’t say much. We don’t know what equips those people are using. And some classes are definitely overtuned (scout/assassin/bullet marker/corsair isn’t widely used cause people like being pirates, it’s cause it is strong as hell). But posting this screen as some sort of proof is rather foolish. I could post Fedimian rankings and they would show some different results, but so what? Same as above, we don’t know anything else about those chars.

Serve as proof that two handed don rule all in PvE

berniceScreen1335×595 209 KB
Clearly this means that wizards rule everyone, even the OP scouts.

Nah, it still doesn’t mean anything.

it mean maid rule us all lol :v

well i think u can try or use anything u like in PVE , theres not need to discuss about this anymore.
since this will going to no where D:

But since they seem to be so evenly matched (with more 2h builds being viable than 1h mind you), then why is 2h getting a huge ass attack buff while scout is getting almost nothing in comparison from their sword attribute? (assuming you can trans ornament)
Obviously pvp is a totally different case, but in PvE 2h weapons really didnt need this huge attack modifier. Clearly 2h weapons were already pretty strong, and didnt even need the extra socket or ichor to compete.
Besides that is 1 (one) build that is obviously way overtuned in SFR and modifiers to make up for the fact that scouts cant wield 2h weapons. That build will even require 3 weapons when the sword attribute hits. Yuck.

“How is 2h getting short of the stick??” lol…u have seen nothing, 2h is all strong and shiny until u go to pvp,GTW or feud where u can see the real difference.

I obviously wasnt talking about PvP, getting the ornament for enchant, ichor and socket is all well and good, but it really didnt need attack. Besides classes like Lancer seem to be doing just fine in PvP?? (In Fedimian) Maybe you need to look at your class choice before you look at the weapon type.

why is 2h getting a huge ass attack buff

You have to understand that the Ornament came to balance the gap in PVP, that’s the sole reason it was implemented and all the complaints were on that direction.

By default 1H weapons are going to be weaker than 2H weapons, doesn’t matter if you use a sub-weapon or a lollipop or a 5kg Dumbbell or nothing.
Classes like Fencer cover that lower attack from Rapiers with lower cooldowns and more multi hits on their skill set.
Rodelero covers the lower attack from 1H sword with more damage modifiers, damage reduction and even a portion of your shield’s defense to your damage.

anyone have patch link of when shield def increased??
this is the only thing i can bring up as example

take a look at this example
6 times old value isnt that another huge ass def?

the grudge is real