Depends on how you look at it.

Kneeling shot is an extremely special case in which it will forever benefit from DEX way more than STR.

But the question isnt is DEX or STR better for kneeling shot.

It is about whether you will only use that move 90% of the time or will you use your other skills.

Most of the time, your other skills will benefit from STR more. There are some exceptions to this rule.

@judex
Please do some research before you go around telling people what is good or bad.

I’m at work and haven’t really dived into the sheet because phones suck for checking excel.

The question I would like to ask is if your base character assumptions are OK. I only took a quick glance, but it seems you are assuming 500 base atk and 320 equipment crit?

I think an end game archer had something like 1200-1400 base damage before things like squire weapon buff and collections. Would shift eveeyone to the right at least 800 base damage.

This doesn’t really affect the conclusions, but it might affect where along the line of str/dex people stand.

It is interesting that the number for crit to take over is so high. Id have assumed it was much lower…but then again I was doing the math for Kneeling Shot, Running Shot, and Snipe so I was very biased with my excel conclusions.

1200 base damage with 0 strength and not counting elemental damage?
500 is just the weapon, and is slightly high to account for some misc effects. A lolopanther 2h sword is only 450 average, without upgrades. More powerful gear will shift things towards dex, as you say.

At any rate, all the examples use default base stats, such as archer’s crit rate/level and all character’s 1 attack/level.

Nice theorycrafting. Helped me to find a base damage threshold for a full dex build. It’s really high though.

Could you also add some calculations for a hypothetical cleric and archer, using their most common crit buffs (Monstrance and Swift Step: Critical Rate)? And maybe swordie with finestra.

Flat crit rate doesn’t change things much at all really. Unless you’re rubbing up against 100% or can’t manage to clear crit defense, each point of crit rate is worth as much as the next.

What a f***** awesome job, you sir diserves a gift. (aplauses)
I will be glad if you just see if I got this right.

FACTS about my build:

And here is my self conclusion after playing a little with your spreadshit.

Thank you so much.

Fletcher 3 skills will be pretty close. @EternalRift makes a good case for 1000ish non-skill/stat damage, and maxed out Fletcher skills all have 2000 skill damage.
Especially with an archer 2 build.

Good guide, but anyway if you talk about str/dex for pve, its simple, full str its the best way. You can spend points into dex only if you want to join pvp (which is closed now haha)

so in the spreadsheet the last tables use gear that have 320 crit. how feasible is that for archers and swordsman?

what is a more likely endgame base crit?

@dmhamilt
Thanks for answers people’s questions for me. I really appreciate it.

@atari
I’ll get around to doing it.

@XFelps
I don’t know for sure how exactly Finestra changes things. I will have to make some tables for it. I would, however, consider those as a bonus to crit rate.

@kicktrickz
I’m not sure. I would assume that would be near endgame values.

the 150% from the Siege Burst is a T1 modifier, but I’m not too sure about the 5x damage on structures.

Hello~ I do have a couple of questions to ask,

The table is still effective right? so

Correct me if I am wrong, based on Lv 280 mobs and char level, and my expected equipment stats as shown in the pic, I will need to go pure dex as a Fletcher to maximise my dps potential and as I have been adding 1:1 str dex ratio, and am currently at lv 150, I shd go full on DEX for the rest of my lvls to save my late game dps and reset to full dex if possible? as 149 dex apparently yields almost the lowest avrg dps ? This is like my 3rd fletcher, dont really wanna re-train again =.=! (I am currently A2>S1>F1 going for F3)

and/or should I forgo crit rate equips and focus on crit dmg + phys atk? while going for full dex for the rest of my levels? I currently have a sissel and gladiators band, 3x crit rate headgears to use, should I go for double gladiators band and atk/critatk headgears instead?
and for weapons would be 3x greens for khasti bow and 4x greens for xbow and offhand or should I go for reds?
have been focusing on upgrading greens all along tho =/

Will skill base dmg include attribute lvl? for instance 2k base dmg + 50% attribute, we should assume total base dmg of the skill to be 3k?

Questions about the table: 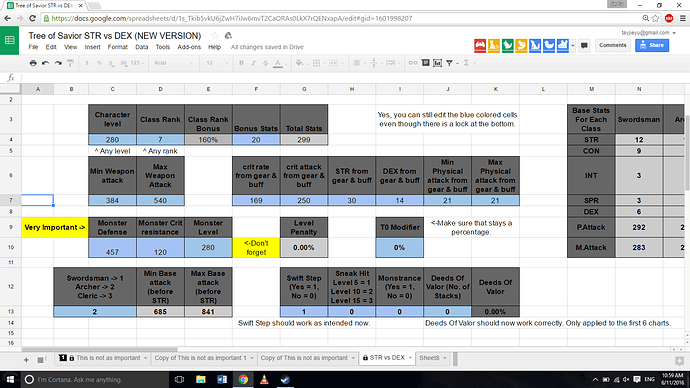 Yes, it is still accuracte.

Pure dex, not so much; more so of however much DEX you need to reach 100% crit rate because at endgame (not lolopanther) you can get roughly 60% crit rate. Usually it’s around 100~200 DEX.

I would rather focus on gears that give crit rate than damage, so you should be fine.


No, skill base damage does not include attribute level because attribute is applied at the end of calculations. We only look at the first section of the damage formula for this because everything past critical hits are multiplicative modifiers that both STR and DEX builds benefit from.


1.) You plug in T0 modifiers where it asks you to. There are very few skills with T0 modifiers and you will have to look at [Damage Guide] The big formula, modifier types, and how they interact! for a list of them.

T1 is not factored in this for the same reason attributes are not.


2.) What do you mean only DEX is included? It’s the total stat points you put into it. The first and last one should always be full str and full dex respectively, but you can change it if you like.

What it is supposed to do is to give you some comparison of how much STR and DEX will do to your damage, and as such, give you some kind of idea what what happens.

If you were asking why SPR, INT, and CON aren’t there then that is because they aren’t necessary for damage, but you can just leave out points if you want to factor them in.

I would also very much prefer you to download and rename this https://docs.google.com/spreadsheets/d/1nL5lDD2gm0ALfE9LIyFDpvpxp22m_7hXgmyWnC7PdYw/edit

The blue colored cells are where you are supposed to input your own data with.

The thing about this spreadsheet… for the public editable one… it’s not very reliable for doing your own character stats since people can change it.

I can’t believe I did not add this into this thread, but I did so with reddit…

But, I don’t get what you mean by this question.

Oh alright, I initially thought I needed to input my own values for str and dex as the boxes are blue but the sheet didnt allow me to… Alright, thanks alot for the help!

I don’t do pvp so I can’t help you, sorry. I’m also not going to make an opinion on something I have no knowledge on; in this case it’s pvp that I know nothing about.

Full STR is only really for min/maxing. The damage difference of a hybrid build isn’t as big yet.

I have decided to add evasion calculations into this spreadsheet.