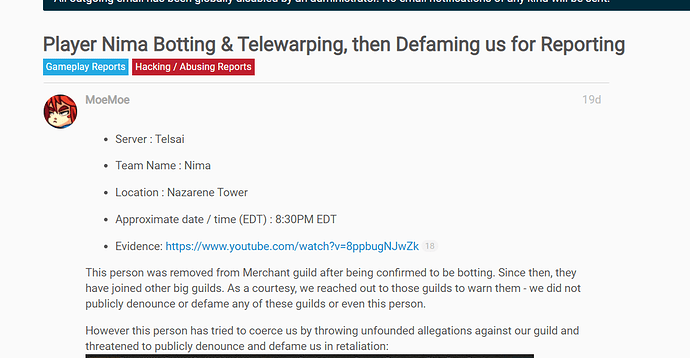 Sinfulken pops up minutes after with a new account, claiming he’s from GS.

Someone proves declares that there’s no one named Popzi in GrapeSoda.

I confirmed with a friend of mine who’s also from GS. IGN Temperantia. (Temp#5438 if you want to confirm his credibility) That there is no one Named Popzi in GS.

Soon after he got reported by Moe from Merchant Guild. He wrote a counter report on Moe.
Player MOE from Merchant guild BOTTING With a broken youtube link as “Evidence” 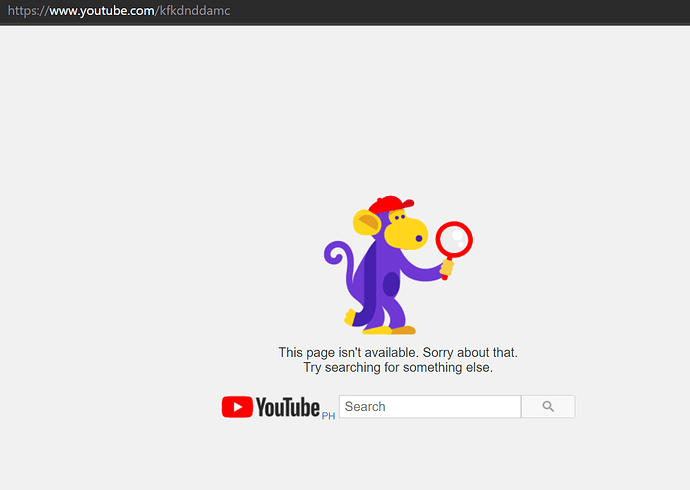 Nima then, gets reported again. This time from Pyffu. With a valid youtube video link showing Nima botting.

Yep that’s right. Sinfulken is back again with another counter report with a broken youtube link.

GM please just ban this guy from going back in the forums to stir controversies up with no evidence just so people will look away from the Nima character who is clearly botting.

Just found another account who is possibly sinfulken named Evange.

He uses the two accounts to push up the forum posts.

And everyone reading this, If you guys want to make a bot report on someone or on a guild. Submit valid evidence not broken youtube links.

Just an update on this~ **Sinfulken, bogoshipdasojunghae, and Evange ** Have stepped up their game and now attaches real youtube links but with False videos or Videos that are contrary to what he posted.

Stop using GS acronym, you just making it complicated. GrapeSoda is old guild while that person is from GrapesSoda, of course your friend can’t check.

GrapesSoda is an alt guild for some of GrapeSoda’s alts according to my sources. But it’s no longer in use. and Here in tels. The moment you mention GS it’s already goes straight to GrapeSoda

BUT, For the instance that I AM WRONG. I’m willing to correct my post if Sinfulken does reply to this and states that the GS he’s referring to is not Grapesoda or any guilds associated with GS.

BUT, that still doesn’t hinder the fact that he’s posting and spamming BOT Reports with no valid evidences whenever a person reports Nima for botting.

GM please look into their accounts and the botting Merchant guild, They are creating fake reports with the intention to hide their botting activities. I hope you look into the botters and take SWIFT action, GOD BLESS -Popzi

What defending? I’m a Grapesoda. You adding GS in title unnecessarily, just make it simple and clear.

Okie. I’ll adjust the title~ Thanks for the input then~

Now he counter reporting with yet another invalid link.

to be honest i have been laughing so hard at this

it is hilarious in many ways

but yea the sifuku guy and his alt account are probally spitting out nonsenses, or maybe he was trolling

also please mention @GM_Francis @STAFF_Yuri and our gentleman @STAFF_Bob too, this guy should be taken care of

Ye. I have to thank him for making this long ass maintenance interesting in a way. But ye. He needs to get banned.
I wouldnt have voiced out if he had concrete proof of people botting. But submitting broken YT links and making an alt account to reply to his own posts whenever Nima gets reported… was just plain as toxic.

not gonna lie i enjoyed this drama alot

Bumping this up again till you notice me @GM_Francis coz now he made a very cute forum account as tribute to my cuteness.