So will most probably try Arbalest with Sapper - Wugu, thinking of merging this thread with another thread…

I have seen a video of a player playing Quarrel Shooter + Arbalester and I really liked it. Actually I’m going Hunter + QS + Arbaletster. Since most things will be done with a party I picked the classes I like the most <3

Yeah true, since the new cm maps seems to be really hard having utility to contribute in a party is nice… Why not falco hunter though for perma stun?

I don’t have spare slots to equip a falcon, and I already had a spotted pig as a pet. So … I ended up like this. But I love falco! It’s a really good useful class both for solo content as to help a party with the buffs. And to be honest I have little knowledge about archers in general

I’m used to Wizard and Cleric builds, but now I started adventuring more in the Bows/Cannons/Crossbows world

But yeah, QS may not be too popular since it is supposed to be a defensive archer class bit kinda meh. I think i read somewhere a slot is coming free on a next event. Maybe try hunter falco with it?

you will always be sought in pt, given the new maps’ mobs can be perma cc’d

@adrian.agulto.rn yes I will think about it in the near future
@myself YEAH I SIMPLY LOVE THAT! and man I’m so in love because I’m making my spotted pig useful at the moment! Who would say that hunter would be one of my favourite classes? LOL … And btw I’m doing some CMs with my brother (he is playing with a cannoneer - matross) and we are running until level 5 using almost no items! LOL. I know that it isn’t much but we are 220. ^^

i am interested with your hunter review. what is the bad points of hunter? some say AI unresponsive, other say too quick to die

@NotVau maybe you can share your hunter experience too

What is the best ichor for dagger? Is legva instead of Varna ok for the dagger? I hear that wastrel dagger for arbalester is best? and what about armor set ichors? skia armor ichors? and ataka/sauk/smugis? and cards? theres so little info about the class

But i strongly feel everything will chance come ep12

Been focusing on my main instead of my alt arbalest, how are you guys liking it?

What spec are you guys going and skills?

im not even sure what skill builds are there because this is such an unpopular class… apparently theres an art to make dark judgement AOE but I have no idea how. i unlocked a mystic tome skill for it but it doesnt mention anything AOE related.

From what I’ve seen, the Art makes Dark Judgement give the Mark debuff to multiple targets in a AoE when it hits something. But no way to make it deal dmg in an AoE.

Skill builds I’ve seen and tested to be better are ones such as this.

Untitled694×211 63.9 KB
The rest of the points are usually spent in Fanwise and Escape.

Guided Shot: There is only 2 reason to use this skill. One is for the 20 second debuff, instead of using Dark Judgements 10 second debuff (Art Attribute). The second reason is the Vaivora Crossbow effect. 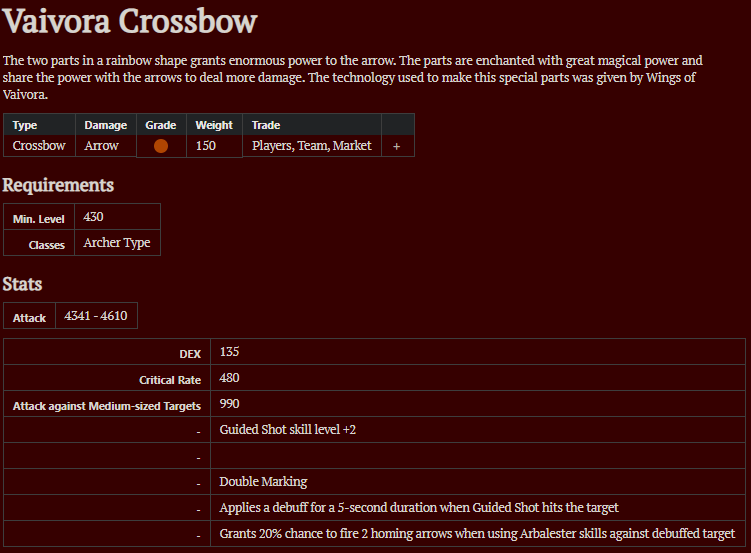 Dark Judgement: This skill is mainly used for AoE marking enemies with the Art Attribute.

Some things I found out:

The “Mark” Debuff, no matter the source that gave the debuff, is the same as the one given by Guided Shot.

“Normal” Homing Arrows has an SFR of 500%. Similar to the Homing Arrow SFR on Dark Judgement.

Things I need to test:

Whether are not the Vaivora Crossbows effect works without the crossbow being equipped. Meaning, does it put on a debuff or buff, that allows you still get its effect, allowing for it to still function even after switching weapons.

you can contact Psz from telsiai for help testing that part, he already got vaivora crossbow

what is stronger dagger with 20% bonus attack or shield with 25% chance trigger homing arrow ?

anyone have any other ideas on what to mix with my build?

planning on changing ranger to other class

i picked ranger for the steady aim, i was thinking of choosing QS for the block and shot, but im mostly using xbow and dagger

and im kinda confused with block and shot, is the 50% damage passive? or only active when i blocked with shield?

if u block an attack u will get a buff (+50% dmg)
the buff won’t end untill u attack an enemy , with skill or AA

YouTube This is testing I did on Block and Shoot about a year ago that seems to hold up. You get a second buff upon blocking that lasts indefinitely. Once you attack, you have ~6 seconds of damage buff to use.

I recently came back and put QS in my arbalest build but didn’t like it. It might be better with the weapons that buff some QS skills.

As for replacing Ranger, I assume no character slot for a falcon also means no char slot for any pet, otherwise I would say Hunter. Wugu-Hunter-Arba is what I used for most of my time back. You may consider Wugu-Piper-Arba if what I’m reading about the dmg songs working with poisons is still correct.

I play Falconer-Hunter-Arba now and I think that’s where I’m going to leave it for the time being.