the et video i posted above, I actually only had 583 crit rate there not counting quicken(forgot to check lol)

if those amounts of yellow numbers satisfy you, you should be good

you will be farming et a lot anyway specially floor 5 for the 2 part combo, unless you plan on buying it instead

Yeah, i’ll try mix the green/yellows in my vienie TB for now, i dun have 2 or 4 pieces lolo yet, i’m trying to put mine Vienie TB +10 with 3 lvl 7 gems and some transcend to skip gale and farm sarkmis, i’ll have help to farm it.

Good to hear that.

Sarkmis is a pain though. Good luck on that.

the skip function for lolo save wonders. ( a party of 5 can skip the level 5 times when clear)

Yea, 80 then times if you want to reroll LEL. (200k per reroll should be cheap to save the time)

Unless you plan to finish the set.

Yeah I do 10f runs from time to time

yes, they kick you for not being an ele on 5f et

Thanks @unicorntheshiny, Lostac, can u link me the et video? can’t find in the thread. @Lostac

cyclone attribute is only at 70 atm, planning to make it 90 later

What! these day there are still this issue?

Yes, I remembered their names.

You can mix since this is just a temporary weapon until you get your 315 orange and maybe a stats reset. We can also expect a str rework soon so nothing to be worried.

But since you went with 50 base str, you could mix in a Lv 6 green gem to help a bit. STR is not useless:

50 points = 115 STR after the R8 bonus, which translates into 149 ATTACK from the swordsman x1,3 bonus AND 115 critical attack (165 since he’s a highlander).
So if I’m not mistaken this is 223 attack + 165 critical attack when a crit occurs = 388 damage before reductions attributes and etc, not even considering dov or moles (that boosts your extra p.atk).

388 attack. So what if we one green gem into this instead of 3 yellows?

HL attribute really favors yellow on almost any scenario but this can make up for your critical rate for now I think and the damage loss is not that impressive for a temporary weapon. I know that 50 invested dex turns out to be 75 critical rate in the end (the more you have, higher the bonus…) but I think it can work. Unlike fencers, when DoV is up, you still deal good damage even when you don’t crit.

Calling @Lostac and @Kascly to check my numbers since I might be missing something.

also, are you barb3 or hl3 variant?

Moulinet is something to consider with free crit chance, you can easily do 30k+ per hit with it now including modifiers

Thanks for joining me haha <3

I just woke up and maths are being thrown!

I’m more curious about the new seism if anything, here’s the pic again

it’s a real 3-multi hit now, @Batman found it out 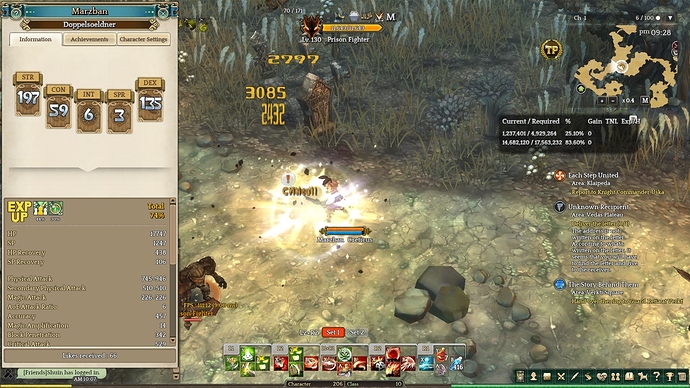 i had my breadfast just chillin

I didn’t reset yet, i’m in doubt if i’ll choose high3 or barb3, i like more high3, but idk which’s better to solmiki, warcry+frenzy with high transcend is legit haha, but moulinet+skyliner+cartar+armorbreak is awesome.

I think you would want a corsair 3 instead because of the innate pillage?

Regarding Seism, tried Seism with rapiers a few days ago, didn’t noticed the new 3 hits being true hits, this changes everything lol. Remember that new change to feral + seism (5 hits…) it makes more sense now.

Barb starting to look real good now. And if they rework giant swing to be a real aoe skill…