Ive also put in some work to figure out overkill, the formula seems to work as such:

if the killing blow minus the monster’s remaining hp exceeds the
monsters maximum hp by a certain % you trigger overkill up to 255%.

my overkill %s might be slightly off how the game says it but thats
the basic function. when you over kill you get a exp multiplier.

The exp is increased by the overkill %. To clarify that is BONUS exp,
you still get normal exp. So for 255% overkill you get 355% exp.

Thanks to WatchGintama for max overkill % and exp rate.

EDIT sometimes it seems to not trigger but I can not tell why, it seems rare and inconsistent…

2 Likes
Classes with Overkilling Potential
So, About These Blue Mobs
Cleave does more damage then Helm Chopper?
Motion August 10, 2015, 10:24am #2

Thus we get 1 + 40 - 81 (can be multi hit) = 40 / 4000 = 100% overkill But in the programming it seems that overkill only counts when over 100%
and you 40 HP while u hit 80 HP is not an overkill in the formula, this is most likely to prevent high level people to level on mobs 10 levels below their level and still get better exp than other people because of the sheer amount of overkill exp.
I personally never had an overkill of 100% but did get 103% etc.

Exp increase from overkill is indeed 355% of total exp and also works on some? blue monsters.

Getting a mobs HP low and then finishing it off with a strong attack is the way to go in any case.

When you saw a blue mob in this CBT, you would do your best to 1-hit it so that other people couldn’t snatch it away (since there were usually a lot of people around), but in the actual game it will probably be smarter to get every blue mob you find low first and then using a finisher move to maximize the ridiculous exp amount even further.

Wow!! I hate math… So I am glad someone else sorted this out lol Thanks for taking the time to share!!!

So… who got the 10000 overkill achievement besides barbarians here?

No need to be barbarian, just spam skills on Kepas.

You must be a necormancer xD!

And you must be a squire.

But dont necro threads from the death ^^. 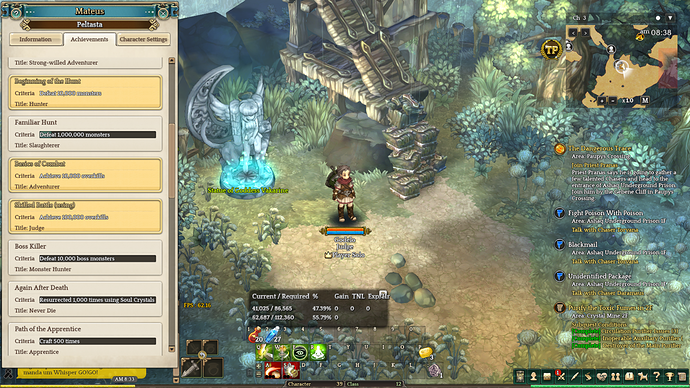 I got the NV 39, several hours killing raflower

How to easily farm Overkills: Don’t start leveling yet. Stay at lower levels and plan a genocide mission on those pesky little Kepas. lol.

I can not do anything for u friend.