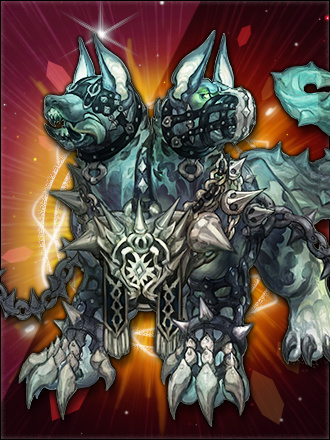 Misrus is a two-headed dog created by the powers of the Demon King. It viciously attacks anyone that approaches with its ceaseless Psychokinesis and Poison-property attacks. You can fight Misrus in the new Level 400 Hunting Ground, Outer Wall Sewers.

You can gather scrolls in Outer Wall Sewers by killing monsters and turning in supply slips at the devices near the entrance to Misrus’ Chamber. Using these in the fight will give you a buff to Attack, Defense, or a Shield. If you leave the sewers, these scrolls will disappear.

You can enter the fight at the Sewer Docks. You can use 2 Soul Crystals during the fight. 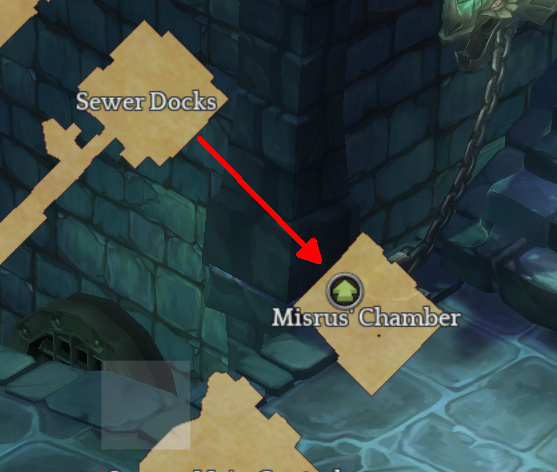 Rewards
You will receive one Legend cube upon defeating Misrus with a chance of a Mystic Tome Page.

You get bonus Soul Fragments if you complete optional objectives:

You have 20 minutes to defeat Misrus. After that, he will go on a rampage. This causes lightning bolts to appear on top of you wherever you are, killing you. He has 337 million HP on hard mode.

This is an early guide and was tested on Hard mode. Further explanations will be provided as time goes on. Please provide corrections or more information if you have it.

Expansion
Stacking buff over the course of the fight. Gains one stack every 60 seconds.

Phases
At certain HP intervals, Misrus will jump to the middle and say “I will show you hell on earth!!”. This signifies a phase change. When the phase changes, he gains access to new attacks while keeping his previous ones.

Attacks
Claw: Basic attack. Misrus claws a small area in front of him. 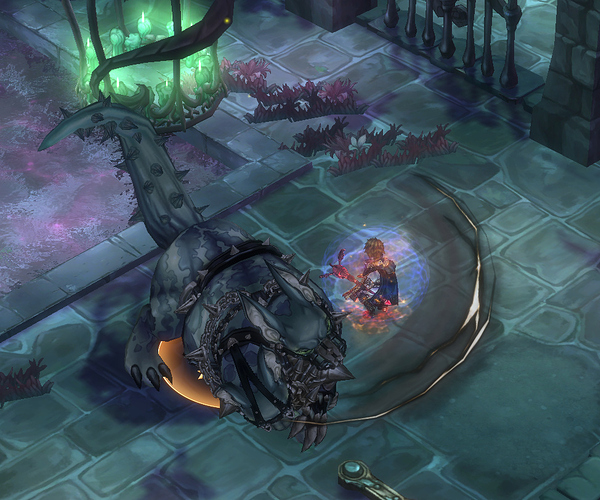 Slam: Misrus slams the ground in front of him with his paw. This deals damage, and creates a cross-shaped explosion that deals further damage afterward. 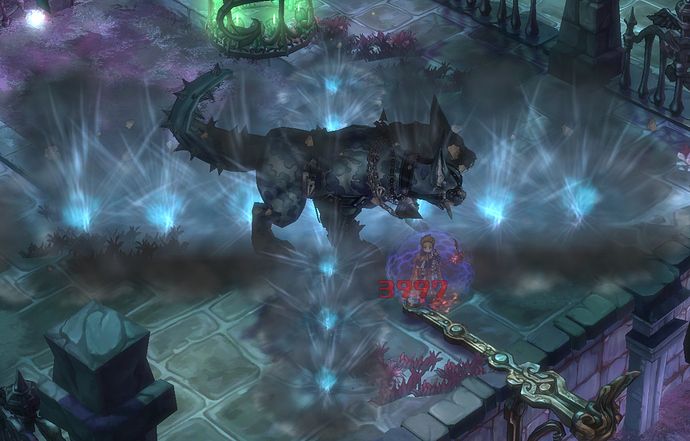 Triple Slam: Misrus slams the ground with his paw three times in a row. This has a large telegraph in a different size and shape every time he slams. 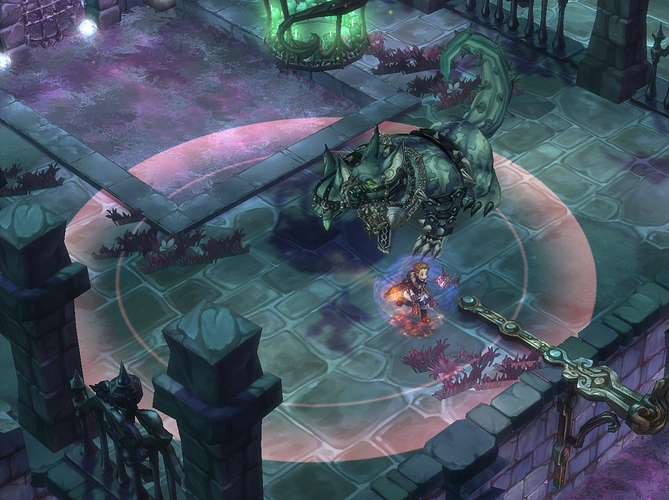 Charge: Misrus charges forward. Inflicts Stun if you are hit. Has an arrow telegraph and his eyes will flare red. 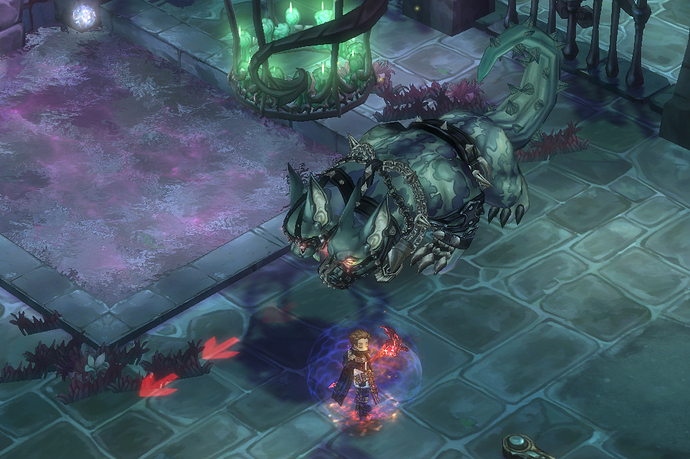 Tail Whip: Large telegraphed AoE. Can jump to dodge or move out of the way. 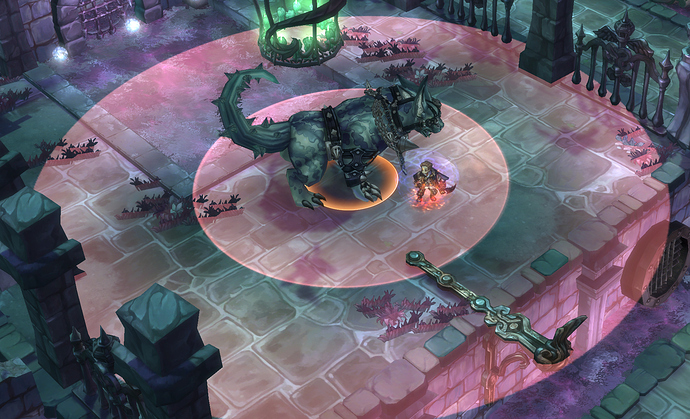 Acid Pentagram: Giant green pentagram on the floor. Slows and damages you while you stay inside it. Before appearing, is telegraphed with a large flashing red circle. Only one can be active at any time. 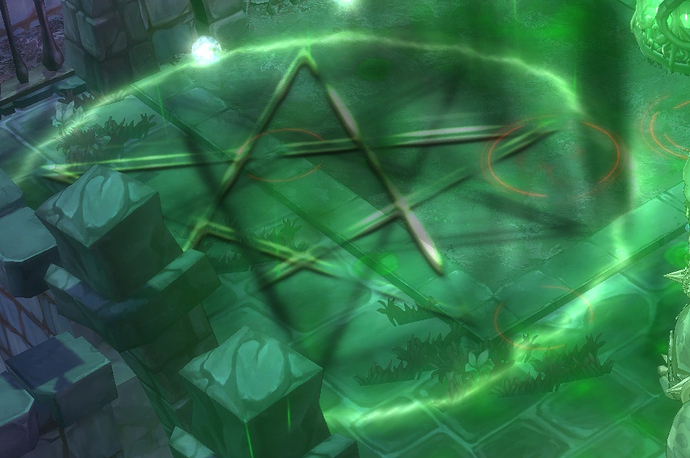 Acid Rain: Lowers defense over time in stacks. Also creates small cascading blood puddles on the floor that explode a second after appearing, dealing damage to you if you are on top of them. 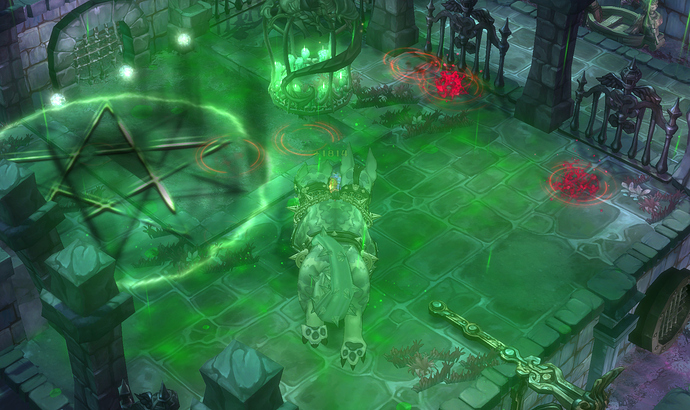 Player-tracking Psychokinesis: A red crystal that appears. If not broken within 20 seconds, a fast moving blue ball will appear that chases you down. Rapidly deals small damage to you if it is touching you. Crystal has about 600k HP.

Recovery Psychokinesis: A green crystal that appears. If not broken within 20 seconds, a fast moving blue ball will appear that flies toward Misrus. While the blue ball is on top of Misrus, he rapidly heals HP. Crystal has about 600k HP.

Blue Aura: Misrus will occasionally roar and put a blue aura around him. The lasts for about 15-30 seconds(?) and rapidly deals moderate damage and slows you if you stand in it. The aura is a donut, so you take no damage or slow if you’re standing right next to him or outside of it (only the blue ground hurts). 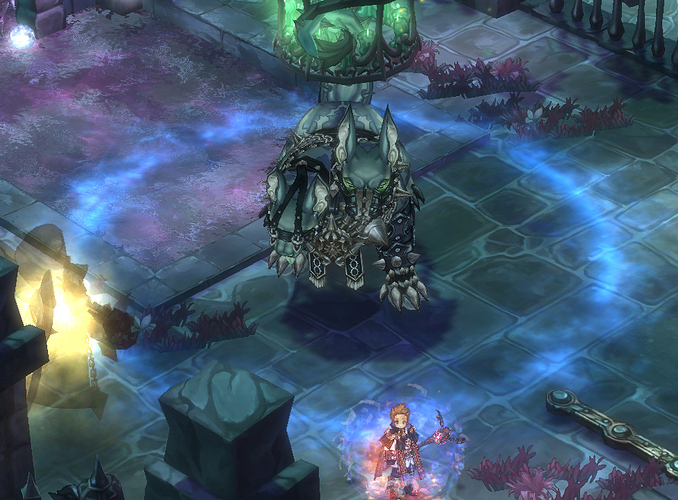 Yellow Gas: Misrus uses this after stunning you with his charge. He will do a unique roar and create a slow moving yellow gas cloud. This gas cloud deals heavy damage if you stand in it. 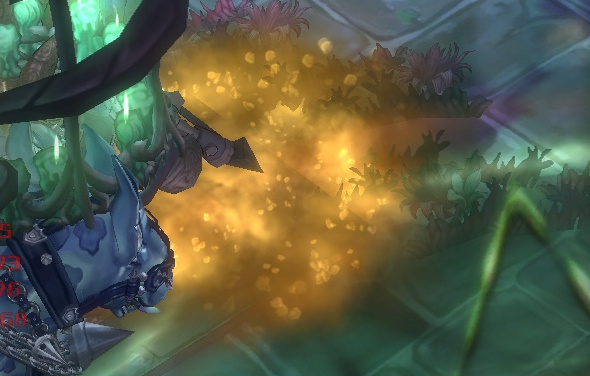 Special Attacks
I will show you hell on earth!!: Occurs at specific HP intervals and signifies a phase change. Occurs at 81%, 55%, 30%, and 5% HP. A chain will appear in a random spot in the arena, 3 different locations (southwest, northeast, southeast). You must touch it within 6 seconds or you will die. 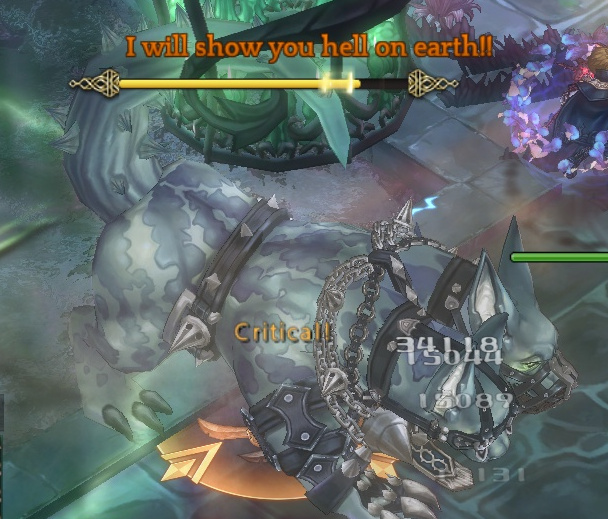 I will melt you away to nothing!!: Acid breath is spewed forward with a visible cast bar. Must get behind the boss or to the side. Heavy damage. 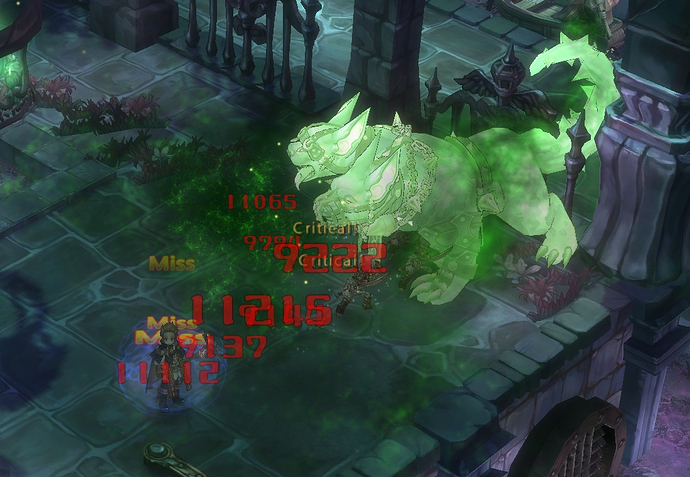 Psychokinesis Pentagram: A blue pentagram that looks similar to the green one. Misrus will begin summoning these in the corners of the room one by one when there are only 5 minutes left on the fight. You must defeat Misrus before the entire room is covered.
[picture of blue pentagram here]

Any way to survive the Yellow gas attack? He uses it out of nowhere, and since I’m a melee-range wizard, it kills me before I can even react. So far all of my Misrus runs ended by that gas cloud

Also, cant levitate over it…

Any way to survive the Yellow gas attack?

Every time I’ve seen him use it, he makes a distinct roar noise and animation. The gas also seems to hold still for a second before it starts moving, so I move away from him when I know he’s using it. Then it’s just a matter of kiting Misrus somewhere else and fighting him away from the gas.

As a fencer/matador/barbarian, i can’t find a way to deal with it so far (and i guess i won’t have any use for my fencer art here - attacking him in front is akin to suicide).

Any way to survive the Yellow gas attack?

The floating/moving yellow gas can be avoided if you do not get hit by his stun/charge attack. I noticed that he does this after getting hit by that spell. Hope this helps

The floating/moving yellow gas can be avoided if you do not get hit by his stun/charge attack. I noticed that he does this after getting hit by that spell. Hope this helps

I noticed this as well, and if you do get stunned and he starts making one, you have to get away ASAP, but my recommendation would be to get familiar with the startup animation of the charge itself, which shows up waaaaay before the red arrow on the ground does, and what he does with his head/front is unique when about to charge.

Yellow Gas and the phase change mechanic are really the only things that you can die to, provided reasonable gear.

The large pentagram is telegraphed, and his green and blue howls are more obnoxious than threatening. One thing to note is that he spawns the two colored crystals at the same time, and I would recommend prioritizing the red one over the green one if you can’t kill both in time.

Acid breath hurts but is announced and easy to dodge as long as you are close to the boss. Id say the best thing to learn is how to stay close and personal to misrus without taking much damage, and only run away from him to deal with yellow gas, crystals, and phase change wipe mechanic.

i don’t understand something… At the end, Misrus is so hard because two large pentagram (blue 15k damage) come on the field when the boss have like 10%

how to deal with this? I saw many videos and no ones have this situation.

I learned that he only becomes to summon blue pentagrams once there are 5 minutes left. He does it as a sort of “soft enrage” mechanic, slowly covering the room with them until there’s no space left.

You’ll need to defeat the boss faster if you want to avoid dealing with these.

I dont see any discussions about the misrus and moringponia set effects. Some insights would be nice. Wanna know if they are worth over the old set effects

Not many people have the effects yet. I’m soon to get the Skidas effect.

i saw that today… Now i can kill him more faster and skip this mechanic.

I’ve done it a couple times with fencer in the end, at normal. Two things in particular.
1)The Charge hitbox is, frankly speaking, utter bullshit. I’ve been hit even when i was at the sides and behind.
2)As a melee character, how am i even supposed to hit those crystals if they spawn in the middle of a green pentagram? At least make them spawn in areas not covered by that…
I’m working at another character in the meantime, cause for my main, this boss is just nonsensical.

2)As a melee character, how am i even supposed to hit those crystals if they spawn in the middle of a green pentagram? At least make them spawn in areas not covered by that…

Possible to dive in if you have to temporarily, or just make use of some sort of ranged skill if you do have one… the crystals have low DEF/HP.

Ultimately, it’s not so bad if you get the red crystal to go off, but if your damage is lacking, you really need to take care of the green one either way. It heals around 3% of his max HP which can be harmful for kill time.

Gotta hope it doesn’t decide to charge you while there and slowed down, though - due to the janky hitbox mentioned above. I usually keep the Corrida for that purpose, even if sometimes it doesn’t reach far enough.
In the end, anyway, i decided to play extra-safe and i just run far away when i see it charging. I spend more time doing so and i won’t get the 5 minute kill, but at least i get the rest of the fragments (i’m doing it in normal mode so far, maybe next week i’ll try the hard mode…).

What kind of gear do I need to do misrus.

It is doable with +6 T5 Legendary Armor and a +11 t8-10 legend weapon. Easiest way to do this is to get Savinose gear which is legendary tier and easy to farm.

The better your enchants, ichors, gems, attributes are, the easier time you will have.

Getting buffs from friends such as food buffs, magic shield, etc, help a ton.

From there it’s just learning the fight.

I have to add that, for whatever reason, the hard mode misrus actually got far less hp and an higher physical defense (but not magical). The other difference is in the halved amount of stats you will get via the colored scrolls you can get before the fight. Anyway, if you’re using a magic-based class, you’ll have an easier time with the “hard” mode

It would be nice to watch a video of misrus with average gear. The only videos i can find are from overgeared whales tanking everything and spamming. No strategy needed

but still the focus is on how he cleared the gimmicks, and avoiding the acid rain etc. No matter how geared you are, you can still die from the acid stacks, since they shred a lot of defenses.

I think ludo gave a very good walk-through for the entire raid, as well as the mechanics involved. Slowly but surely, and with enough practice. Are you looking for any specific class walk through with average gear? I can try my luck in helping you dig for one