I can’t draw, so i’ve made a few digital models.

Important note - The modelling software (if you can call it that), is a basic browser-based CAD program by AutoDesk (Maya, AutoCAD) called TinkerCAD. https://www.tinkercad.com/

All shadings used were from the basic plain colors available.

Note to Staff: My design was not created in Photoshop, so I do not have a PSD file. I have linked a 3d viewable model of the design below. I can also provide write-access to the project through a shareable link, if required - please PM me for the link, as it is timed. The project can also be copied if you have an AutoDesk account. 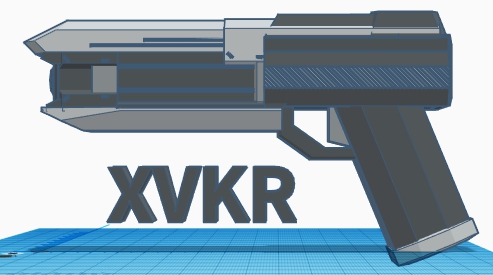 Tooltip:
Created by a long forgotten artificer, this weapon is rumored to contain a shard of Giltine’s power.

Weapon design basis:
“Keep in mind that it needs to be feasible enough to work as an actual weapon in-game.”

I went to review all of the current in-game pistol designs (I used tos.neet’s model viewer, sadly the site is down) and found that, currently, most of the pistols present follow a single-shot/revolver design, and use a single cylinder polygon for the barrel, while details are textured on.

I wanted one with a more modern semi-automatic (https://en.wikipedia.org/wiki/Semi-automatic_pistol) look, and went with that core idea for my pistol, and combined it with a futuristic touch. I’ve also tried to keep the model as simple as possible, and most of the design’s details should be able to be replaced with texturing.

With that said, the following are some little things I’ve found out model-wise while messing with this project:

Special effects:
I’ve noticed that there are some effects that could potentially be re-used in a player capacity. One of which was Giltine’s teleportation aura/cloud. I also figured that the pistol itself could be given an anvil effect that’s different from the normal model glow, as some of the new halloween items uses an orange lighting effect instead of a texture glow.

Thus, following the grey/dark design for the pistol, I figure that the Blossoms or Giltine’s Wings feather effect can be modified with recoloring & texture changes into a ash/shadow effect, while there could potentially be a secondary effect (Dark aura) that only appears on certain skills, e.g. Bloody Overdrive.

that would be nice owO

you did a good job!
TinkerCAD is great for really quick stuff.
Everytime I do something in tinkercad, I keep thinking I should sit down and fully learn fusion 360.
cad programs: 18 Best 2D & 3D CAD Software for Technical Drawing: Free, Paid and Online | XPPen