Tree of Savior Feedback, round 2

After an unintended break, I’ve managed to be able to play this game a bit on my brother’s pc, when he wasn’t using it.

So far, I kind of liked a number of changes in the game, but It’s still not good enough, and I’ll say why.

So… You guys fixed the problem where the game eventually would end up giving you quests forcing the player to grind, by increasing the exp acquired through leveling and quests. The good side of it is that now the player can follow the maps to level up their characters, without the problem of having to stop to grind. The problem, the player ends up overleveled, and as you get more and more overleveled, the game ends up not being challenging, so the only thing you have to do in the game is a mindless questing, since even the bosses can end up dying to ONE skill depending on the class you’re playing with.

That is a issue you guys will have to address, because that is a major turn off to the game, since the game offers no challenge, but offers you a repetitive chore with minor variation, It ends up gradually boring, and I’m not fan of that logic of “You have to keep playing the game until It gets to the fun part”, the game should be fun since the point you begin playing it, so even the first field your character begins with should be a challenge.

Replaying the game several times can be degrading on the experience too, even more if you repeat the same paths over and over, that’s why I want to ask you guys to reimplement the possibility of starting in Orsha. The game is pretty much singleplayer on the beggining, so there is not the worry of dividing the player base, even more since at about level 100, the players from both starting zones will cross paths. And in case the player has a friend who started on the other region, that would be easily fixed If the teleportation statue to Orsha and Klaipeda were unlocked since you create the character, so the player wouldn’t need to do quests/grind until acquires the silvers to buy the teleport scroll.

I loved the change on the classes, now I can begin making my dream character right from the first class changes, and that also increased the diversity of players and classes in the game. The problem is that the classes are not very balanced. To begin with, the game turns into a “Tree of Spelling” as soon as you get the first class, because gradually the basic attack gets weaker and weaker as the level of your character increases, to the point that If a level 60 player tries to go melee against a level 60 monster, It will have to keep whacking the monster about 10 times to be able to finally kill it. The skills, they make it ridiculously easy for the player to kill the monsters, since will kill them a lot faster than the normal attack does. Of course, depending on the class, that wont be a problem, since most likelly will have a skill or two to boost normal attack dps. I think there should be a better valorization of the basic attacks in the game, even more since there are people (like me) who aren’t fan of spamming spells and then running around like an idiot waiting for the skills cooldown to refresh, and possibly nerf the skills damages, to be more complementary, depending on the skills, but still make it worth it to use.
The only actual fix for the melee issue would be refining the weapon and buying pardoner buffs to increase damage. But that’s just stupid, I mean, level 60, seriously.

The cleric class is disappointing, I do partially like the changes to Cure and Heal, but that also reduced the dps you can inflict on the monsters. You start out with a very melee weak character, until you are able to buy an attribute that costs 1 Attribute Point, meaning you have to be able to enter Klaipeda and do a quest to a class npc in the town to be able to get points to spend. The only attack inflicting damage the cleric has is Smite, a melee attack, but the cleric begins the game with the status valorizing the magic build, so Smite only helps a bit to deal damage, but eventually you’ll have to make use of basic attacks to kill the monsters. That turns very tedious.

The new class change system has It’s ups and downs. The upside, is that I can pick almost any class as soon as the advancement is disponible (with the exception of the classes that requires second advancement). That also increases the class diversity in the game, which is always good. The downside, is that looks like I would need to play the game for weeks/months, doing all the activities that gives points daily, to be able to change my character class to another one. Do I need to continue?

The dungeons, I didn’t even really tried them, because everytime I tried to queue on the level 50 dungeon, I was alone in the lobby for several minutes. That wouldn’t be a problem If I didn’t had to stay in the town waiting for the dungeon to start. If I could enter the lobby while I’m playing the game, let’s say, doing quests in the maps, that would be a less boring way of waiting for the dungeon to start.

I’m not sure if right now I can end up returning to the game, but the way the game is right now is boring, the only challenge I had was in Topes Fortress, other than that, It’s not really a good game to play and enjoy, and I’m not interessed into progressing further in the game to reach the “fun part”.

There’s also a little extra, the quest log is bonkers. It keeps popping up quests from both Klaipeda and Orsha when levels up, causing a confusion when tracking quests. Also summing to the fact that after a number of levels, It starts popping up quests from fields where the monsters are way more higher leveled than you, like 20~30 levels above than your character is, meaning that trying to do quests there is a death penalty.
Would be awesome If you guys fixed that particular issue.

Ah, and just a little extra. Please make different icons for Refining and Repairing player stores, It’s hard to find out which store repairs equipments, or refines them to make them stronger.

The game is pretty much singleplayer on the beggining, so there is not the worry of dividing the player base, even more since at about level 100

The problem, the player ends up overleveled, and as you get more and more overleveled

There’s a combination of factors in play here.
• Players level too fast on early game to even form a party
• The game isn’t advertised (and has low retention power) to get new players
• Current direction is completely focused on the endgame, making new players level fast a top priority
• Excessive amount of low level maps for the leveling speed
• Combat is too simple and easy to have any benefit from partying outside challenge modes, even then it can be overcome with heavy equipment investment
• Little to no level on lower level maps, reducing the chance of veteran to newcomer interaction outside towns

I’m not fan of that logic of “You have to keep playing the game until It gets to the fun part”, the game should be fun since the point you begin playing it, so even the first field your character begins with should be a challenge.

The only case in which i see this quote as reasonable is if you have something that is already good and then something that is way better behind the wall. Personally speaking, i don’t see neither in ToS, you just need to do a lot of boring grind so you can become a god and make the game more boring (as you’re reducing the only difficulty available). Sure, it’s super fun to obliterate all enemies with a single skill and see Overkill popping on every single monster, but that gets old after a couple of minutes.

If you want to get another (deeper perhaps?) look at the scaling issue, i wrote a thread pointing some critical issues with the combat design. For some reason it was flagged and hidden from public eye.

The problem with those factors, is that the early game is uninteresting. When I remade my character a third time, I was already sick of Klaipeda, so I went to Orsha to try leveling up there.

The game enforcing that you need to level up fast without providing the fun of playing the game, is like as if you were watching the world pass by, while you are sitting on the bench of the bus, on your trip to your destination. The only joy is the sightseeing, nothing else.

If the purpose of the game was to make people reach the end game fast, would be better if they make all character spawn at the max level, and allow you to pick the classes right away, then give an average equipment to the player, but that will generate another problem, since It will kill about 95% of the game.

I’ve also tried to check your post, but the text is so faded that was starting to hurt my eyes, so I had to skip parts of it. But my guess is that whatever flagged it, was because of the first 3 paragraphs.

Edit:. Nevermind, I found out that people can abuse the report system to take threads off air.

Players are getting bored and tired of repetitive “gameplay” (this isba fact, just look at the decreasing playerbase). ToS only offers cute graphics, but no challenge really. Imbalance pvp, pve is an eternal grind, and leveling is easy.

The boat is sinking for this game… Will gwt an influx of players when a patch comes out every few other months. If nothing is wrong, then why don’t the players stay? Coz they got no reason or can’t find one

I loved this game for years. But recently I am starting to see the light at the end of the tunnel - that is to be free of this game

just doing salus and cm alone kind of takes 2-3 hours of the rest of my day’s time, thanks to the new guildhangout customization. maybe it’s time for me to stop grinding and enjoy the fruits of my labor with guildies and friends Owo 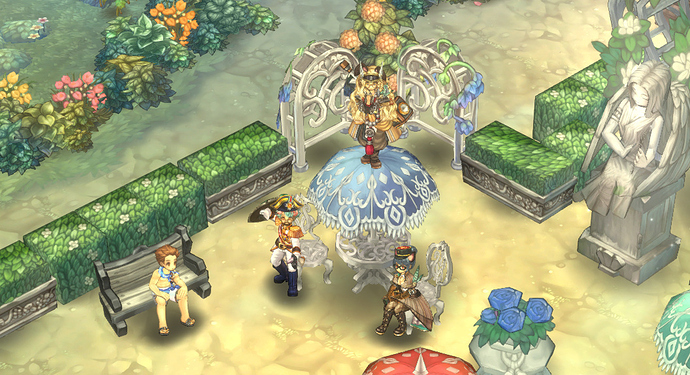 btw, since misrus update i find this game is tailored more and more to +16 weapon player (the misrus time trial, the hp of normal mob at episode 12), which is becoming less and less interesting for casual player like me. I will stay with savinose, it help me skip the burden of meticulously reidentify lv 430 random ichor using 2 new magnifier