At the end of 2020 my friends and I got together to make the ToS Awards happen again. Along with some players from our server, [SA] Silute, we chose the best classes of the year. Among them are the most used, the best for PvP and PvE, the best Vaivoras, best arts and classes that were not so good as well. 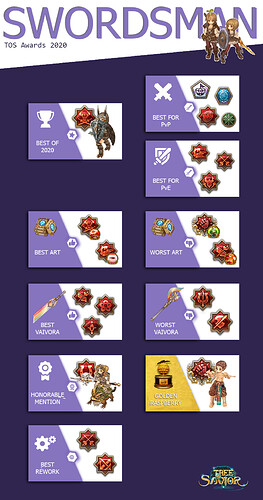 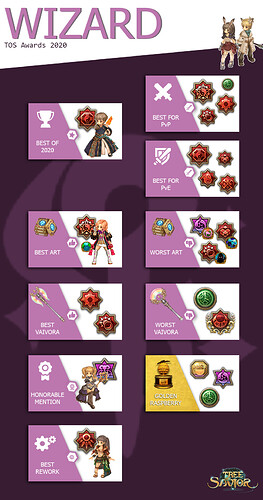 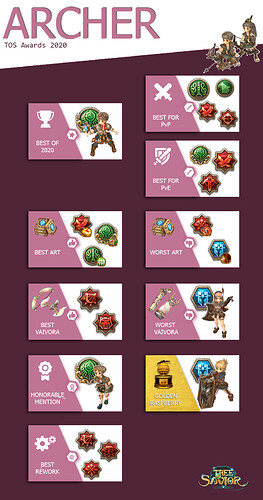 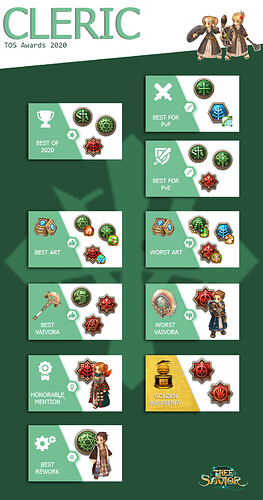 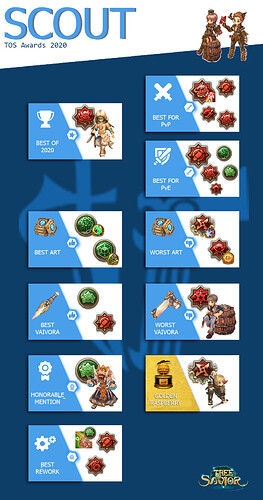 Nice! I agree with most of these.

The one category I disagree the most is ‘worst wizard arts’. My top 3 worst are:
1 - Rune Caster Cloth Mastery: Losing 100% dmg to gain 10% dmg, nice game design. I’ve yet to meet any player that uses this art with lvl440 gear.
2+3 - Alchemist HP and SP elixir crafting: Costs shards to craft. But the worst part is that these arts are completely outclassed by the afk Popo shop lol

But awesome stuffs/layout by the way! Please make one for 2021 as well!

now about the thread.
swords:
i really liked the cata as honorable mention Plus dragon as best pve with fencer and doppel? maybe you guy’s are aiming for each main type of weapon class because we can barely see dragons going around :(, without doubt dragon got a lot buffs lately but well, is not on the same level as the other two.
plus i missed sharp spear not being mentioned, hop may not be on par with the others chosen as pve but that buff is super strong since we can easily increase his up limit with zega spear+gem+attribute.

wizards:
taoist winning is not surprise.
Sage as red class? nice surprise, even more as best pve, is more wishful thinking i think but yeah hope that sage can shine again on 2021
Plus rune vaivora as worst? disagree with that, rune VV is super strong the only downside right now is that is rod and in the future imc more or less nerfed it by making rune of rock being lv 10 but this does not really represents the state of the VV this is why i disagree since is other factors that makes the VV not shine enough but still we have far worse vv laying around.

scout:
i do like raiton art, i do feel the increase in cd is sad but still, really nice maybe is just me, even more since shinobi gained the golden raspberry haha.
totally agree with corsair art’s, just because i’m tired of those gimmick things. 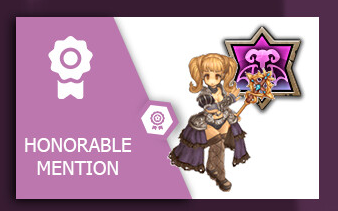 this art is pretty funny, the art have 3 stacks, like… do IMC really want us to have 3 suicide zealots on our party to stack the 30% damage buff?

2021 Sadhu will be great with the rework.

2021 Sadhu will be great with the rework.

Also sadhu is quite strong atm too ppl just hated the changes back then so much (especially possession) that barely anyone cared about it anymore. XD

The newest sadhu tho… idk… for me it looks quite boring and it lost its unique mechanic… I know it didnt work well but they should have still find a way to make that… out of body experience xD… work.

Nak and Pelt gonna slam that 2021 best rework. Also feel Peltasta art is a contender for worst art in swordsman. 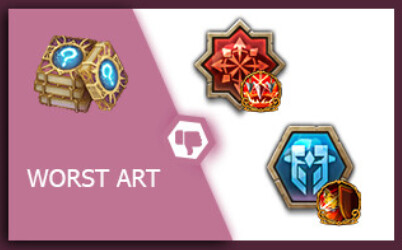