We have made an announcement regarding ‘Survey: Regarding Fan Art Festival’.

So you guy decided to use the voting system to fix the voting result?

Sorry , but I don’t think it is an effective solution.

So you guy decided to use the voting system to fix the voting result?

It asks for team name, one can only hope they actually bounce it against their database.

back then, as i remember it was purely staff picks.

it sounded kind of ok, though there has been issues such as questionable picks and cases of alleged favoritism

at one point, the community had enough of it that they complained about these issues. because they wanted some winners that represent the community, and not just the staff

and thus the voting thread was implemented. where half of the winners will be decided by the community

but regardless, there will always be a way that the artfest will have results unfavorable to the community, be it staff picks or via community votes.

i remember back then when the staff used to make commentaries too as to why they pick an entry, i kind of missed those, you get to know the staff. though it can also lead to the favoritism issue, as participants knew what style and ideas that are most likely going to win.

so with the voting thread implemented. people thought it would be a good thing. but it backfired such as the nature of popularity contests are.

to have fun and interaction with the artists within the tos community is the reason why i join artfests.

i find it that people who are a good sport are the real winners of any given competition.

as they know that a contest doesn’t dictate their worth.

because at the end of the day, we aren’t measured by our skills, but by our hearts.

if i can make people happy or appreciate my art, that is good enough for me Owob

i’m not sure if this is a good suggestion or not. but do you think implementing a rule to not have a participant to win consecutive artfests would help minimize both of these issues? staff favoritism and vote-begging?

i mean, maybe it’s just me. but people who won from the previous artfest can still join in for the fun of it. but with them being prevented to win would at least give other people a chance to win and make the artfest more enjoyable and fair for everyone. it is also easier to monitor in the case of alt accounts and change in artstyle, when compared to checking multiple accounts that are suspicious.

Time has past and people playing this game less than before so this is why someone only can win from voting OR maybe because this rule can’t do anything or they are just Bluffing, someone art already got 2 of this rules but still can win the contest so I think this voting probably not enough for solve this problem. 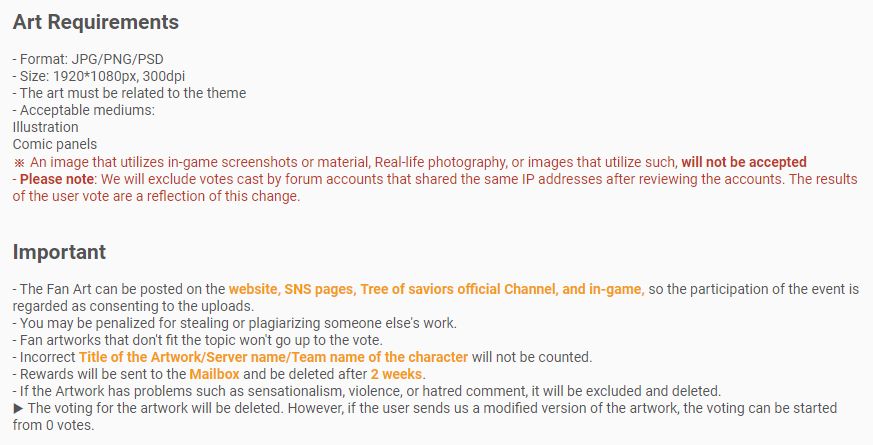 Fan Art LOTTERY, that solves it, bring the RNG here too. For real, that’s the only way to have a fair contest with such a small active player base. You are all wasting your time.

A set number of prizes per server would be cool too.

And bring back allowing in-game screenshots/material, I had some fun losing these contests and that rule basically kicked me out (I was the only one doing that too, you hate me, imc?).

best way is to leave it all to GM pick. Atleast they are not a member of a full 95member guild, they dont have alts to barrage votes, they are not some eGirL that will pm you in game/discord/even socmedia to beg for votes.
Even if they show favoritism for style/medium/context/content, it will be based on what they think what looks good - and 100% they wont pick some trash art.
Also other servers will get a chance to shine…not only the most populated telsiai

Bring the votes in game and 1 Team
Name can only vote once or twice, also show the list team names of the people who voted to specific art.

i used to suggest that too, though i feel it’s hard for the forum staff to coordinate these to the people handling in-game implementation

which is why i think having winners from the previous artfest have a time off on the next event would help regulate the selection of winning entries.

in the meantime, here are links that more or less shows the results of past artfests >w<

glacia looks like a human already if you’d think about it, so pretty much artist got idea how it looks, meanwhile others really came from monster turned into human haha but yea better gm pick all the 10 best works than just brainless voting

Hopefully it more fair next time

It would be fair for 7 winners by IMC picks ( with a detailed info on why they picked the entry and how it corresponds with the theme ) and 3 from player votes.