We have made an announcement regarding ‘Scheduled Maintenance for July 11-12, 2022’.

Hi, thank you for the update.
Can you give us the details about Oracle too? I believe it is important, because Healers changed a lot this patch. 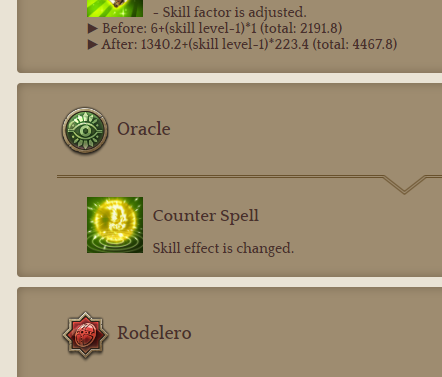 This is not enough detail.

If you think this include latest ktos big rework to oracle, diev, etc you are wrong. They don’t even mention kabba vv here so the oracle big rework will prob in the next 3 month

Somehow it’s kind of weird they left out Cleric Reorganization Pt. 2 as they already included that small KTos patch of Thunder Kick timer.

I hope the Cleric Reorganization Pt. 2 will be included in span of 1-2 weeks (not whole 2 months with big update coming in).

its not weird since 4lk already said it that its before cleric reorganization pt2
If you been here long enough you should know the drill already thats theres no way there will be skill update in next two months cause they always makes each patch age for 2-3 months then applying something new, messing up numbers, new raid, new gear etcs
So your best bet is just to deal with it and hiatus like many others rather than believe in some false hope

I checked Fedimian yesterday and that’s exactly 17 characters on the whole server able to satisfy this requirement. So I guess it’s solo mode/automatch until you get a belt to boost your gear score. Anyone knows how much you get from the belt?

Anyone knows how much you get from the belt?

When you look at gear score list, you have 20 or so characters from different people then the names repeat themselves. So yeah unfortunately for us Fedi players our playerbase is now just final core players. So many veterans left the past months

Automatch is fine anyway, you get 10 frags per run, which means a belt after two runs. The only issue I have is that considering the special nature of the raid (no healing) they should quickly fix the bug with solo mode (“restart from starting point” kicks you out of the raid instead of replacing you near starting NPC like in automatch) so that players dont lose a run by clicking the wrong option when they die.