We have made an announcement regarding ‘Scheduled Maintenance for January 10-11, 2022’.

I don’t want to fight her…

“Skill and Attribute of all characters will be reset.”

And about skill balance: a lot of skill synergies or buffing attributes have been removed, I don’t get this…

And doesn’t this patch simply kill Featherfoot (you lose 2 skills and everything else is basically a huge nerf)?

(on the other hand, my crusy’s gonna love the extra buffs…

“Fixed the issue that the Goddess’ Statue is installed near the Guild Tower during the GTW to block from seizing.”

At least it’s something, now time to fix the 99999999 other bugs and make mouse mode great again… 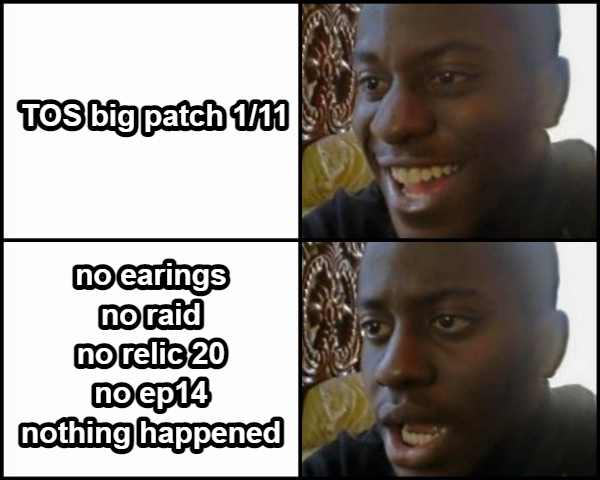 And doesn’t this patch simply kill Featherfoot (you lose 2 skills and everything else is basically a huge nerf)?

Losing Blood Bath and Kundela Slash is not a big deal, but losing the healing from Blood Curse is massive. The main draws of FF, for me at least, were the theme of the class and the hp regeneration skills. Now, one of those two is pretty much gone.

-Blood Curse consuming 5% to deal mediocre damage, and not giving any hp back sucks big time.
-With the Cursed Blood and Control attributes being deleted, Levitation was made utterly useless, and in fact, a detriment for some builds. There’s no point in flying anymore (in pve), and some skills can’t be used while levitating (most notably Kurdaitcha and Psychic Pressure). On top of that, if you choose to fly, 10s duration 60s cd sucks.
-Kurdaitcha also consuming 5% hp for a full cast is not good either. You have to stand inside the target’s hitbox, walking slowly (often taking unavoidable damage), and you get punished for it.
-The lack of regen is the biggest killer though. Now the only regen is 15% hp from a full cast of Blood Sucking. The problem is, by staying still for 5sec, there are times you take more than 15% of your hp in damage…
-As an additional kick to the nuts, the Increased Recovery attribute is being removed.
-Other problems include: Dps is simply too low on many skills, no Featherfoot Vaivora exists.

Now for the good parts:
-Kurdaitcha getting it’s cooldown increased is nice. Having to channel a skill for 5sec, with 12sec cooldown was very tiresome.
-Bone Pointing now deals decent damage. Might be worth using without the Bone Necklace art?
-Blood Sucking maximum channel time being reduced from 10s to 5s is a step in the right direction, I feel. Still not a comfy skill to use though.

It’s such a shame Imc insists that FF should be a channeling class with a high-risk low reward gameplay, instead of dealing instant damage with focus on all other non-channel skills - like it was before the Demon/Goddess sets were introduced.

I have been playing Featherfoot since rank8 released, but now it’s finally time to drop it. Each patch makes it less comfy to play. I just can’t anymore, man. Each new raid and content they introduce, feels like it’s specially made to counter Featherfoot.

To be honest, I have a hard time believing anyone at Imc tested this rework outside some dps spreadsheet.

For most other wizards though, this patch is pretty nice. Overall I like it, it just means I have to drop Featherfoot after so many years of playing it

Chill, imc willl later update ff with it’s vaivora, make it op,turn it into meta in kr,release ff package here in itos than we will see every leaderboard of wiz includes ff
This isn’t just about ff but probably many others since It’s like imc modus operandi now
Awesome

Hmm, did Attribute Points got a reset too? like can we extract it? O,O

Not mentioning that Kurdaitcha’s footprints now only hit once instead of proc-ing for the whole duration. Considering that the SFR on the skill is absurdly low, it’s now a completely useless skill…

However since all synergies are now gone, there’s no point using a build with the same element. Dark wizard theme is now gone, Warlock buffs only boost Warlock, Bokor buffs only boost Bokor and so on… so replacing FF with any other wizard class is easy.

Is it me or they also applied the SFR nerf patch? My Pyromancer SFRs have been reduced by like a factor of 8…