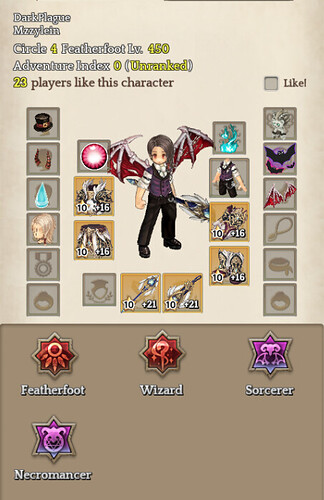 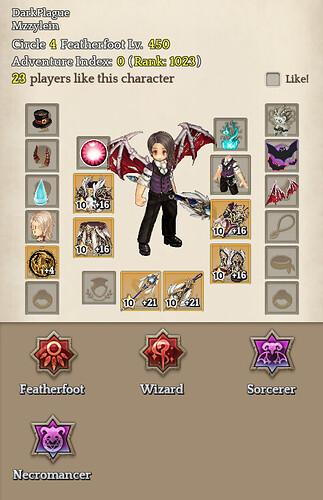 image473×731 105 KB
He now has +4 Seal equipped, probably something that the GMs left him over despite deleting his +5 Seal. But that just further confirms it.
His gear before the ban 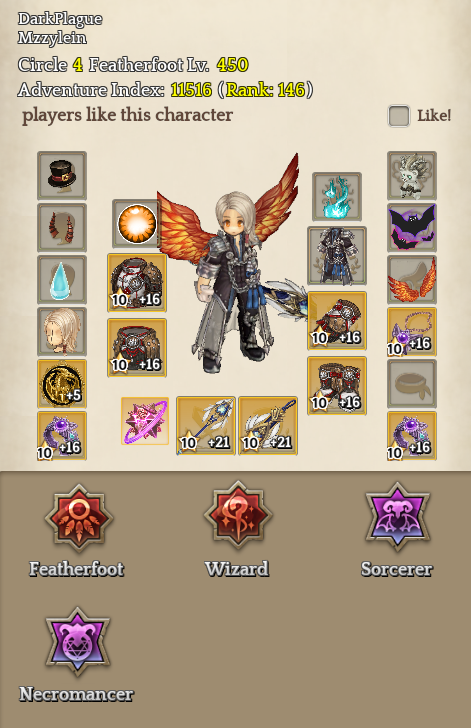 So to skip the stupid message , when i accepted darkplague into the guild i send a ticket to support and they told me me he was perfectly clean , what can i do about this , obviously he is NOT gonna stay inside the guild now but well he never participated in any guild content to even begin with. People are really looking for issue making me log into the forum just to state the obvious. And the only reason he stay for like 1H after admiting his issue was because people just wanted the story , be the next time you see him he will already be out.

TLDR : don’t start me on this because i got TON of picture of player abusing event like the 2017 pokemon event and stuff , from the earth tower gaia earth crystal spawning to the tbl/feud abuse , to xxxxx pokemon event abuse and co (i wonder were they are now after getting +100diamond anvil not timed) and muchmuch more. So yeah i saw him using leticia like 1.000 time so i assumed he was legit , still send a ticket to support before accepting him , support told me it was OK.

yeah he wasn’t legit, but be sure next time you see him is he outside the guild .
If there is one legit farmer here it’s me , so i won’t accept this ■■■■.

that’s it stop preaching the wrong because ur side isn’t clean either.

You mean support told you with a bot message that he is clean? Whatever, since he’s kicked now I will take back what I said. Good job

why moving the topics over “sides” or guilds when this thread has nothing to do with that to begin with?
who even wrote anything about his guild?

dont start a ■■■■ show over an rmter and dont deviate the thread, let all see what he is in all his glory.

still laughin at the guys saying he was legit and all his gear came from playing the market.
good jokes, 10/10.

simply because hibiki writted about it . he edit’d

let’s move on now , just don’t mix that and carpe. thanks

edit : that’s even a guild member of carpe who posted this(the thread) , to show how much we disliked it. 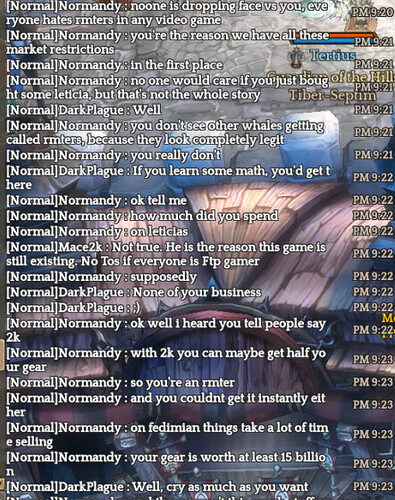 Nice proof finding it out after I plainly admitted to everyone. xDD

By the way, everyone knows Normandy RMTs as well. The guy got Full Luciferie in the 2nd week of Tel Harsha, without rolling Leticias. He and Albero probably just got angry because they couldn’t get what I did through RMT. Just your typical hypocrite…

Thing is I met a seller that, although, I suspected, I wasn’t certain he got hacked items. In the end, I found out that he managed to get any item through a guild storage exploit. He sold silver and items cheap. ChiroHisuke bought some items from him and, also, he borrowed a Boruta Card + 2 effect costumes from me, that he agreed he would pay me 150,00€ for it, the same amount I paid for them.

In the end, he just decided to scam me, blocking me from TOS and Discord, and trading the Boruta Card with SoaringArrow for Crimson Wings. Actually, he already planned that, since he came up with a lame excuse that his mother got arrested and he couldn’t pay in that time. ChiroHisuke is just a swindler that commited plain fraud through TOS, a real crime. RMTing isn’t a crime, it’s just against the TOS policy, but the swindler ChiroHisuke commited a crime through TOS.

It seems the seller bought the exploit from a hacker in Klaipeda and Telsiai that earned more than 20k USD selling stuff in those servers. And IMC only found out because the same hacker, due his schizophrenia, decided to tell everything to IMC. That’s what the seller I bought from told me.

hilarious attempt at deflecting rmtplague but i don’t know how you even keep coming to the conclusion that i dont spend money on this game, i literally admitted it even to you xD 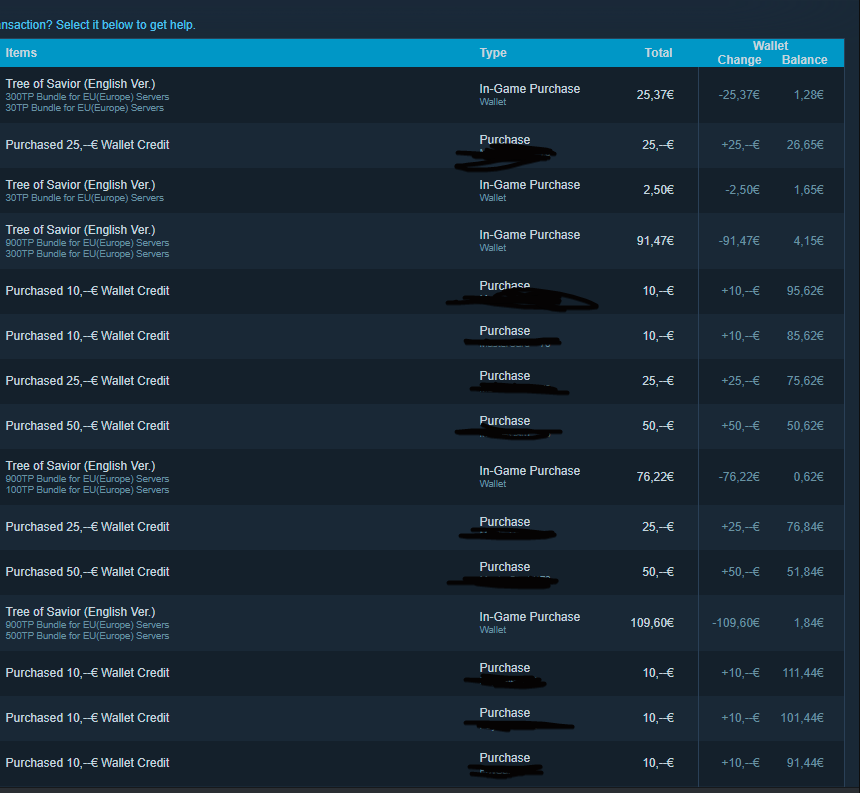 image860×793 44.3 KB
i guess ur just trying to start some ■■■■ now that you know that you’re done for, no one will ever take you into guild again and you’re nothing without your cheated items. goodbye and don’t make excuses

edit: @GM_Francis permaban this guy already or at least get rid of every single hacked item, do it for the sanity of the few players fedi has left~

Why do you think I admitted? I’m quitting already. You’re next, Hypocrite Normandy.

sure darkplague, report me and see if anything happens. just like you guys mass reported albero, nothing happened. you can mass report me next and see nothing happening because you’re just projecting.
meanwhile we mass reported you and what happened is that you got banned and had your items deleted. so in conclusion, we were right and we won.
btw, we already have 4 other players on fedimian who got luciferi before me and on other servers half the top players got it day one and the other half week one, i only got it today lmao. i don’t know how that is supposed to be unrealistic or make you a rmter, luciferi is fairly cheap. too bad you’ll never get it because you’re a cheater, should have just sticked to buying TP if ur so rich and you could’ve had the same gear with just a bit more patience than you had.
goodbye, maybe you should return for clown release because you could entertain an entire circus audience like this

so how did u get full luciferi when theres no supply of sole hunt vouchers on fedi market? one day u dont have a single piece, then on the next day already have full set?

same way someone got a full set before him i guess.

BTW darkplague admitted all of that, so the boruta card soaringarrow is using came from hacked items, gm should delete that too no? @GM_Francis

also nice on chiro, the only guy that was defending darkplague. :>

Normandy has full Luciferie? Not even 2 weeks ago he didn’t have BGs to transcend rest of his gear to lv.10. After the first 3 people bought most of stock of Sole Hunt resets off of the market he pops up with full set in 1 day? @Blubbolo i was saving for Orbital Arrow VV for 2 month after realising i wont buy it from anyone outside of the guild i spent my savings into Sole Hunt vouchers in case you were refering to me?
To touch the topic of Boruta Card, well, to be honest I dont know what to say, whether it is a fake or not i cannot say, in case it is i just wish to get my items from the trade back or any compensation, considering the last weeks big maintainance i’d guess they investigated all accounts that could/might have been in any relation to RMT events.

cos you know he didnt buy any, oki. /patpopo

yes, @GM_Francis he should look into normandy, and then delete that hacked boruta card too from the trade between darkplague and the others. >.<

and maybe some other items too, who knows!

i dont know but im saying its suspicious…

Normandy has full Luciferie? Not even 2 weeks ago he didn’t have BGs to transcend rest of his gear to lv.10.

you mean i was waiting on trans event? xD come on now, this is kinda pathetic. i know you were really stoked about having a freebie on wbr for the next months with this broken set but you don’t have to start ■■■■ now. else we can get started on your KSfarm1- who knows how many accounts and your hacked boruta card

edit: yeah sure rmtplague, i know ur really itching to start shiit now that you have nothing to lose but i didnt buy vouchers from anyone outside of guild xD