Constraint:
-use vanilla max level skill (no enhance at all) 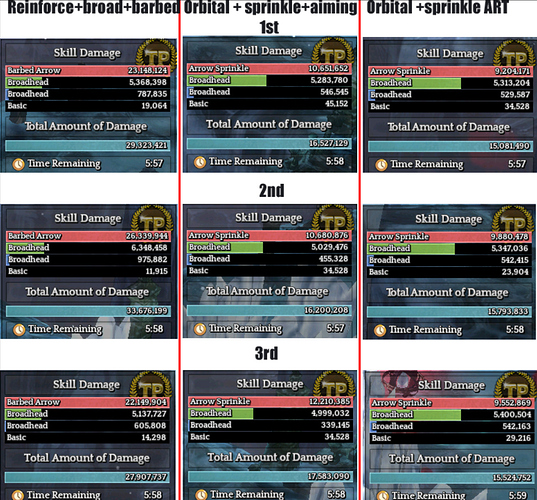 Are you using Ataka? or smugis? And what type of boss issit? If mutant/plant +11% damage against is added. or should be added.

barbed simply better since it provides bonus against bleeding, extra 2 hits against leather and overheat system instead of 3s skill duration which means it can proc ataka better
another outdated proof i ll say

ignoring blackwargreymon which can only debat without providing any actual data.

i simply compare reinforce barbed vs orbital sprinkle, no smugis no ataka, and this week wbr is insect. 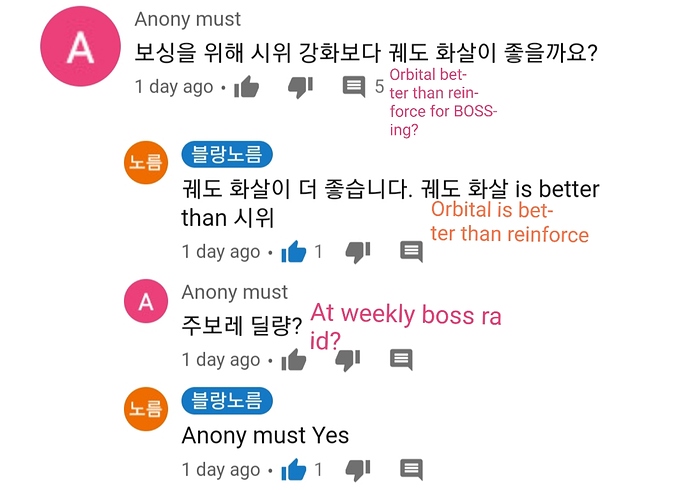 after reading that, it drives me to make this experiment

I have orbital too waiting for the rebalance

I’m wondering even if Orbital arrow ends up being stronger, would the ichor be worth it overall?

Reinforced ichor adds a little over 700 crit rate which would be beneficial for all of the archer’s abilities. Plus barbed arrow gains additional crit chance that would help against creatures with high crit resist.

crit rate come in many ways: karaliene set and new goddess/demon fixed armor ichor set that give 277 crit rate per part. Orbital arrow + 10% dmg vs plant/mutant too which still useful even when you are not critting. Top ktos mergen player switch to orbital arrow

While there are other ways to gain crit rate, there are still a fair amount of bosses that have high crit resist. 700 crit is another 2H weapons worth which is quite the amount. With how good ataka is I’d personally want to maximize my odds of critting.

Not saying orbital is bad, I like using arrow sprinkle so having that new effect is really cool. I can barely afford one so I’m hoping to learn which one would be better overall once we can test the sfr increase.

I’m still not confident that orbital will be so much better, but if you are talking about ataka, forget it. New legend set dont use ataka, the new set effets are weak than ataka, but the armor and attack value from the new set are far superior, and the new effects will receive a buff (already on ktest).

Ah, well even with new gear if we end up using these ichors I’d still be leaning towards wanting more crit across the board. Unless the new gear scales the crit rating to the point that 700 isn’t much anymore.

yeah, I prefer the stats from fletcher vv, 700 crit is pretty significant and not mentioning that 200 dex will be patched to 200 str on fletcher vv.

Remember that you CAN change weapons while using orbital arrow, so some mergens in KR server already use the following strategy: your normal bow (high enhance/trans/gems/enchant/awakening/random ichor) uses reinforce bowstring ichor, and they use orbital arrow in the secondary slot (the weapon do not need to be enhanced/transcended, but most of them use their old varna bow, you can simply use the vaivora bow itself without even turning it into ichor)
For this to work, every 20s (arrow sprinkle CD) you weapon swap to the orbital arrow bow, cast arrow sprinkle, and when the cooldown of arrow sprinkle starts, you swap back to your original bow (and the effect of orbital arrow will be maintained). This way, only the first ~5 hits of arrow sprinkle are dealt with your weak weapon, and all the other hits are calculated based on reinforce bowstring weapon, since damage per hit is calculated the moment the hit is dealt (not on cast).
I particularly hate this manual-weapon-swap-all-the-time-during-fight gameplay, but the possibility is there for those who want to use it.

i dont think that weapon swap trick is very suitable for itos server with so much lag these days, cant be compared with ktos server.
i prefer orbital arrow because it useful for both bossing and mobbing like spreadshot.