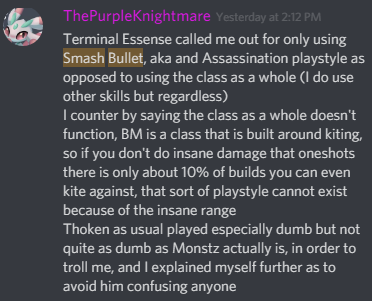 Reporting a disabled player is not good y’know?

Ignoring the PMs cause who really cares, I think the point is that you have your guildmates feeding your kills so that you can get MVP.

Which, I haven’t seen myself haven’t seen cause I don’t Gemstone every day, but it gets mentioned pretty regularly.

Do you deny that he’s doing it?

First one is u follow iggy second one is iggy waiting no one follow him in the safe zone he only moves to “fight” you he don’t do anything in the match.
I’m not mad because I die or something else or your style to do the things, I’m mad because u are getting mvp only farming iggy the most of us knows you are cheating doing that and plus you are whisper people who kill u in the feud, many of my friend call u cancer and block you, that is why I call you toxic player

You all had the option to not fight against me getting my class fixed, there was little support for it and people were actively trying to prevent it from being fixed. Now I’m forced to do Gem Feud on a character that cannot farm these insanely tanky crystals. Meanwhile you two shot them. So If I set up my own 1v1s, or fight people specifically who are equal strength to me, that’s just me leveling the playing field which should have been level in the first place!

Please fill in as much as you can : Date and Time(Please, specify the timezone) : 10:00, 2:00, 6:00 or 10:00 for 15 minutes Server Name: Klaipeda Team Name: ThePurpleKnight Character Name: Maria Bug Description : Chortasmata does nothing in Crystal Mine PvP. (letting us know what you were doing before, during, and after the bug happened will help us a lot) Steps to reproduce the issue : Enter Crystal Mine PvP Use Chortasmata Use Sterea Trofh or Carnivory Watch as absolutely nothing happ…

The post was made at the beginning of June, it is now November, 5 and 1/3 months later, over 150 days of my character who could kill the strongest characters, and my character that can kill these crystals being disabled.

4 posts actively fighting against the bug fix, but where is the demand that it gets fixed? IMC is not gonna bother with something like this. Players don’t even seem to want it fixed. The playerbase had the opportunity to change this, it’s so easy to do, but you all chose to do nothing, so do nothing now. I’m not cheating, I have barely any addons and none of them help me in combat, I don’t even use Zoomy like most of the players in Gem Feud. I’m not using two accounts, all I do is fight players I want to fight. Avoid the Sages, Avoid the Falconers, Avoid the Pied Pipers, Linkers and Lancers. I fight the players who I am on nearly equal ground, Iggy doesn’t Dethrone me, there is no range disadvantage it’s a much more reasonable fight than the other options usually.

Except today when you were the easiest kill, so I gave up on fighting Iggy and fought you over and over again.

dude dont try to change the topic plz, i enter feud in rare times and even i know u two are feeding and dont try to tell me clases are op just cause your weapon is not good, i have see you play and sorry but is not only coward you are actually weak but then again i m not atacking your playing style i m ataking the fact that you are feeding all the time to get the mvp dont try to say you are hunting Iggy since you know where iggy is all the time you even hide all the way so that no one kill you in the way cause sorry to tell you this but a lot of player dont like you since feeding? really? hunting Iggy? giving up in fighting Iggy? dont joke about the people in feud is actually hunting you before you feed yourself cause you are weak to get the mvp by yourself, worst is people dont even care about you and killl you using aoe atacks and you go in a stalking spree to try to kill them after they are weak or have no skill to kill you and i mean even that is cowards yes but ok is a valid strategy but then again you go and feed yourself try to deny all you want almost all the feud players know you are doing it and have you in a black list and no only because you are feeding they dont like you because on top of being a coward and a cheater you top everything being a toxic player the type to say if i cant do it is broken and even if you have a terrible weapon you dont want to farm another ? come one people using pve clases are killing you because they do farm good weapon and the bug are in every class but we are not crying so much and yes they are no feeding like you are, keep denying all you want i still support this report and hope the staff do something about people like you

Some bug does not justify Cheating.
IMC should investigate this case and if true, suspend Cheaters like this.

es, it is a bug that specifically affects Druid and only Druid, for Exorcist builds it’s not too game breaking, it just means they die easier and have slightly slower crystal killing, for a Druid as the main class though it’s completely game breaking. You cannot kill the crystals or the players without Wolf Form which is not the form I chose to build for, and so it does nothing.

So instead of trying to get me in trouble for PvPing specific people in the game mode, how about you try to get my class fixed and then I’ll fight you all. While farming gems

again dont try to change topic you are feeding stop lying i can even take video all i want i i think i will if i seer you in feud again lol and yeah you are cheating ofc you know where he is? lol ofc i mean you two are feeding

Keep replying he either will be to afraid and stop cheating or he will be banned regardless he will stop.I think he won’t cheat again because now he got too much heat on him.

Keep going because the more this thread gets replies the more people will expose this cheater and that IMC wil notice this thread.

…listen to this song by Shaggy “It wasn’t me”
LMAO

funny thing is he still deny it he get the hate of almost every player in game it was time someone report him, hope he get what he deserve i don’t care if he is a cancer or a toxic player i just ignore the noobs like him but a cheater lol no way i m not saying anything here!

It is not cheating, it’s just being selective about opponents, setting up the 1v1 instead of charging in on someone much stronger or looking around for 30 seconds and not finding anyone to fight.

IMC has logs and tools to check what was done.
Call it what you want, in some games its “win trading” and that is very not Okay. 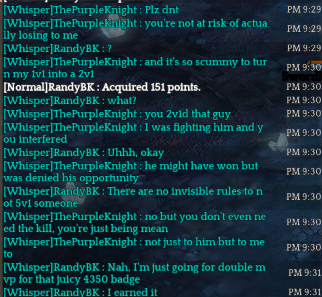 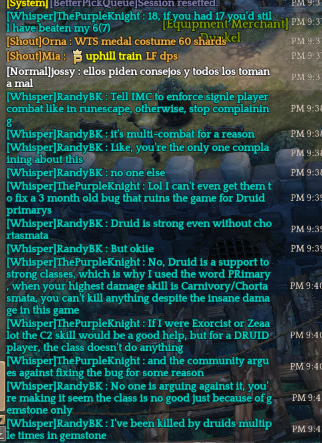 Just work hard and all your efforts will become more fun in the end.

I’m not all that toxic 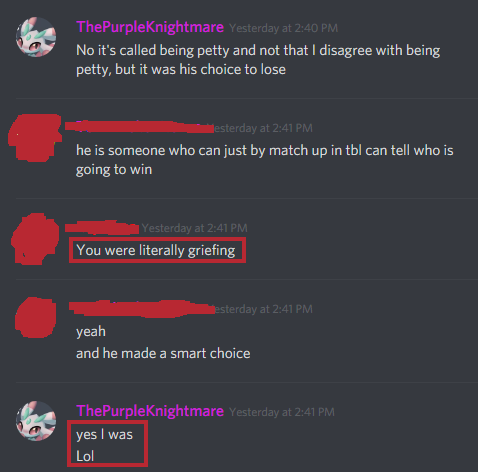 Now I’m forced to do Gem Feud on a character that cannot farm these insanely tanky crystals. Meanwhile you two shot them. 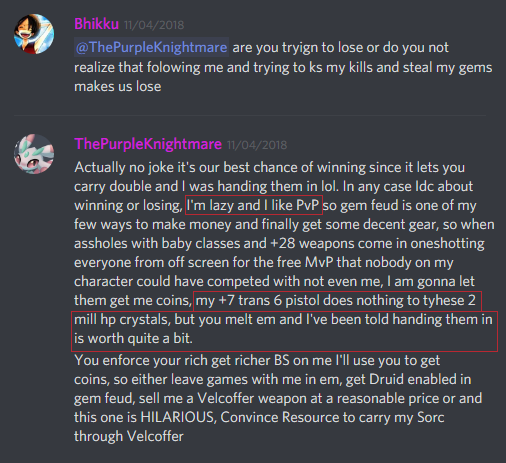 No time to read everything on this thread unfortunately…

But my impression is that

Woah so many actually caught this guy admitting he is win trading.Gets annoyed when you get in his way lol of his so called 1v1.It’s 5v5 for a reason and not 1v1,if you want a 1v1 duel outside.