How much crit do you need for ataka to be better than smugis?

More specifically, if you’re a swordsman class that benefits from strong attacks and/or fake multihits like a Doppel/Barb/BB. Everyone agrees that (pre-incoming buff, at least) ataka blows smugis out of the water with the Dragon Strength passive from a level three Boruta seal, but what about without one?

Does anyone have a clue if it’s better or worse? Or, say, better for some content like lower level bosses but worse for the weekly bosses (which generally have high crit resist)?

More specifically, if you’re a swordsman class that benefits from strong attacks and/or fake multihits like a Doppel/Barb/BB. Everyone agrees that (pre-incoming buff, at least) ataka blows smugis out of the water with the Dragon Strength passive from a level three Boruta seal, but what about without one?

You actually forgot to mention the most important factor, which is your attack. The closer you are to cap without Smugis,the less impact does Smugis set actually have.
Even with 50% uptime, the +160% - +240% damage boost will actually matter alot more if you are far away from hitting cap, because the boost also applies to your critical hits, while Ataka only doubles your critical hits.

Generally speaking, unless your skill has less than 0.6 seconds animation time + 0.3 seconds delay until damage is dealt, you will most likely sit around 1.6-1.9 seconds between possible multiplications of critical hit via Ataka, since the set effect has an effective 1 second delay before it can apply again.
Since the maximum crit chance will be 60% (without any minimum crit effect involved like Marnox card), we can apply an average 2-2.5 seconds delay between multiplications, unless you have a skill that actually hits multiple times (e.g. Stabbing), allowing you to trigger the effect more frequently.

This boosts your average crit damage from 150% to 300% (since it duplicates the critical hit) every 2 - 2.5 seconds, averaging at about +75% per second. Smugis can also net you around +80% to +120% per second average if we factor in the cooldown time and the skill execution time of about 1 second.

Blossom Blader is a very special case because Start Up will increase you final crit damage to 150% x2 = 300% with an average up time of 33% without Dievdirbys, meaning you’re much more likely to hit damage cap with your crits, especially if you have Barbarian in your build, when Start up is up.

To make Smugis viable, you’d either have to deliberately have low attack (e.g. with a one hand sword build) and to time Start Up with your Smugis cooldown so you can use Start Up immediately when Smugis effect is over to cover for the average low damage without it, or settle with a build that doesn’t boost your damage as much (i.e. without Barbarian and without Doppelsoeldner).

I could see a niche use for Smugis on a Blossom Blader>Rodelero>Peltasta/Murmillo, using the new Vaivora sword for Rodelero, but it will probably still not be as useful.

Another bonus of Ataka is that it is independent from cc effects/mechanics, which can ruin your damage boost on Smugis if the enemy goes into an invulnerability phase (e.g. Velcoffer,Skiaclipse) while your buff is up, which IMC certainly forgot when balancing both set effects against each other.

Actually, you don’t have to write it so long tho, the more DMG% you have, the less effective is Smugis because of how damage formula works, normal damage multipliers are additive, that includes Smugis.

After the buff, they are actually pretty similar. So just go whichever you want, but Ataka will need maximum crit chance.

One thing that is correct is, if you are already capping without Smugis, then Ataka for sure.

The more important aspect to consider is, the purpose of it. Ataka is a strictly single target only, while Smugis can excel in mobbing and pvp.

So smugis would be better on a 1h spear and shield like hop rod murm pelt?

So if you have skills that have large AOE, let’s say with Dragoon or Lancer Skills, would Smugi be better? I am currently far from 4k crit and wondering if I should invest into Ataka now or SMugi and then Ataka

u can go smuggis for now yeah. dont forget new armros and changes will happen soon with many new armors being added. id go smugis if u lack the crit/boruta

I have 4k crit and lv3 seal scout… which one is better for SR?

For SR Smugis is better, because SR does low damage multiple hits. Ataka wont do much with small damages.

Umm, I’m curious also … for a Scout BM/Sheriff/Linker … what is better? also what is the Damage CAP now?

I’m using Ataka but I need to be near the target for it to hit ( ataka effect ) but I’m kinda squishy … should I go Smugis? I only have level 1 Boru Scout seal …

this is with skill Lifeline … 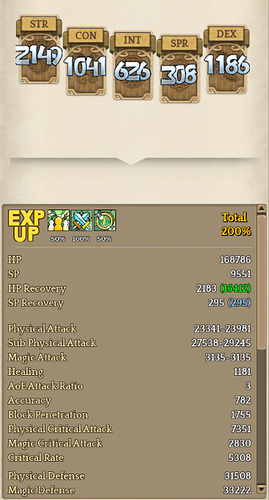