[Guide] A Basic Guide to Endgame Enhancement and Transcendence

Hi everyone! IMC recently released an equipment guide that is sort of like a flowchart to help players generally decide where they should go looking for equipment upgrades. Those of you that might know me would know that I really like looking at numbers, like when I did a bunch of enhancement simulations. This is a guide that assumes you know the basics of how to upgrade and you’re looking for a comparison between different upgrade options.

This guide will focus on how much upgrades will improve the primary stat of your equipment. For a weapon, that’s the physical and magic attack of the weapon. For equipment that’s the physical and magic defense. I’m assuming all other things equal, since all the other stats and effects really depend on your build. When in doubt, usually you won’t go wrong prioritizing attack, if you’re interested in doing damage.

Here’s some basic information that you might need to know.

Base Primary Stat and Transcendence

Transcendence is the upgrade process that eats up blessed gems to improve your weapon. Other than emphasizing that you should never gamble to transcend equipment, I won’t go into the details on how to actually transcend something. Transcendence gives you +10% attack, based on the base primary stat of the equipment. It caps out at level 10, so it is possible to get +100% attack, which doubles the attack on a weapon with zero enhancement. You can see an equipment’s stage of transcendence by pressing shift when examining an equip’s details.

Note that generally going up a tier in rarity will put you at a higher primary stat than going up a level bracket. For example, a level 360 legend equip has a higher primary stat than a level 380 unique equip. Level 315 Rare equipment is an unusual exception to this rule, and I’m not sure why this is the case. IMC’s equipment guide site serves a similar purpose to this listing of equipment, but I find it useful seeing it all organized in a list like this.

Enhancement is the main luck-based upgrade that you can perform on your equipment. It is represented by a “+” in the front of an equip’s name and can be further examined by pressing shift when examining an equip’s details. 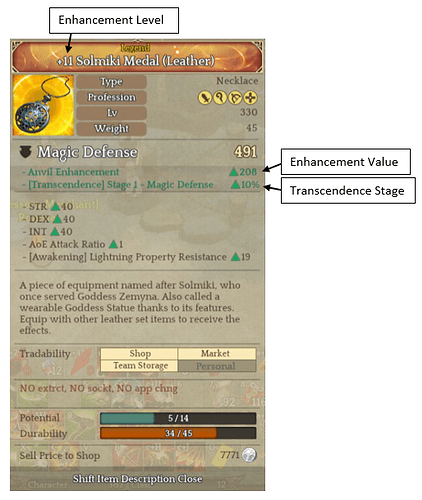 Enhancement is the step that might stop you in your tracks, so you should go about this carefully. Enhancement, no matter how you go about it, will depend on your luck and you have a limited number of tries (this is the equipment’s potential). Once you use up your tries, your weapon is effectively ‘spent’ and you won’t be able to enhance it further. If enhancement doesn’t go well, the final overall strength of the weapon will feel limited. Because of this, you should see how well enhancement goes before making further decisions on how to upgrade a weapon.

The amount of bonus attack from enhancement gets better with enhancement level and jumps at certain levels. At +6, +11, +16, and +21 (you don’t get this bonus after +21) you get an extra-huge spike in bonus attack. Because of these jumps, we consider these enhancement levels break points, levels that you target and levels that are good places to stop trying to enhance. Because they’re such a big deal, I will later only compare equipment at these break points. I’ve included some tables that show how much bonus attack you get from enhancement, and a graph to visually show how significant those jumps are.

At the end of the day choosing an upgrade depends on the balance between how much you want to invest and how much stronger you want to get. Getting to a high enhancement legendary equip would usually give you the best results, but take the most investment. We’re talking weeks upon weeks of work here. Settling for a lower enhancement Legend equip or a high enhancement unique equip could yield similar (but somewhat worse) results. Hopefully the following tables will help in deciding exactly how strong of a weapon you need to get something that counts as an attack upgrade. The tables are for staves, so transcendence for the weapons compared here is more effective than transcendence for something like a pistol.