We have made an announcement regarding ‘[Growth Support Server] Wheel of Goddess’. 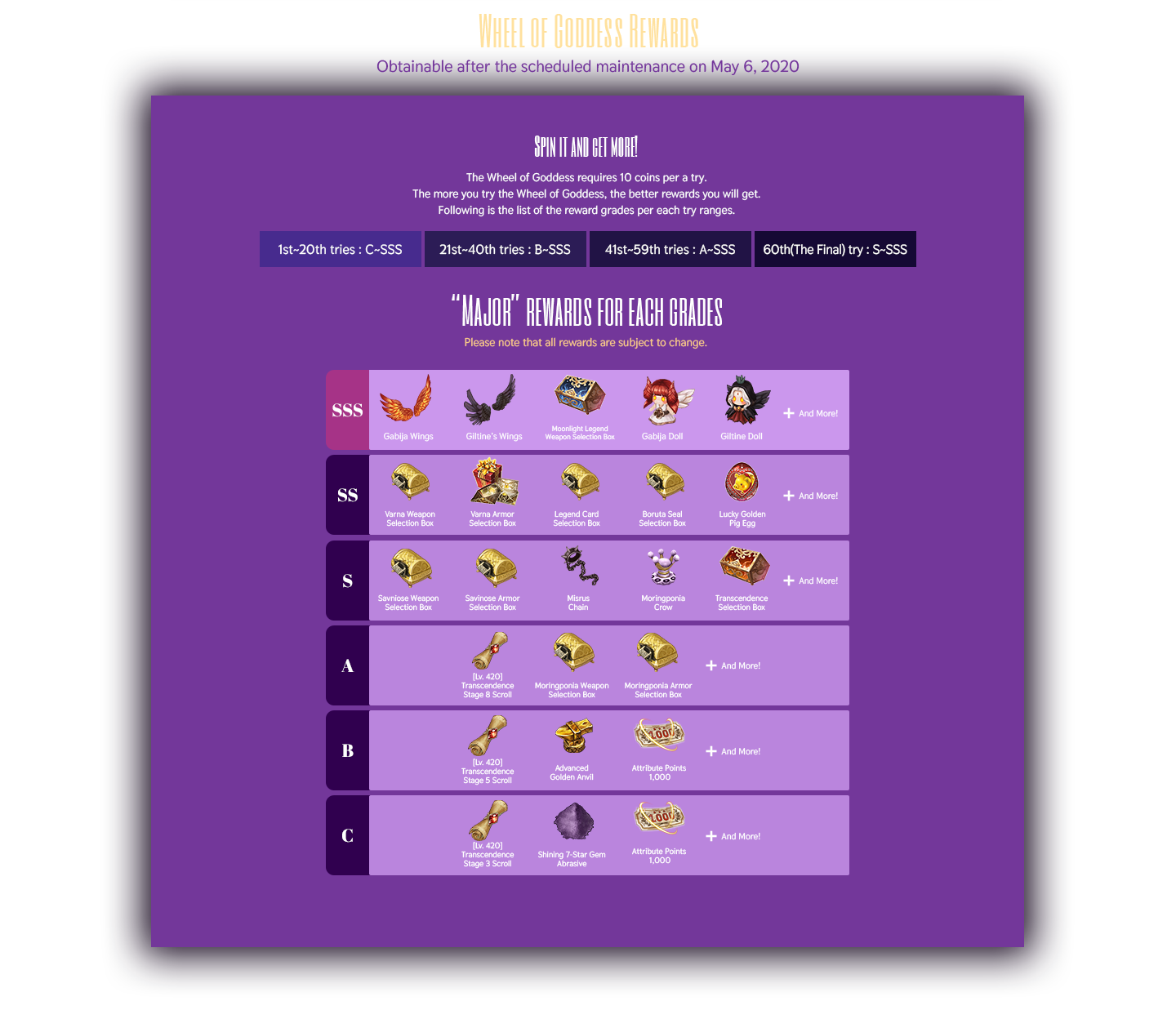 Thanks for ruining old server/players…

is that the Rumoured moonlight Skia Varna Trans 10 + 16 Set for New server?

It is. And look at rewards for ranks below… this is disgusting. Free Gabija/Giltine items worth hundreds of millions of silver, which people spent thousands of TP for on the regular server, free Varna, legend cards, seals, golden pig, transcendance galore…

Honestly? I’m not fussed. If there’s one thing I’ve learned about the gachas in TOS it’s that you can more or less forget about getting the rarest items.

Are you serious, imc ? If you bring Giltine Wings this way back, i’ll quit. I put so much work and irl money in to my Giltine Wings, and now you consider make them obtainable via ingame event ?

the event would be ok if it wasn’t for the fact that the new servers are then merged with the old servers.

The patch of episode 12 really didn’t do much for me to be honest. I got over 4k additional attack from the returning savior buff, and I’ll probably stop playing again once it runs out, simply because of the fact that you cannot play the new maps with less than 20k attack.

It would be ok if the monsters had a higher drop rate on nucle powder, sierra powder and random stat gear, but the drop rate is way lower, you basically never crit and still are supposed to farm forever to get those new ichors just to become able to crit again/deal more damage?

I can live with using 4-5 skills to kill a few enemies, but if they don’t reward the time that I spent on murdering them, neither in the fields nor in challenge mode, then why should I continue playing the game in the first place?

The game is all about farming, but when you farm you are either cucked by such events that give new players a better equipment than you have for free or by IMC to make farming harder and less rewarding on top of it.

Problem is… it is not gacha. And the 600 coins to be able to spin the wheel 60 times are trivial to get. I’m sure some people will make dozens of bot accounts, farm the coins and nothing else, wait for May 6, spin the wheel on all accounts and reap free Gabija/Giltine accessories, free Varna, and like it says on the picture, “and more!” This makes me sick…

maybe stamp collection and other events in old servers had trans3,5,8,10 scrolls and savi equips are just given to new servers(thats okay)
but what i dont understand is, most of these itemsx were never in OLD servers because if there was never an event like this in the old server(boruta seal box, moonlight varna equip, giltine doll,Legend CARd BOX) , why just give for only new players??
Probably in may, the new (old bot accounts) players will be way stronger than players in old servers. Not to mention the Blessed Gem(main item in market economy) will crash
SSS ROLLS
Giltine Doll??(thats like 1.5B silver given for free? )

and there’s not 1 Good event for OLD Servers…i CANT STAND THAT!!!

I really doubt the chance to get good prizes is THAT high… this is still luck based, right? Like the Goddess Medeina Wheel?