So, we got a new event a few days ago and it has a lot of rewards. You can find the announcement here. Thing is, it’s really different from events we’ve had in the past, and somewhat confusing at times. So I want to make sense of some of these things and discuss what other people are doing to see if there are any good ideas I’m overlooking.

First of all, you have to go to an event notice board to participate in this event. There are three in the game, one in each of the major towns. 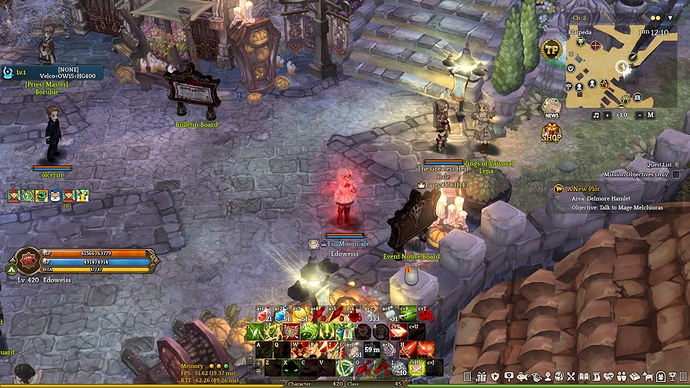 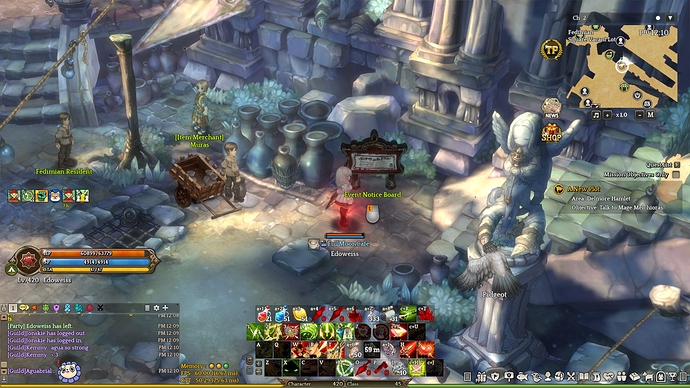 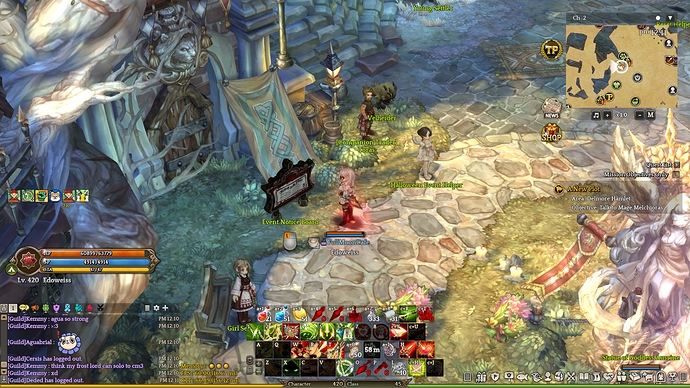 To begin the event you want to select “The Grimoire Master” and then “Obtain daily Coin, Scroll”. You will get 2 items: a [Event] Monster Selection Scroll and a handful of [Event] Ancient Coin. The selection scroll is something you use to purchase monsters. The ancient coins are the currency for purchasing said monsters. You can get more ancient coins by doing various content in the game (like the level dungeon, saalus, etc.). 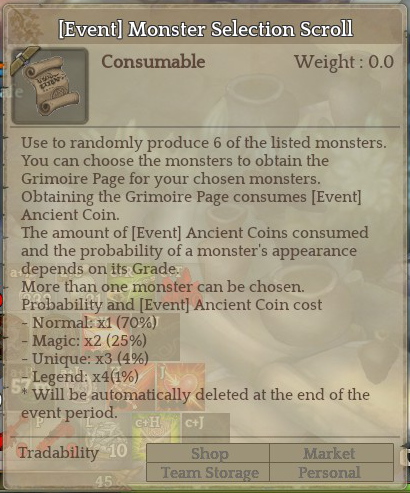 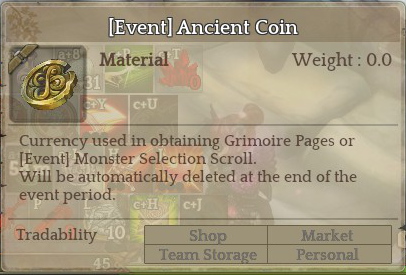 When you use the selection scroll you will be offered a random selection of monsters at different costs. You want to buy as many high-cost monsters as possible while also prioritizing duplicates. Once you’ve chosen your monsters, you can register them by using a consumable scroll that the game puts in your inventory. You can register only 30 monsters at a time, but that shouldn’t be a huge issue since you can just hold onto extra in your inventory in the form of scrolls. After forming an initial team, hold onto extra monsters in the form of scrolls until you get enough duplicates to evolve them into higher star-ratings. 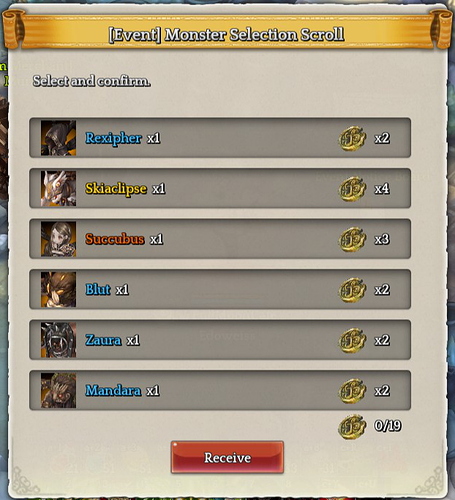 Try to do a lot of things in game outside of this event to earn more coins so you can have greater purchasing power each day. You can get extra coins by doing level dungeons, mercenary missions, saalus, uphill, and legendary raids. If you are doing everything and find that you have a lot of extra coins to spare, you can choose the “Trade in…” option at the event board to buy more selection scrolls and have more attempts at buying the monsters that you want.

If you press Alt+T or type “/grimoire” in chat you will be able to access the event UI. 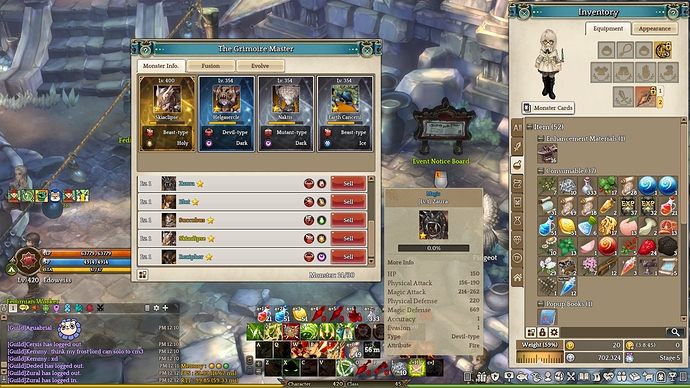 Leveling Up Your Monsters

Your monsters gain EXP only if one is summoned. To summon a monster, you need to register one in the leftmost slot of the grimoire master UI by dragging the desired monster into that slot. Then you need to put the summon action on your hotbar and use it. Like most any other skill, you can find it by pressing F3. 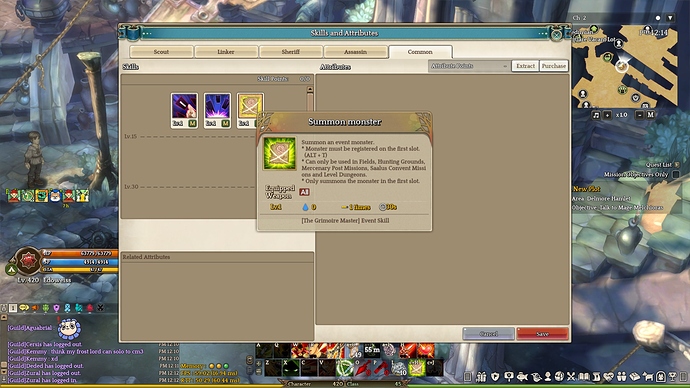 It would seem that your monsters gain EXP only as long as you’re within level range to gain EXP. It seems that level dungeons, CMs, fields, and hunting grounds would yield EXP. When you first get a monster, it is level 1 and very weak. Since EXP is rewarded only at the end of things like level dungeons and CMs, just make sure to summon your monster at the very end so there’s no time for it to get killed. There is a CD for summoning, so be careful about your monster getting killed at an inopportune time.

It’s kind of like old partis solutions all over again (for those of you that remember that)!

Actually Using Your Monsters and Getting Rewards

Once you’ve leveled up your monsters a bit (one CM is enough to clear some of this event), go back to the event board and choose to enter the Remnants of Bernice Dungeon. Once you’re inside, it’s pretty simple; your monsters will do all the fighting. All you can do is issue the occasional movement command, and that will mostly be just to avoid attacks and make sure your monsters don’t get killed stupidly.

Once each day when you kill a boss monster, you get 1k attribute points and a monster album box. You also get rewards for the first time you clear a particular stage. So, I would just run the Bernice dungeon once a day to get the daily reward and see if I can clear any new stages. Any more than that isn’t a productive use of your time.

After the first five stages there will be gimmicks that require your active participation or more specialized party compositions to overcome. Here are some, courtesy of @Friend.

Stage 8-10 - Meteors fall from the sky. Move your monsters to avoid them.
Stage 13-15 - Electric damage between your monsters. Spread them out to avoid the damage.
Stage 18-20 - High damage lasers. Must be dodged.
Stage 23-25 - Fire tiles that do global damage, removed by having a monster step on them.
Stage 28-30 - Full Silence. Your monsters cannot use any skills.

After evolving, it becomes 2 star, and it will begin to use a skill in addition to its basic attacks.

What happens with the level of the monster if you for example evolve it using a 350lv and 2 lvl 1 monsters?

What happens with the level of the monster if you for example evolve it using a 350lv and 2 lvl 1 monsters?

It takes the highest level of the three.

Something like this could be a fun permanent side feature.

i hope this isnt an event but more of a feature.like how popo point was an event but now more like a feature with seasonal update.

They said that for now, it will be a temporary event, but they plan on taking feedback from the event and working it in to make it a permanent feature.

Stage 8~10 : Meteor: Periodically a circle indicator appears ~25k damage if you get hit
Stage 13~15 : Spread your units or they take 4~7k damage / second
Stage 18~20 : Denoptic Lasers: Two invulnerable bosses spawn that periodically shoots lasers that do ~50k/hit. Must dodge.
Stage 23~25 : Fire tiles which do global explosion, you must move a unit on top to remove. ~80k damage
Stage 28~30 : Full Silence. Your units will not use any skills.

I have not gotten past 28F yet. 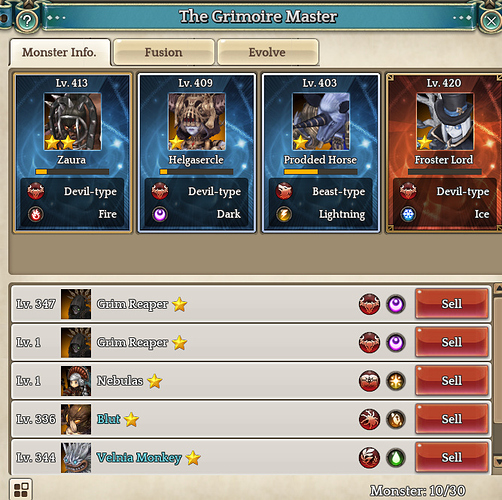 It would be much more appreciated for me if it the event was released at another time, when it’s paired with other big events like the Stamp I often feel like skipping one due to how time consuming both events can be. If this was indeed a permanent feature that you could do at your own pace then it would be perfect.

A lot of effort was put to make the Pokemon event better, if not permanent at least make it have its own time without other events. 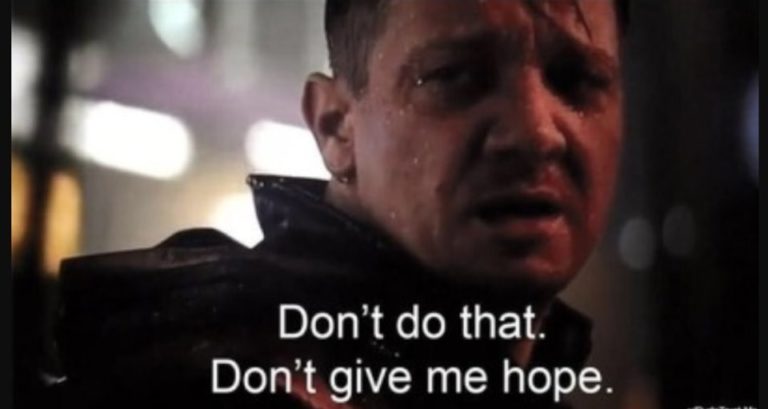 How does evolving works?
I know fusion you take 3 of the same monsters to increase a star,I assuming the max stars is 10?The more stars the stronger the monsters becomes.

Hi, which is the maximum star level? just 2 stars? or more?

we can also get some quick info about it ingame at any time, hover the ‘?’ in UI

my favourite event so far, its cooler and much relaxing than old pokemon since reward are per team and easy to level up.
it also helps newer player to do cm since their damage are pretty high for s1-5
and i noticed that if you reset cm/dg/mission it doesnt give you a coin, its quite nice in some way that every player has the same “chance” everyday even though its still a rng roll

ill just give my feedback a little bit

tbh, personally i would love if you to be able to summon it in town, but being real it might be causing crash.
(also please make permanent version of this)

The rewards are really per team and not by player?

The rewards are really per team and not by player?

You can see towards the bottom of the announcement which things are character versus team-bound. Basically, attributes points and silver ichor kits are character-bound.

I notice that but I was wondering was there something I missed.It is worth doing it on ever character imo.

nice roll there.is it getting better if we progress further?cause theres always whies, but look at that roll.can anyone confirm this?

I was just lucky. That was a funny roll on a character I’m not focusing on.

I notice that but I was wondering was there something I missed.It is worth doing it on ever character imo.

I’m pretty confident it’s generally not worth doing it on more than one character. Some of the per-stage rewards are character bound, but you can only receive them once per team. It’s weird. Only situation where I can see you doing an alt is something like this:

You have a main that’s really strong but basically maxed out in attribute points. It doesn’t need more. You have an alt that needs attribute points but isn’t very good at leveling your monsters. You get some basic monsters on the alt and just clear stage 1-5 every day for the 1k attribute points. Then you try to push as far as possible on the main and actually try to clear everything else.