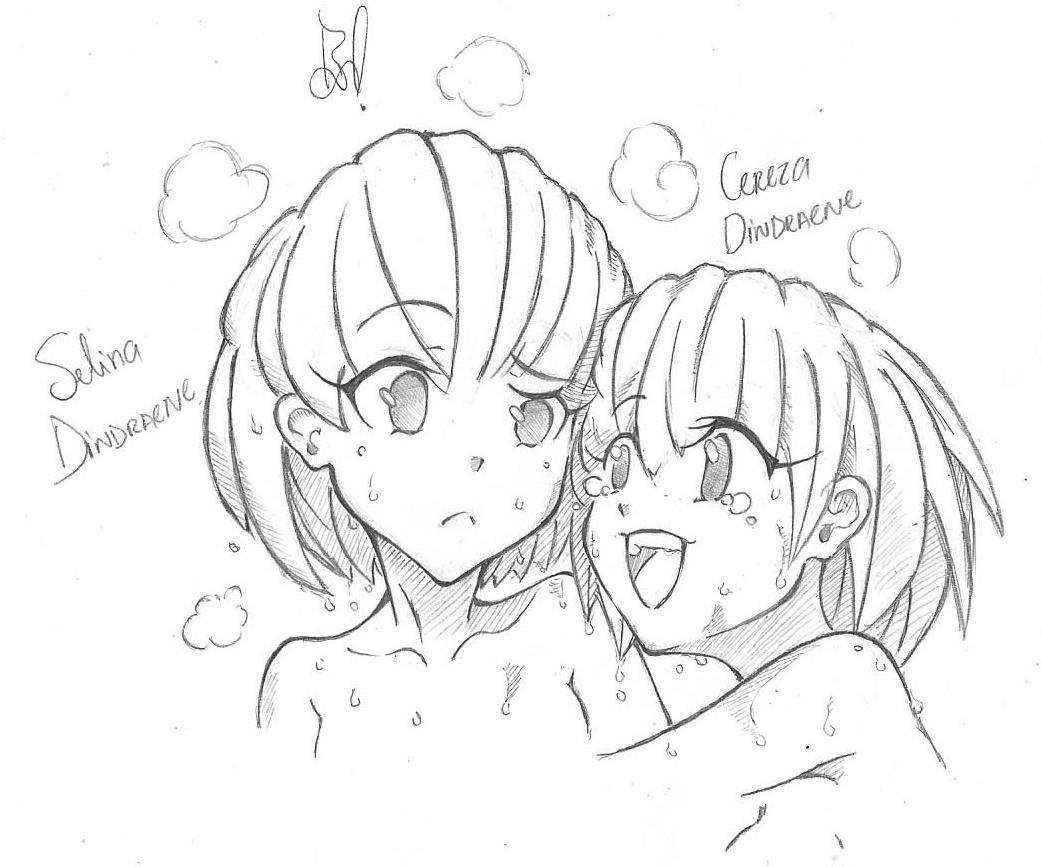 Selina, a necromancer, was taking a shower after a long and exhausting day farming some items from the monsters at Nahash. She was kinda upset because she spent lots of days at West Siaulai Woods looking for White Ribbon Decoration Boarder unsuccessfully.

Someone suddenly invades the bathroom and grasp her.

She interrupts herself after seeing that cute face next her chest. Was her little sister, Cereza, that was crying with a big smile.

Cereza started to talk about to be a Fencer in the future and what classes that she could get till there. Meanwhile it, Selina continues taking her shower till…

[Written by: Behemoth! behemoth-arttos.tumblr.com ]
(I dare you, Saviors, to write a short story about your characters!!)

Awwww… sadly i only know hue means lol bro XD
my bad i dont speak portguese…
buy yeah one day i might pick it up maybe?
and yeah yuri =p once i learnt how to draw faces… lol

let me help you…

It will rolling a yurizim one day ~

Sorry did my best with translate. correct me if I am wrong…

huahauah never trust in google translate, man XD
I said: whoa, you are a fellow countryman? Could be yuri in the future, a little bit
auahauahu that was an insane translate

I wrote that with brazillian slangs, it’s impossible to translate like that XD
Cuz you wrote “HUE”, I thought you are a br too
~my bad (but was realy funny)

She was kinda upset because she spent lots of days at West Siaulai Woods looking for White Ribbon Decoration Boarder unsuccessfully.

I know dat feel too…

UGHHH!! YOU ARE SMELLING KEPAS!!! - Yelled Selina, scrubbing her sister with a soap fiercely.

hahahahaha!!! this caught me!! that oniony-onion (whut?) smell of kepas…

BTW your art really is nice!! Love it!

are they twins? because they look like almost the same!!

XD haha thanks!
Well they aren’t twins, their age are based on their levels in game.
Selina is older (lvl 230) and Cereza is younger (lvl 40). I like to imagine Selina is around 25 years old and Cereza is around 16. But I used the same haircut when I created them, btw… Selina has white hair and Cereza is blonde~

Ohh I see…They are very very identical due to their haircuts… If it wasn’t for the name labels, I would be confused… but still so cute~

My transcended spear was ready, and it’s also glowing.
The wall in front of us was so high we cannot view the party on the other side.
My party mate’s bird is circling the skies above us and is ready for action.
The lancer riding his trustworthy pet is aching to rush out.
A sturdy gladiator clad in his big shield is putting on his helmet ready for battle.
And our scout, laying his traps for any of our enemies dumb enough to fall in an instant death.

The crowd is silent in the whole arena as the clock winds down.
The horn for battle sounded.
We gathered all our inner strengths (buffs) and shouted for victory.

I face the sky as I threw my spear out in the oblivion. I felt like all the force of my throw came back to me seven times stronger.
My falconer friend, I can still see from the sky as he was being lifted by a mass of green light.
The lancer who rushed on the other side of the wall was frozen, ripped into shreds by shards of ice flying across the arena.
The gladiator mushing his way, hacking everybody, jumping around, but never did any damage to our enemies who had an invisible shield reflecting his every attacks, and he was carved to death, mulled by giant owl statues.
And our scout? He never had a chance to hide from a massive wheel made of spikes floating inches above the ground, with a smiling monk smashing it hit after hit after hit. Cruelty.

The battle has ended and at the end of it, I realized . . . easy five points.