BUG Tornado Guild gets no reward for Battle at Sulivinas Lair

Bug Description :
Tornado Guild, this week we killed borutas on Thursday 26th around 10 pm and did it in about 28 minutes but our time wasn’t displayed by kupole npc in vedas plateau and we are out of ladder. We have better time than 4th and 5th places. You can see in the attached video we killed the dragon and got guild event rewards but we have no rewards from Borutas ranking so we need an explanation and maybe a compensation because other guilds got our rewards

Error happens from last week, the detail was reported in ticket.

Kindly send a ticket to customer support regarding this for further assistance.

Do we have any news about this?
#FixBorutaBug

Maybe I’m an idiot, but are you sure you got the territory during last week’s GTW? Try to check the full map to see if you see your guild’s emblem on Salvia Forest. I remember one week when the GTW system was bugged and the territory was not registered, so instead of doing “Battle at Sulivinas Lair”, the game was registering the Boruta fight as “Ancient Being” and only rewarding the “basic” part.

Another thing to check: there’s currently a critical bug with channel mismatch on instances which lead people not being able to attend Boruta. What can also happen is the guild master not being registered on the proper channel, and that could make the kill not count.

If the Kupole does not tell you your time after ending Boruta, then the kill did not count and it needs to be repeated. This could be for a variety of reasons, but it is a good idea to confirm the time to make sure that it counts for the week.

Tickets were consumed. Last week, when we killed boruta with the fail sign and didn’t recibe guild rewards for killing boruta, the kupole showed the time. We tryed again because we didn’t know if it was going to count for the ranking. What we found out at that time was that the second try was adding more time to the first. After killing boruta before it failed ( we got guild rewards) when we talked yo the kupole the timer didn’t show yo. So se just asumes that when u kill boruta the timer doesn’t show. This week was the same so why would we be suspicius. The game is just bugged it isn’t our fault at all and if u can’t kill boruta when timer run out then why boruta doesn’t Froze like bosses in veranice dungeon.

According to the rules, you cannot repeat Boruta, consumed all 3 tickets and we obtained a basic reward.

We had territory the previous 2 GTW, from Sunday 15 to September 29, our emblem was seen on the world map. I am the guild leader and I was on the same channel with everyone when we killed Boruta.

We were rewarded but,
The problem was resolved? What precautions should we take so that it does not happen again?

We had territory the previous 2 GTW, from Sunday 15 to September 29, our emblem was seen on the world map. I am the guild leader and I was on the same channel with everyone when we killed Boruta.

That is good to know. However:

Last week, when we killed boruta with the fail sign and didn’t recibe guild rewards for killing boruta, the kupole showed the time.

Don’t tell me you killed Boruta after the 30 mins were up… Once the “Mission Failed” sign appears, EVERYONE should immediately press “return” and leave, because Boruta can still be damaged during the time (15s? 30s?) the sign stays on screen but at that point the hps have been saved and Boruta flagged as “alive”. So if you kill him you’ll get the basic rewards, but nothing more since your entry would have not been counted as a kill.

@GM_Francis
I would appreciate kindly reviewing a new ticket that I generated, bug occurred again and NPC Kupole in Vedas does not record the time of death.

Our concern is that when announcing the ranking on Sunday 7PM in case of having time to enter the ranking our reward is received by another guild as before, this would bother us a lot since this is a competition and our rivals are being rewarded for a game error

@GM_Francis We believe that the 5th corresponds to Guild Tornado, send another ticket with more information to validate it.

@GM_Francis Good night, as we suspected our time does not appear in the weekly ranking of Boruta and our guild did not get rewards

The same ERROR for the fourth time, I already sent another ticket


Other Guilds continue to take our rewards 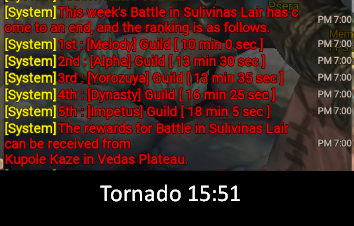 We are cursed, bring us a solution to the problem

Post the whole video. You have the video literally showing that the NPC did not recognize the kill, my guess is that someone is canceling the event.

Gm has the full video.
It was not canceled.
When you cancel the event, there is no reward.

No reason to see anything else. Can clearly see the boss kill message with timer and then attributes dropping. Hope Tornado gets their proper rewards.

Hope they fix the rewards, not only give tornado the rewards they deserve, but also “remove” the rewards from the guilds that didnt =/.