i spent 2 weeks to practice it everyday and finally cleared it and farm it
some people will abuse this and farm the raid, can be even faster/ more lucky than us 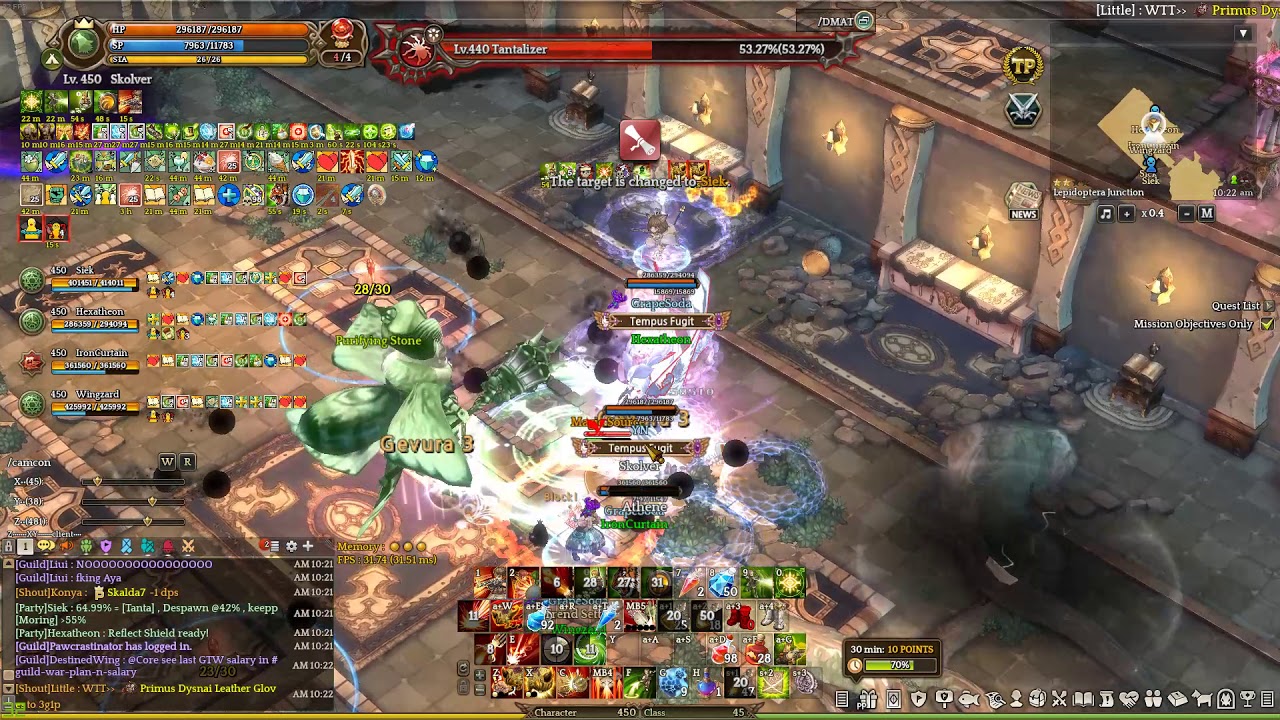 i tested it just now, Skill “Stop” from chronomancer class without attribute “Stop: Control Boss Monster” is bugged. it cannot stop and control boss but it will ban boss channeling skills everytime it is used. it is not intended, because without attribute “Stop: Control Boss Monster” the skill stop cannot affect Boss, and even if with the attribute, it will stop boss only once, and the boss will be controlled. this is obviously a Bug and players abusing this bug to skip insanely tons of gimmicks in hard moringponia legend raid.
2 Likes
Don_Falce July 16, 2020, 10:17am #2

And nothing will be done to the people exploiting it, as usual.

It’s not new, anyways many team have already their accessories so it’s pointless now. They just keep exploit secret until you reveal it…

Stop have always been working on bosses…

A bit late of a report of tooltip mistake or rather delayed fix from IMC. Anyways ktos have already fixed the attribute.

Stop attribute: Boss holds the boss for 10s for one time

Subsequent casts of stop doesnt have this 10s duration, or rather it disrupts the boss for a short fraction of time, cancelling all forms of channeling/casting. It was a popular mechanic since velcoffer, and even used in Skiaclipse.

Goes to show how IMC don’t test their game either way. Dont forget the drama earlier this month where the accused ktos players (for exploit) stacked damage reductions effectively to clear legend witch. It’s easy for you to call exploit, while players consistently reinvent strats/meta to clear faster.

Do note that particular party linked above is only ranked 7 on the server. The top 3 are at least 3 minutes faster than his runs without any videos. Are you going to blatantly accuse them of exploit as well? Not all parties run a chronomancer as well

last time i abused pyro ele bug. where’s my ban?
bear bug. hello?
crying over bug like this into imc is useless.
unless its TP bug.

That skill requires an attribute to even work on bosses, and even then it’s explicitely stated it should work only once. At least don’t take us for fools by even debating if it’s an exploit to begin with. It is, clear and simple.
People using it know exactly what they doing. It’s just that they also know nothing ever gets done about it, so they’re free to keep doing it until it gets fixed. And nothing will be done this time as well.

What i understand on the #discord and in the comments on youtube (not on description), the Guy called this a SpeedRun.

The concept of the Speedrun is to clear something very fast by exploiting every mechanics & mistakes made by the dev before a fix.

To achieve a high level of play, speedrunners often have to reason about the game differently from the way that ordinary players might. Speedruns follow gameplay routes that are planned out carefully and often involve disarranging the intended sequence of events or skipping entire parts of it. Other speedruns exploit programming mistakes, or glitches, that a skillful player can exploit to their advantage.

Blame IMC because they already know about this and they do nothing? (next update maybe).

Can consider it’s ok (for a lot of players it’s no) but?.. The guy make a showtime to show us how to make it faster with some mistakes made by the dev? (Problem the player was not very clear about this) when you saw the video for the first time you can’t understand this.

Maybe next time (or not if ban), can be better to explain this speedrun on the description or make an explication before start the run would be better.

Enjoy or hate the video, this will be fixed.

This strat particularly require the the boss stop attribute to be turned off.

It’s not stopping the boss, it interrupt the animation, hence it can cancel channeling skill of moring (raise,muta, swap) and do it repeatedly.

It might be an unintended strat by the dev or a bug but I honestly wouldn’t call it an exploit. Think about it. Taking the chrono doesn’t not guarantee you succeed the raid with no effort. It make it easier on the mechanic sure but it also mean you are sacrificing dps.

Moring Hard has a had dps set in a few threshold and soft one after 20%. Taking chrono out of a single wizard mean sacrificing an aspect of your dps. Your party must be able to compensate.

It’s the same with taking 2 cleric strat for the Hard Moring, a strat that sacrifice dps potential for easier handling of some of the mechanic.

But yeah, it’s going to be fixed soon.

All the skill is supposed to do is stop a monster or, with the attribute, a boss (or self stop with another attribute).
That you have to disable the attribute that would normally make it work on bosses to begin with, while fighting versus a boss, makes quite clear this isn’t intended at all.
And debating if it’s an exploit when it makes players skip most mechanics is plain ridiculous. It even makes the raise circles without the follow-up skill, come on.
Without the mechanics this boss is just a glorified hp sponge, as long as you’re doing enough damage - and removing a single class from a player isn’t much of a sacrifice dps-wise anyway - and the gear is good enough, you’re done. The mechanics are the only hard things about it.
Lastly, comparing this with using two clerics is quite disingenuous. There you’re still playing within the limits of the encounter - revives do what they’re supposed to do, and nothing more, with the added cooldowns they’re supposed to have in such raids. This one is a completely different kind of situation.

I think this is history repeating itself once again
Do you guys remember when Murmillo’s headbutt and iirc a hackapell skill and maybe other skills used to do the same, cancel boss casting animations/effects. Also I remember FF’s bloodbath used to do the same to Velcoffer and it lasted for many months till IMC finally decided to fix.

party x use an “unintended effect of a skill, not written in the tooltip and not working as intended” (i.e a bug) to complete an end game raid and farm its drop.

in any normal game out there:

how it works on TOS:

welcome to the parallel universe of a dead game.

they are not using stop with attribute " stop: control boss monsters" and you told us stop has always been working on boss, wdf

Stop works only once if you use it with attribute " Stop: Control boss monster" which allows you to cast stop on boss for once only. In the video they used stop without the attribute and it affected boss every time. This is obviously a bug and not intended 100%.

back then alot of chronomancer use stop to prevent velcof flip. it also work with skia nuke and cancel his jump after lighting

Trick? tell me why you cannot abuse this anymore if it’s with attribute " stop: control boss monster then"?

which is 10second he will freeze

after that they just reset animate

then without attribute why boss is not stopped but got affected?
like you can use it without attribute to not stop mobs but ban their skills? no, they will be stopped.
this skill is simply working on mobs without attribute, and working on boss with attribute but for only once. everyone knows that I don’t know why you are still here trying to make up for these guys who abused the BUG

Chrono stop has its own attribute to make it work on boss, it’s not something compared with normal cc that can be dodged/resisted.
you guys know it and abused it and now you have to pretend that we are fools, no wonder SEA server has 30 clear team.