I have tagged the forum staff for this post.

I received a permanent ban from the game on the morning of Friday, May 29th.
I realize that you guys do not give details on causes for bans due to security reasons - I submitted two appeals through the ticket system and both times received an automated reply stating that it was verified that my account has used an exploit. If I did indeed break EULA which warrant a permanent ban from the game I would like my case to be reviewed and communicated by a staff member, an actual person - not your automated system and a copy/pasted response as I believe this was done in error.

As you can see by my rather embarrassing screenshots - I’ve spent a large amount of my time and my money on your game and being accused of cheating and banned with no explanation or response other than an answering machine is a bit insulting to me at this juncture.

I’m sure that everyone who is banned from the game has a similar story, that they did not knowingly use an exploit, third party program, etc. - However I implore you to check my account’s history/logs/messages before this decision is made final.

I am a player from Audra who began playing on February 12th of this year. I received a warning via the in-game-mail back on Audra for buying/selling a talisman for 89m silver. This transaction was between a fellow guild member and myself - the item was sold back and forth between us as a loan - no real money changed hands yet I was issued an RMT flag and warning, which I did not protest. Shortly afterwords I reviewed the game’s policies and have taken great care not to repeat this mistake.

In the weeks since the merge I have done nothing different than in previous months save for starting to engage in TBL more frequently and attempting to corner the market on several commodity-grade items. Klaipeda has an… interesting market atmosphere.

Please re-investigate my ban and have a flesh and blood staff member verify my alleged abuse before the decision is made final. The only form of transferring actual money that I have ever done in this game is by buying your Leticia gatcha boxes and selling the contents that I did not need over the market - which is not a violation. I have never run multiple accounts or funneled items from events, I have never used a bot/macro/third party program or exploit, I have never exchanged real money for in-game items outside of the TP shop, nor have I attempted to crash any channels to manipulate the RNG. The only things that I have done that could constitute abuse in the form of afk/harassment are getting up to use the restroom while queued for TBL/Dungeon Finder - of which I always return and let my party members know that I am back and sorry for the delay in my activity.

In regards to the market - anything that may have set off a flag can be explained; I have posted several armor pieces, rare/highly monopolized recipes, skill gems, etc. at higher than normal prices in the past few weeks that did not have a listing or price reference on the market, many of which did not sell unsurprisingly, several of them did. I.E. varna armor pieces with lower enhancement/potential values but at higher than the market-low as I suspected those were posted by gougers, or skill gems that wern’t on the market but exist for skills of the frequently played current meta classes - some of these between 10-20m silver, others for 30-40m - this isn’t something that is uncommon as if you observe the market there are a ton of skill gems such as Gung Ho, Guardian Saint, Mass Heal, etc. that get posted for these prices (I believe the ones I posted were for ranger/blossom blader/pyromancer - if this is indicative of abuse/RMT then that is an issue with your game’s market abuse detection).

I do not believe in and vehemently oppose the actions outlined in your EULA and do my best to report bots and suspect activity when I see it.

If you do indeed ban me, you’re removing one of the few remaining of your loyal and paying customer base unjustly.

I look forward to hearing from you and am prepared to accept your decision when I feel my case has actually been reviewed by a staff member.

According to our last updated RMT policy, https://treeofsavior.com/page/news/view.php?n=1679
We keep our eyes on the trades on server. However, There are also things take in to account when we watching on market. That is who he traded with. With the Gem you have sold, that’s all sold to the particular cluster of accounts which confirmed to be bot accounts.
And it is quite hard for me to judge that these bot accounts, bought the similar item from you on exact same date with slight different time line. With Relatively short amount of intervals between those silver transfer. And also I quite hard to judge this as a coincidence because there are two clusters of market trade made by same or similar bot confirmed accounts.

Also, their purchase of item is weird of choice as well, I don’t see any reason, even if we don’t consider this account as a bot account, that account who only have Necromancer in his account to purchase Sturtshau Gem and a stone shot gem.

So our decision will stays same, which is second strike with 14 days of temporary ban, with taking all illegal goods.

Thank you for your reply and your judgement.

So, if I am to understand your post in its entirety - My ban is temporary and will be removed after 15 days from the 29th of May - this suspension is due to the fact that some of the materials that I posted were purchased by suspect accounts.

RMT Should be permaban, 14 days isn’t an example. All guys can do RMT if it’s for transfer some billions. 14 days is nothing -_-

next time try another seller hahahahaha

@STAFF_Yuri
So, I maintain that I did not knowingly participate in RMT or break the EULA from my previous post, but accepted the judgement explained by STAFF_Yuri. I have been patient and opted not to feed the trolls who also responded.

I have not made a big deal about it and planned to move forward, waiting out my ban and being more careful about what I post on the market from now on.

Aside from the fact that I had items purchased (of which I had many auctions on multiple characters posted at the time) by a bot account - or cluster as it was explained, which I had no control over - I have not broken the rules to my knowledge - even having taken the time to explain the previous instance of mistaken RMT for which I was issued a warning and a strike (upon checking the logs and messages you should see that the other player and I know each other, were guilded, communicated about the transaction, and that no money changed hands, and the silver was traded back in full using the same item several days later - before the warning was even issued).

So I received notification today that my account is indeed permanently suspended.
This is the absolute worst experience and customer service that I have ever had in a live-service game. 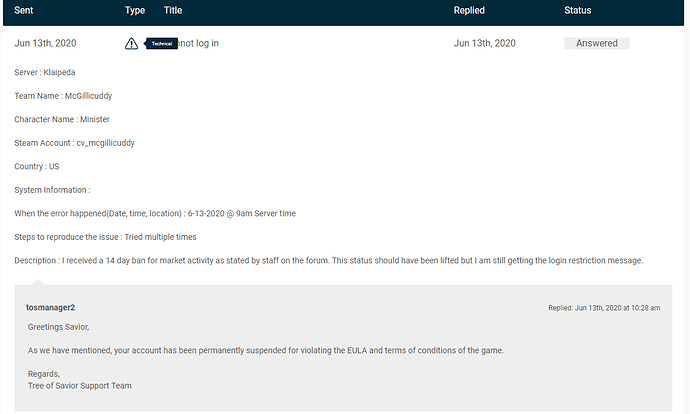 No thoughts or closure for this matter?

You are banned, that is the closure.

Can you please do the same to all bots running around Telsiai maps.
If that same bots user use the silver to gamble arch stone, it will ruin the game.
It’s not just he can get really rich easily, the market price of a lot of important items is ruined, new sandras, ichors, mystic tomes, ++ equipments, etc all directly or indirectly affected. More when we count that same bot accounts to get goddess blessed gems daily and new kedora boxes.

Compare to the amount of people who play normally, upgrade items rarely and doing emergency quests with abysmal sandra rate.

It only time until all the legit players left for good.

Ban or no ban if nothing else it speaks poorly of a company’s internal communication when after a supposed investigation by Staff who are directly communicating with a player cite their rules and the punishment handed down while the automated system has done something else.