We will investigate the reported account. Thank you for reporting.

Soooo Matrix, you accused Merchant Guild for being established botting guild. You got kicked from Infinite because of your toxic outburst in public chat. And now you are using MerchantCrow nickname?
Just wow

@GM_Francis, just thought you should know the full history.

kinda irrelevant. he still have prove, regardless of his relationship with whoever in the server. imo

Who cares about the full story? This guy’s caught botting with video evidence, nothing else matters.

Infinite botter on high position(recruiter). He is running guild events and sharing bot silver with guildmates for a very long time. I’ve reported about him to Phantasmagoria(leader of Infinity) in very first month when i joined infinite, obviously some of them were botting all this time and knew about him long time ago.

@devfrost44, what toxic outburst are you talking about? Infinite says they dont tolerate botters but you have botters inside your guild in high ranking. You kicked that botter that was posted in youtube right? Then why is your recruiter botter immune to kick?

Good Job recording this, I’ll be following this thread because I’d like to know how staff deals with “Real Player” bots. We have so many of these.

easy, they dont. looking at the track record recently. wonder what happened why they stopped banning bots.

Avon changed his name to Muffin to avoid ban? 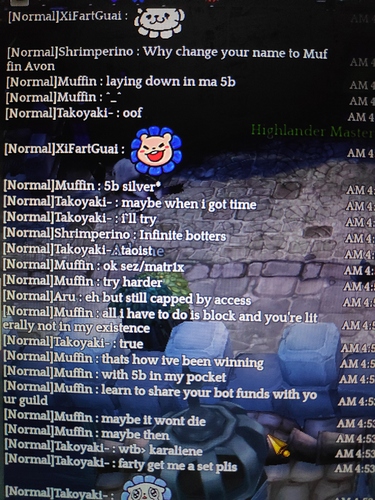 So after the guild kicked you out of the guild, you got sour and start taking your nonsense to forum again? From what i have heard, you are a botter yourself, and you go around flaming Telsiai players and taking your grudges against the whole guild itself. What a despicable guy. You were seen botting in baubas cave back in sigita dude so stop denying it. There are reports of you botting in baubas cave in this forum itself. You are the real despicable guy. Botting while you call other players botter. Accusing Merchant guild and some other guild as botters. Dont you feel ashame of yourself? The GM of the forum got so mad at your whining that they banned you from the forum, yet you shamelessly came back and start your jokes again. Piss off dude, learn to have some shame, and stop whining and acting like a joker. People, you can go and see the Matr1x’s gear. +21 varna shield from baubas cave. Tell me he is legit. HAHA.

Avon is still botting even if you accuse Matr1x of botting too. Two wrongs don’t make a right. Even if Matr1x has +21 varna shield just from Baubas Cave that’s not enough proof that he is botting. You know what’s enough proof? This video of Avon. Show a video of Matr1x doing the same then people would believe you.

The video doesn’t proof anything either. No question asked, no one replied to anything. Avon completed the flight of stairs a couple of times, the video doesn’t proof anything either. And anyway, I am not here to proof Matr1x is a botter or Avon is not a botter. I am here to inform everyone, how despicable can a player get. Matr1x accusation of Avon being a botter is well known in Infinite to my knowledge or at least from what i have heard. Why did he report only after he is kicked from the guild? Why didn’t he report Avon when he was still in the guild? As for Matr1x, Phanta warned him numerous times not to create a bad image for the guild for many times. Shouting and screaming like a kid in shout create a negative image for the guild. He deserve the kick. People, think twice before recruiting such players into your guild, don’t dig your own graves inviting a troublemaker.

Why are you guys targeting Matr1x?
He is not the reported botter in this thread.
Infinite = double standard guild.

Why are you trying to paint a bad image of Matr1x (without any proof). You are trying too hard to defend Infinite.
Did Infinite GM send you to do damage control?

So why are you here painting a bad reputation of Infinite? Infinite guild leader haven’t even taken any action doesn’t mean that he won’t take any action. Why are you in such a hurry to flame and paint a bad image of Infinite? Funny huh? Did Matr1x send you to cover him up for the childish actions he had done?

sorry, but are you stupid? asking for a friend…

That is a absolute proof you know? Just ban those who bot for silver. It’s destorying the game tbh.