Can’t find any information on the website about the Vakarine Package, so I’ll list down what the game says! 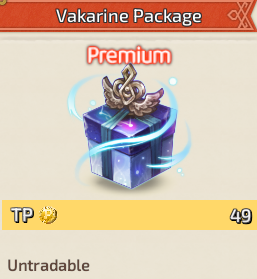 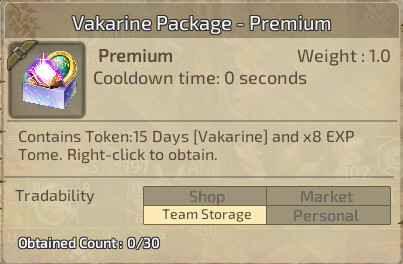 All Rewards from the Package 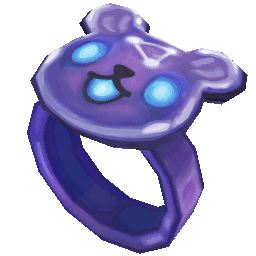 Anyone know how the TP[Event] work?

it’s similar to the TP you buy from Steam

We have confirmation of its existence now.

Greetings Saviors,   The following issues have come to our attention:   1. List of May ...

The TP [Event] is a consumable item. You right-click it to get 10 Premium TP. 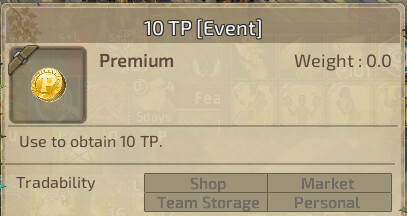 already try them, thank you

Wow
I’m not into p2w and I’m talking in perspective of company who try raking more money from players, not as players

Kudos to anyone who come up to implement this

This is nothing original in any other game especially mobiles, battle pass sort of thing, pay less gain more in time based
The dude with this idea might keen into mobile micro transactions scheme
I won’t be surprised if this idea stem from tos mobile progress and they make it arrive into pc as well

But the thing is they need to check how people sees the items provided
Most people like already mentioned above would care with the tp, gbc, armband and prob lastly 15 days token
While the rest of the items can be pretty much useless for many especially those who choose to focus one character per account or those with characters that already at max
Additionally level feels like a joke in this game with free jump and everything
Entering dungeon gives no interesting reward as well
If they actually change or improve the meaning of these items or in game feature relate to this item
It will break the second thought for those p2w or prospect p2w to actually buy this package
Even better change this with something actually more useful instead of just act like fodder
It doesn’t have to be that fancy, core items or anything, just something more useful than the infamous exp tomes

And probably next to it the value of the core bait which is 120 tp, what can you do with 120 tp, is there many interesting options interesting to spend it, Gambling is interesting for some but idk some people into login faithfully 30 days to get more tp just spend it it gambling and getting junks
It’s end up not worthed
There has to be more valuable option, even limited, even when players had to do another top up to reach that required tp amount