There is no reasonable scaling for solo content bosses regarding their stats when you can choose a difficulty setting. The stats are always high regardless which difficulty you choose, I think the entry level is way too high even with +16 equipment, it takes a long time to clear and you still get only a low portion of the maximum rewards.

In my opinion, the stats should be taken at highest difficulty and then divided by difficulty level, Tel Harsha at difficulty 1 should only have 1/7 of all the stats (including HP,defense,attack,critical resistance,evasion) that Tel Harsha stage 7 has (same with Moringponia stage 1 having only 1/5 of the stats of stage 5) so the entry level is low and newbies can start farming solo content early with reasonable difficulty levels.
Right now, they start and see all the solo content they cannot do every week and thus lose lots of potential loot.
With reasonable stat scaling that makes solo content a breeze, they can start beating the solo contents at lower difficulties easily, allowing them to stack materials right off the bat when they start, and begin tackling higher difficulties with higher stats when they get there.

Have to agree. My build may be strong but I did Tel Harsha stage 7 without vaivora/ark/kara, around 10min (reasonable time).
Moring solo is harder but it should be possible to do lower stage like 4 with that same gear.

IMC decided that you need at least 6 full Arch Stones 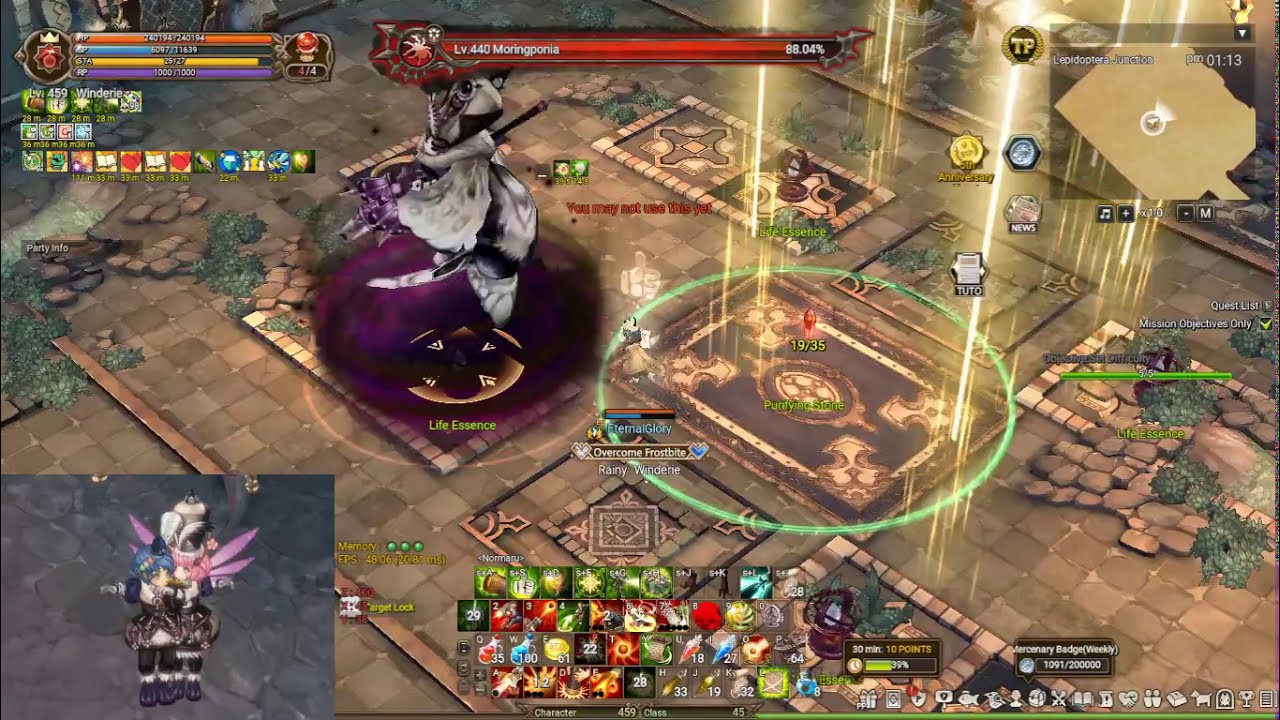 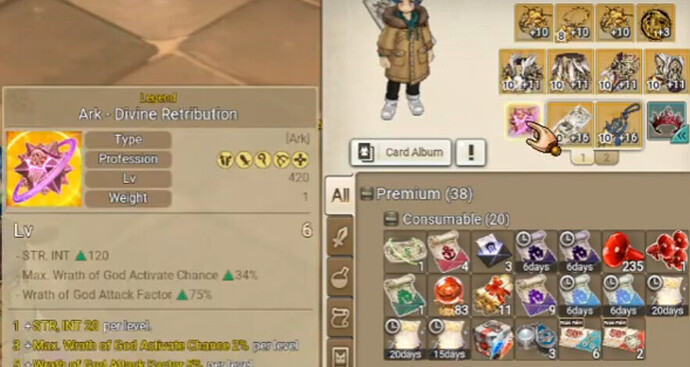 your comment doesn’t prove me wrong in this case.
Moringponia legend solo is content that is designed to be that hard, requiring you to deal so many hundreds of millions of damage, while the rewards are designed to be rewards you need for endgame equipment (like arch stone fragments).

If you need double vaivora +16 glacia legenda with extra damage from outer sources like legendary assisters, goddess retribution potions, that’s already bad enough,
but if you look at his gear, it contains 24 arch stone fragments (4 for the demon armor ichors and 2 full arch stones in the Ark).
Now imagine a new player using the episode 12 savinose dysnai gear attempting this content, would he even be able to clear stage 1?

In my opinion, the difficulty scaling should be such that you are able to clear stage 1 without any problems with the equipment you get free from doing the quests for all the solo contents, which is easily done by dividing the total stats by the difficulty setting (in case of Moringponia, all her stats would be 20% of what she has at stage 5 right now).
That allows players to participate in all contents that are solo entry only from the get-go, with reduced rewards, but allowing them to get accustomed with the content as they repeat them every week, at higher difficulty settings when they feel comfortable enough.

Let us look at Tel Harsha for example. Imagine you reach lv 440 in your first week of playing, you would theoretically be able to enter and collect up to three of his loot, and every lucifieri set requires hundreds of them later to craft, so every single one counts.
If his stats were divided by 7 on the lowest stage, you could even kill him with the free dysnai set and collect the 3 belongings every week until you have enough equipment to try higher stages.

Right now, even if you’re lucky to get the Arch stones, you’re gated here forever, unless you spend TP to buy sole hunt entry packages/leticias cubes to try and catch up with additional entries.
Progression is important, the places where you can make progress should be open to every player from the start so they can feel like they achieved something within the possibilities the game provides.
If the only option is solo, the clear should be possible with what the game gave you by clearing the main quest.

why is the guy who just reached lv440 in the first week think that if he can’t do the LITERALLY endgame content then he’s trash? Unless it’s the bunch of people who make 2nd account in seasonal server to grab all the good stuff. Most people would tell you to get all attribute to lv100 and a decent amount of art level. You would see your progression by seeing your skill hit stronger every time you do that, and by the time that’s done it’s already take a month or two, more than enough to have some gear.

Tel Harsha at difficulty 1 should only have 1/7 of all the stats (including HP,defense,attack,critical resistance,evasion) that Tel Harsha stage 7 has
…
Let us look at Tel Harsha for example. Imagine you reach lv 440 in your first week of playing, you would theoretically be able to enter and collect up to three of his loot, and every lucifieri set requires hundreds of them later to craft, so every single one counts.

Tel Harsha is a special case, since you can complete this with a naked cleric using level 440+ assisters.

That’s my problem. My mains (pyro or crusy) have a strong build (full level 430, set, decent accessories, maxed attributes, vaivora, even full overload ichors on the crusy…), even if I don’t have ark/karaliene, still I can’t do Tel Harsha or any of the solo legend raids (I even struggle with Skia solo that’s how bad I am) at… level 1! Same with WBR – people with similar ranks in Bernice do ten/twenty times more damage for a reason I still don’t understand. It simply seems the chars do zero damage in those raids. There must be an obvious reason, but still didn’t find it yet…

On contrary, it does prove you dont need at least 6 full arch stone to beat solo content bosses, there, 2 complain thread beaten by 1 video

You are coming to a point where every progress comes to a halt because of the wall of the arch stones. Leaving aside the demon/goddess sets, you cannot craft an ark with just 2 arch stone fragments and then requiring additional 2 fragments per stage you upgrade the ark.

Again, progression is important, because these contents have a chance at dropping arch stone fragments you need to progress with your equipment. If you cannot complete them,you’re missing out on a weeks worth of materials and the chance to get a fragment. Over the weeks you play, this accumulates, and by the time you can tackle that content, you might’ve lost dozens to hundreds of chances, depending on the intensity/time spent on this game.

I believe that solo content should be open to everyone with reasonable equipment status (which is the one you get for completing the role play portion of the game, the main quest) and the difficulty should scale with the amount of loot you gain, significantly lower loot should also mean significantly lower entry&clear requirements.

The only other reasonable solution is to make all entries come via non-timed entry vouchers from the badge shop and then you could stack entries until you’re ready for them.

I never wrote that you need the 6 arch stones for endgame content.

and IMC never wrote “IMC decided that you need at least 6 full Arch Stones” too. Also you 如月, never wrote that 6 full arch stones is for endgame gear in my quoted text too. 抓牛角尖?

Why do you still need end game gear if you already can beat end game content without it? to brag in shout? It is just you driven by your own ego to get all lv 3 goddess ichor lv 4 monk vaivora without “normal” effort.

I’m curious, why dont you directly wrote your suggestion to ktos HQ? Knowing full well that itos cant even alter event reward, you still wrote here hoping itos can fulfill your suggestion better than ktos? You are basically suggesting at empty wind here. Even itos staff doesnt reply to your thread like other’s thread suggestion…

Now imagine a new player using the episode 12 savinose dysnai gear attempting this content, would he even be able to clear stage 1?

I can imagine if you become IMC president, tos server wont hold very long because casual F2P player can complete end game gear with ease and patience, no need to struggle with the next spike difficulty. And because it is easy to complete endgame gear, they want newer content faster, ergo you as developer will have tighter deadline, rinse and repeat until you cant catchup to player’s speed at completing new content and players leave game because everything is easy, boring and not challenging anymore.

And how do you think there are some high geared endgame players? are they existed out of nowhere? Or do they start the same as every newbies but instead of becoming keyboard warrior complaining at forum, they use their time wisely perfecting their own gameplay strive to be the best?

A sw in tels cleared Tel Harsha with varna… not even in top 3 guild.

If the player I still in F2P mode… idk, why still play demo mode…?