Skia solo as an Healer

I made this video to showcase how an Healer is able to solo Skiaclipse solo. If you have a DPS, you’re better of doing it with your DPS. In my case, I find DPS classes boring so I end-up doing the contents as an Healer. I’ve seen a few people who think the same way and don’t nor invest in a DPS so I made this video to share and explain how it’s done. The title and description is in Brazilian Portuguese because I have a facebook page and content for the Brazilian community but I’ll translate my guide here.

The first phase is simple. Keep the summoned monsters away from Skiaclipse while spamming Twist of Fate. You can spam your attacking skills as well before the monsters spam and use your basic attack with your Twist of fate but, after the monsters spam, you won’t be able to deal much damage except with Twist of fate.

On the second phase, keep spamming Twist of Fate while attacking but keep an eye on Skiaclipse’s health. Once it reachs 80%, 50% or 20%, it will activate his wipe skill. You have 3 options to survive it. They are:

If there is no Statue, Torch or Capella, Skiaclipse won’t cast its wipe and you will be safe. Just remenber to wait for Skiaclipse to attack before casting your Twist of Fate to trigger its wipe. It will start the cast after the previous animation so it gives you time to cast Fade and wait.

While Fighting, keep an eye to the tornados, it Spams at 35%, 25% and 15%. If Skiaclipse ge catch in it, it will get buffed and may one-hit kill you. You can destroy the Tornado with Counter Spell ou by being hit by it.

Have a good day, everyone. 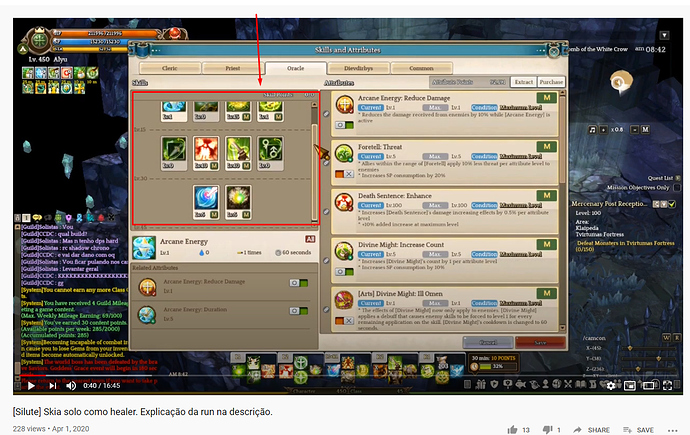 I’m curious, how come you have 47 skill points here? I’m not mistaking something, am I?
1 Arcane Energy
15 Counter Spell
1 Prophecy
10 Death Sentence
10 Divine Might
5 Foretell
5 Twist of Fate

how come you have 47 skill points

We get 3 Skill points from Lv440 to Lv450. Can spend them on any (not maxed) skill.
Talk to Magic Association NPC in towns

Oh, I see. Thank you guys for answering.

How do you make fate not healing the boss?

Nothing, it doesn’t heal some bosses, like Skia legend.

Ohhh i didnt know, thanks for your reply, do you know if there is a list with those bosses?

As far as I know, all legend bosses, Weekly Bosses and Misrus don’t get healed.