Okay, I think is is something a lot of people having trouble understanding, me included.

I have no ideia why should I even bother leveling up Bunshin no Jutsu skill after level 3 or Mokuton no Jutsu after level 1. Seriously, raising those skills any further in the CURRENT update is just stupid and a waste of skill points. It doesn’t add nothing to the skill at all. Either way, I don’t know if the in game skill text was translated wrong or something but it is just pathetic.

2 - Almost the same thing happens to Mokuton no Jutsu. The skill level goes all the way to 15 and all it does is just increase the duration of the skill activation to a max of 90 seconds. No increase in the damage. No increase in how may times you can activate the skill before it enters cooldown. No decrease in cooldown time. No other a temporary effects like an Evasion stat increase or Cloaking buff. NOTHING. It does’t even decrease SP cost. WHY SHOULD I BOTHER RAISING THE DURATION OF THE SKILL IF I CAN SIMPLE PRESS THE BUTTON JUST RIGHT BEFORE TAKING THE HIT???

THIS DOESN’T MAKE ANY SENSE AT ALL. Raising Bunshin no Jutsu above level 3 will literally just increase its nerf effects. 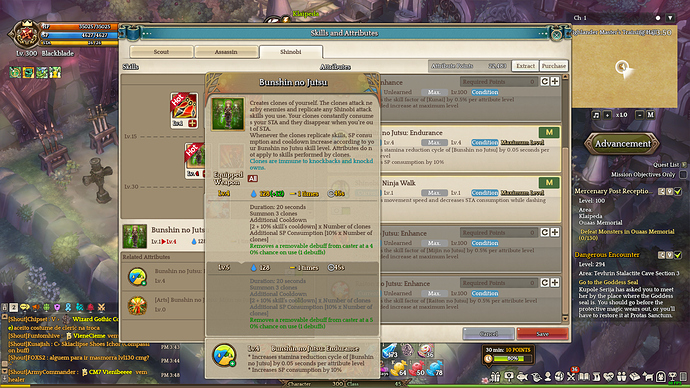 Clones actually do 10% damage per skill level which means at level 3 theyre only doing 30% of the damage.
The tooltip is missing this information in the current english version.

You have to max bushin so that clones do the proper 100% of the damage.

As for Mokuton It is as bad as you suggest. It is entirely a 0 or 1 pointer.

It says attibutes do not apply to [skills] perfomed by the clones, so the skill modifiers won’t affect their damage at all. Which means their damage is a fix number? Or is it still based on a variable value? I still didn’t get it though.

From what source of damage this 100% will be calculated? The clones has a base damage value at LV1 and it will be 200% of this value at LV10? Or is it 100% of my current equipment damage value?

My tests were made without any equipped gear because I was using my class change points to reset the build. I really didn’t noticed any variation in the damage between LV1 and LV10 and the fluctuation of criticals cannot be taken into account. Those skill texts really should have properly been translated.

Their damage is straight based on the skill factor of your move before attributes are applied.
If you have 40 in enhance, or 100, or 20 arts levels, it doesn’t matter, they don’t factor it.

Clones also aren’t affected by your buffs, but they will consider debuffs on enemies (this also means they eat your Joint penalty hit counts Q_Q but they dont benefit from the Joint Penalty; Chain Heart [ARTS]. So things like Rogues Pierce buff works for the clones damage skills.

I believe the Clones Mijin [ARTS] will hit for your true SFR (counting attributes) when you let it activate by itself, so as long as you dont use Mijin while you have clones, you’ll get proper SFR from it if you have the Arts enabled.
Effectively, Kunai and Mijin can match your damage with Attributes, Raiton and Katon cannot.

None of them count for buffs so you will still hit harder than the clones if you have any buffs (Brutality for example).

So it is not a waste then. But still, at LV10 SP consuptiom rate will be insane if you play spamming all your skills with clones on. Either way I guess you won’t be needing to use your skills more than once to clean most of the mobs anyways. But the longer cooldwns can indeed be an issue, especially in long fights like the challenge rooms.

I’ve thought Joint Penalty: Chain Heart worked as a debuff and thus amplified the damage from clones as well. Now I’m in doubt, but it’d be hard for me to believe JP:CH was causing such an intense bursting spike with my damage alone.

Is worth getting shinobi now? Is this class strong? I wanna build one, but I don’t wanna waste my vaivoira coins with an underwhelming and underpowered class.

[ I’m not talking negatively about the class nor criticizing, I’m just asking if this class is strong]

It does not. I know cus I have a Shinobi-Ardito-Linker (Q_Q).
As per this post I just went in and tested on West Jungers field.
Process.

Chain heart itself says it only applies for the caster. You are the caster, but your Bushins despite coming from you, do not consider it.

AFAIK if you want to boost the clone damage you can a) Electric Shock (because it will reduce enemy defense)
b) Use Impale dagger, as the bullseye buff increases the damage.
I did have a Sin-Shino-Rogue, but I honestly disliked it.

The entire gimmick of the class relies on Bushins which last 20s (although this matters less than it seems.)

As an example of why the class depends on bushins.
Raiton is 2831 *3 overheats over 25s.
That’s 8493/25 for 340 SFR a sec. The other skills aren’t different in this, they’re all actually low SFR.
However with Bushins…
Raiton is 2831 * 3 overheats * 4 attackers (you, and 3 clones)
33972 / 38.5 for 882 SFR a sec. Which is well far better. Basically outside of Bushin Shinobi skills are generally bad. You can go through the whole shinobi burst window about 4/5 seconds. Which leaves a lot of downtime. The burst is good, but if you dont have classes to fill up basically 35s of downtime, you will be left auto attacking a lot.

Well to answer your question. Shinobi’s burst damage is alright, but as an overall class it isn’t strong.
It’s like Doppel (who also kinda operates around 45s windows) without all the power or synergy (given that clones ignore buffs).
There’s a lot of power in the Hallucination Smoke + Mijin no jitsu combo effect, which kinda forces Assassin on you.