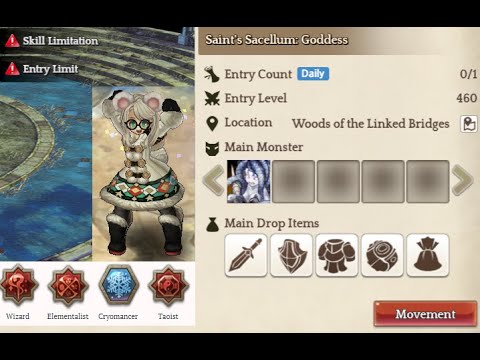 Video showcasing how to play as a mid ranged or secondary dps in the Saint’s Sacellum raid, otherwise known as Snake Raid.

Generally meant as a guide for ranged dps, but other player types might also benefit from the change in view points and positioning of other party members.

Vasilia starts off with 5 stacks of the “Enchanted Scale” buff which lets her take less damage, making it hard to kill her.

You generally want to do the mirrors at the start of the raid in order to remove the defense buff.

Decide amongst your own party members on who picks up Tyronas Spear when shes going to cast “You Can’t Escape” in order to avoid raid wiping.

After the 3rd spear pick up, you can decide to save some time and skip the last 2 spear pick ups. This will make you take a high amount of damage instead of raid wiping you, which means its worth it.

Phase 2 starts when Vasillia successfully casts “You Can’t Escape”. She will petrify everyone and remove all your buffs and then deal damage or wiping your partyt(if you didnt do the previous mechanic correctly)

When Phase 2 starts, she usually spear charges right away. so position as the furthest party member and behind a mirror.

Vasilia’s Spear Charge targets the furthest party member from her. You can take advantage of this by constantly being the furthest player from her the entire raid while you lure her around to break mirrors.

Breaking the mirrors are the hidden gimmick which will remove her “Enchanted Scale” defense buff permanently. Once you break all the mirrors correctly, then she will be vulnerable to full damage the entire rest of the raid.

Mirrors have 2 hp and each spear charge deals 1 damage to the mirror.
The 2nd hit on the mirror will need the mirror to be in the count down phase in order to properly remove Vasilia’s defense buff permanently.
(This means the mirror has to be showing a number counting down when it is hit for the 2nd time for it to work correctly).

Once you have broken all the mirrors, it is basically the exact same as the auto:match version but easier as you no longer need to turn mirrors.

As the furthest player from the boss, you will be the target of Vasilia’s Spear Charge. You can actually cancel the charges once all the mirrors are broken by using the appropriate movement skill/iframe. (In the video, i am playing the wizard class, so i am using the “Teleportation” spell to do this.)

Canceling the charges will keep Vasilia in place, making it easier for your party to damage her.

This means you will need to position well and also keep your distance from the boss for the rest of the raid.

As the secondary DPS or the Spear Charge target, your(my) job is positioning and mechanics > dealing damage. This means that you(i) will likely not be dealing as much dps as the other dpsers in the party.

Goddess Equipment+16 or so should be enough to clear the raid as long as you do the mechanics correctly and position well. It is pretty much the same as auto:match for most of the time.

Vasilia does mainly physical damage or true damage, so you will want to use zaura cards for physical defense.