i gotta say, tos mercenary mission that act like daily quest board is really really not appealing
the reward. the no ui, well almost every aspect
but thats ok it means there is room for improvement
and this is my idea

there is no UI for board mission, and thats too bad
UI will actually make board mission have some feeling to it 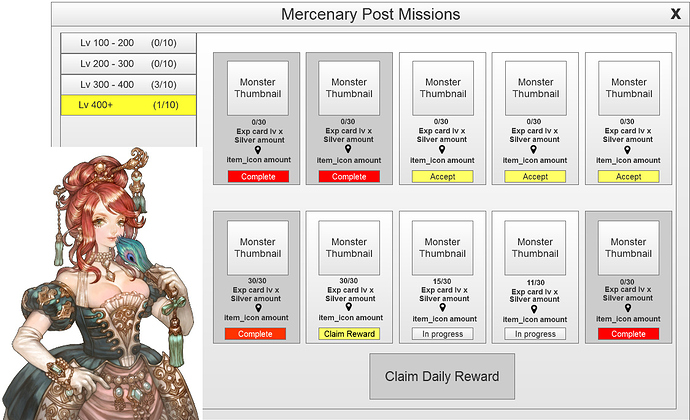 also add in game resource as reward to attract players.
here are the list of item that i suggest to be added as mission reward:

some items can have increased amount according to cluster, some others can have fixed amount due to its higher rarity or to manage the dailies amount we can get to prevent obsess reward for example boruta seal frag appear rarely as reward and fixed to 1 in each cluster

on top of it, there is daily reward which suppose to provide even more appealing items. as we all know that we love RNG so much

i suggest to create loot box called mercenary post mysterious cube which can be used to receive 1 of following item by chance:

at the very best, player can expect blessed gem as reward with highest drop rate much like 45 mercenary badge from kedoran merchant alliance box.

about reward tradability, i suggest to make all the rewards become untradable to prevent channeling reward.including blessed gems.

take notes, the reward here especially blessed gem must make sense in term of time vs reward. lets say it takes 20 minutes to complete all missions and in that timeframe someone can get around 3 million by doing 3 cm rotation. thats somewhat worth 3 blessed gem. therefore the worst case reward, in this case blessed gem, must be at an appealing amount. 3 is wow, 2 is fair, 1 is.. i dont think so.

some current daily mission require you to kill 150 mobs. thats just too much. people get terrified by the huge sum plus the fact that its repetitive. of course with CM or doing it in party this can be an easy task but thats not always be the case. most of times we do it as solo and in early level, killing huge sum of mobs that spawn rates really bad is super annoying.
therefore an adjustment of how much the amount of monster need to kill is needed.
i would say 30 is just the perfect amount, in every mission, in every cluster. choose mobs with good spawn rate as well. this is important to balance the time vs reward factor.

this feature also need to align with another game feature/event like:

fedimian act like lv 100+ milestone which is perfect to introduce mercenary mission and the biggest reason is because fedimian tavern has the perfect vibe of mission board basecamp instead of current basecamp which makes rota and the gangs like some refugees.

Ahhh couldnt agree more with you mate, those are all really good suggestions, i wish IMC would listen to this kind of feedback

And honestly, a lot of things in this game need a revamp, lvl dungeons, mercenary missions, fishing, collections, pretty much every map from episode 1 to 11, even Uphill, hell, id say bring back Saalus, thing is, the game rally needs something else to do (thats worth the time) at late game, other than CM and legend raids, not that i dont enjoy those, but it would be nice to have more options

i will come with my idea for fishing too. honestly even the latest personal hosing feels a little bland.

Interesting ideas, remember to send a ticket too(it can be a resume of the ideas plus referencing to your post), they usually don’t go actively search for ideas on the Forum.(I could be wrong)

Woaah, i even forgot about that, havent been in there since it came out lol i wish there was any incentive to use it at all other than to take some screenshots, maybe having npcs or something