This whole thing wouldnt have been so bad if they would of given LA a separate server and then region locked them. Now everyone else is having to deal with this BS.

You know how god damn hard it is to play a healer when you don’t know Portuguese?

I don’t always know the language of my party members either, whichever it may be, but I’ve been able to play perfectly fine and figure out the context of what they’re trying to say usually and even if I don’t fully understand it’s not doom.

I’ve had fields of mobs KS’ed in front of me because I spoke english. I’ve been denied groups because I speak English. Both on English servers.

KS happens to everyone. You don’t need to bother finding groups because there’s dungeon finder. Yeah sometimes it’s a little random but you are always guaranteed to have people to play with.

Also they DID inform you. Check out tzxazrael’s post in this thread on the various announcments IMC gave to inform you all. So it’s your mistake that you have to deal with. Nothing is stopping you from creating a new team in Klai and remaking.

Now everyone else is having to deal with this BS.

Yes, especially those poor ones who are allergic to Portuguese and Spanish. They get physical life threatening symptoms when they read something written in those languages if they don’t have expensive special filters installed on their monitors

Because of this, no one should even bother thinking how these damned LA players have to deal with the BS of monolingual racists throwing at them left and right.

God forbid we want to play only with people we can understand. Take your liberal multiculturalism elsewhere.

Either stay racist and do it like a man or stop it all together. Don’t go around making racist suggestions and then claiming not being a narrow minded racist yourself. Language barriers are one thing, calling it BS when people speak other languages and wishing region locks on them is another, and this behaviour clearly has racist motives behind it.

how is that racist? Do you know that Brazil is made up of many races and not just hispanic/latin? Are you retarded?

Seriously shut up. If anything it helps relegate population, language barriers and server stability. Having specific servers for specific parts of the world isnt racist. If everyone all over the world dogpiled onto one server OF COURSE you will have problems.

But no, you want to run around and scream “HE IS BEING RACIST”.

They didn’t post anything on the steam forums Raven. Most of us only came here to these forums when someone told us about them.

Also Nyypa you’re using that term wrong. It’s not racist. It had nothing to do with the color of their skin.

I’ve been targeted and harassed by non English speaking players on the localized english translated server because I didn’t speak Portuguese.

I put a ticket in wanting to get away from that harassment and be moves. Only to have that ticket never replied to and learn that the founders transfers are only to EU and SEA. That’s pretty fked honestly.

Also you cant be racist against a country. Use the word correctly ffs.

You see the failure in logic there right?

Watch out, you will be racist for that kind of thinking! In this multicultural day and age if you think like that you will be sent to a sensitivity camp and reformed to fit in line with this cultural marxism!

As for Team Names, they have offered a free Team Name change, and there’s already another one scheduled. That’s more than enough to make up for their so-called entirely wrong FAQ.

Please no, i have lots of NA friends i prefer playing with.

That’s reasonable, then. Still wondering why you’d make a team on Orsha yet not create a character if you thought, erroneously, that team names were server specific. Or why you wouldn’t play anyway if you were expecting a transfer.

I didn’t want to have a negative experience on Orsha

or to play without my friends

Have you sent in a ticket to have your team deleted? I suppose you could spend the TP to rename your team, then create it on the correct server. Though I can only confirm that characters’ first names free up after deletion, since I’ve never changed nor deleted my team before.

um , there was a team name changing event , you could have changed your team name in orsha and get your desire name in klaipeda o-o …

Yeah, I saw the deletion thing. But I would have had to stay on top of this super intensely until the names were wiped to get my name back. I just wanted to go with a safe transfer. Also, after the launch delays and whatnot, I wasn’t exactly super confident that the names would even by wiped at the time they said they would be. Thanks for understanding

As for Team Names, they have offered a free Team Name change, and there’s already another one scheduled. That’s more than enough to make up for their so-called entirely wrong FAQ.

Whatever you say, troll.

I’m actually going to respond to this, because I think it’s hilarious how stupid some people can be. Ok, here we go!

Klaipeda was available from the get-go? Cool story. I’m pretty sure most of us thought Klaipeda was super dead for the first day. It was also the server you had to wait for five minutes without any indication to log in to. (Once that method was discovered). A lot of us thought it was dead.

As for Team Names, they have offered a free Team Name change, and there’s already another one scheduled.

Yeah, they change your name, supposedly with a maintenance, and you get to scramble back and hope you get your name back. Sounds great. Except not. I’ve waited this long for the transfer rounds; may as well wait a little longer.

That’s more than enough to make up for their so-called entirely wrong FAQ. 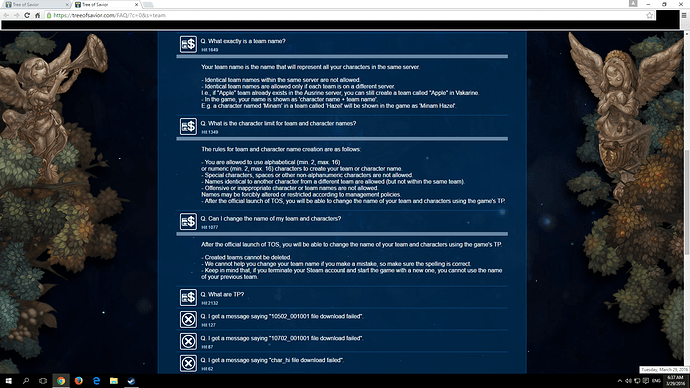 Spoilers: I wasn’t up at 6:37am because I was having such a fun time playing the game.

So-called by who? Me? Where did I ever say that again? That sounds pretty dubious. In super-villain territory, even.

it’s even under the heading of [Transition to F2P and Additional Worlds]. you can’t just pick out only the details you -want- to apply to the situation.

Is it really that hard to comprehend? Really? I don’t want to assume that you’re stupid, but I honestly don’t really know how to make it any easier for you to understand.

You do know that making up a quote and slapping quotation marks around it doesn’t actually make it a legitimate quote, right?

It’s not how that works. Neither of your two quotes are in that article.

Current Plans Regarding the Transition to F2P - UPDATED March 28th

[Transition to F2P and Additional Worlds]

As we have previously announced, we are planning on creating new worlds if there is a sufficient influx of new players when the game releases to the mass public.

However, we will not be creating new worlds immediately upon release. We are planning on opening them gradually in accordance to the influx of new players.

We are aware that the number of players per world is extremely important to an MMORPG and do not want the population divided. Players on the Founder’s servers may feel like they are being penalized if the new worlds are immediately opened and all the new players go to those servers.

We will be offering 1-time Team transfers to those who purchased Founder’s Server : Exclusive Access.Only 1 Team transfer per Steam account will be allowed regardless of the number of products purchased.

We will be taking requests from those who would like to make a Team transfer once new worlds open. The transfers will happen approximately 3 weeks after the new worlds are created in order to ensure that some of the head-start effects brought by older players are reduced.

It’s not how that works. Neither of your two quotes are in that article.

my apologies. i was trying to summarize it for you, since you seem to have trouble following what they wrote.

Please refer to this thread I had made regarding Orsha to Klaipeda transfers and support me!

Greetings IMC and forum. I'm going to get straight to the point. Like many others I've payed/bought the exclusive access to the English version of ToS. Not only that but I also attended the last two closed betas, submitted bug reports aswell as generally play this game. In other words, I have supported this game ever since the closed beta launches, back when the game was almost unplayable. I didn't care because that's what a beta is for. To figure out what can be done better, and to make it …

@UnLuckyCat We still have one more free transfer to offer the founders, which is the transfer provided when the game goes F2P, unless that changed without my knowledge.

The specifics are unclear to me now that we’ve got regional servers, but based on IMC’s claims all four teams are hypothetically able to transfer.

The “all four teams” refers to my post in that thread where I gave examples of switching between various servers, including someone who transfers this week. So at the very least, you and your friends can transfer to a new server together, for free, even if transferring between Orsha and Klaipeda is not possible.

REALLY wish they would let us transfer OFF the Orsha to Kal. Getting Tired of being stuck on the BR server.