Looking for performance gaps on classes

Since the goddess gear’s introduction to mitigate scout dual-wield funding issues, I’ve contemplated trying to do some sort of dual wield but not feeling too 100% about it. A lot of the skill planners I’ve been using are outdated so skill ratios have been very hard for me to calculate, and these are typically without vaivora applied anyway.

Does anyone have CM vs. boss differences and what makes a core build deal a certain amount of damage? I’m not looking for a math wiz, just a performance gap so I can better understand if a build is reliant on a certain class to properly work.

By dual wield you mean to say dagger+pistol? Unfortunately, if you wan’t to maximize damage output, that won’t work anymore. The very essential buffs that alot of Scout classes use have been made to only work if you’re equipping the same type of main weapon in each slot. But, the patch also opened up plenty of possible, fun builds. Check the WBR rankings for scout and check their builds. More or less they are all equal in terms of damage output, but have different gear scores. Of course how you play also matters.

You will most likely find:
Assassin/rogue/clown

And some Schwartzer Reiter builds

SR too expensive. I’m already aware of BM builds cause they’re top of the charts typically, especially the linker one.

However I don’t really care about WBR. As I said already the point is to have some analysis on class differences since there haven’t been any deep dives on it in years. Granted, I’ve never gotten the answers I wanted in megaphones for the last 4 years so I thought I’d try here since most of the sourced info I use came from people’s links in here.

The only double weapon class that I think performs really well right now is Ardito + Sheriff + X (X is mostly Assassin, but Linker or Corsair are also possible), but it is an expensive combination because it is only effective if you have channel set and double vaivoras lv4, because both their vaivoras at level 4 improve their channel skills by +100% final damage (ardito > taglio, and sheriff > fanning), so using channel set makes them really strong.

I see. Usually people here would ask for advice on specific builds they have in mind, go through trial runs and then ask some more. Maybe start with that if your aim is to find the dual-wielder suited fot you. Usually people here who are experienced enough with playing scout will give you more than enough details to better understand skill synergies and gears. It would help if you could tell us a build you already have in mind and what class inside the build would you want it to be compared to. It should narrow it down to the answers you’re looking for, as i believe a detailed analysis of the whole scout tree is unnecessary as some class combos just doesn’t work with each other.

The issue is that most of the builds I’ve tried across the last year or so have been extremely reliant on consistent cooldowns. Let’s say I play Outlaw for example that until recently has had one of the worst PvE balance streaks. There is no class combination that makes Outlaw perform because Outlaw is not the reason that the entire build performs. Now Outrage passes 30k% easily before attributes and gets a Vaivora.

Things are way different at the moment because they’ve pushed for power creep to deal with lack of variety. Yet realistically builds still only perform if they have some form of consistent damage. I’ve tried Bokor/Warlock/FF, and the thing had CDs that were way too long even for boss fighting standards. Even if I wanted to be creative, the build itself just runs out of gas, plain and simple. That’s not fun when you’re doing any content regardless of CM or bossing, because none of your cooldowns will ever consistently be up. Not to mention Infernal and Shadow Pool not being there which outperform as long as I give up a non-Bokor class.

Anyway I want to avoid that issue for Scout builds because the trap of overfocusing burst is still evidently in the game. A detailed analysis is never necessary, but it helps the rest of the community who google or come back to topics like these. I’m avoiding SR because quite literally I’ve only ever used it for lazy farming, and now there’s some gear barriers to that which defeats the purpose of why I used it. Otherwise I’ve quite literally played everything at the lowest gear standards and haven’t limit tested anything for endgame efficiency (cost was the biggest barrier by far).

Then go Linker/Sheriff and you will never have to worry about cooldowns again. A level 1 Sheriff Vaivora is enough for this build to work. Peacemaker is quite powerful now, 19k%x5 and you’re gonna be spamming that a lot. Joint penalty+peacemaker is notorious for 1 hitting tanky mobs. It is quite decent as well with bosses because of Linker’s broken lifesteal.
The heart of the build is Linker and Sheriff, the 3rd one, whatever you want.

Peacemaker is quite powerful now, 19k%x5

I have that, lvl 12 peacemaker. 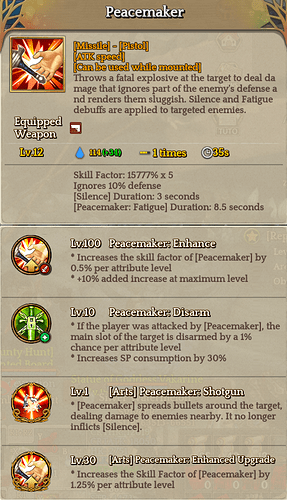 Did run some numbers with speedloader but linker definitely handles the budget side and isn’t super weapon reliant (it would defeat the purpose). Only dual wield options I was considering were ardito, rangda and shinobi, the first two because of storm ark and the shinobi because I’ve been trying very hard to make the damn thing function somehow without receiving the CD issue I stated already.

Will be going Sheriff/Link/Outlaw for now and think about swapping Outlaw later.

Yeah, I totally understand… I’m in the same boat. Started out as Assassin / Shinobi + Thauma for buffs. Switched to Enchanter, which I do like better than Thauma, but it’s just as you said.
You Bunshin and then blow through all 3 Overheats on Kunai, Katon and Raiton instantly. Mijin and Annihilation both have relatively long CDs with the single OH. I’m left with Behead at 2 OH and either 2 uses of Instant Acceleration or 1 of Piercing Heart and then I’ve got like 15-20 sec before Bunshin and Shinobi skills come back up - during which I’m stick trying to spam that Lvl 4 Dagger Slash.
At the moment I’m considering switching Enchanter to Ardito, just so I have the additional attack skills to work with. The other option would be Clown, but I prefer the playstyle of Ardito more. Either way, I’ll be losing the buffs from Enchanter. I guess the Accuracy and Block Pen might not be that much of an issue and I already have other skills boosting crit, but I’ll be losing 1668 Ark from Over-Reinforce (plus the 10% to Phys & Mag Def from the Arts Attribute). I guess it will all depend on if the additional skill uptime will outweigh the buffs in the total damage output. Not having that Agility buff for the Move Spd is going to hurt my feelings though. As a ninja, I need to be fast as sh*t.