Bump. Any news on this?

This is intentional and probably not going to change. Having a low chance to get the good stats (attack) gives worth to awakening stones and abrasives. If it was easy to get your awakenings, they would have minimal value.

The change to additional damage was never intended to make awakening your items easier, as all the stats were in the pool even before to simply dilute it, making it more difficult to get the good stats. IMC themselves know that both before and now, those stats are less desirable.

They had to change the awakening results as a part of making the additional damage changes so it wouldn’t give the old stats, so they already purposefully made this decision.

how do you know it’s intentional, did you spoke with any GM or did they posted it in one of those ktos montly q&a

They had to manually change the mod pools in order to implement the additional damage changes, which means they did it intentionally.

What they’re doing is counter-productive to what you’re claiming their intention is. If they wanted to make awakenings and abrasives more valuable, it would be a better idea to NOT dilute the pool and just give away less of the awakening stones and abrasives instead.

Doing that would make these more valuable and actually worth considering: 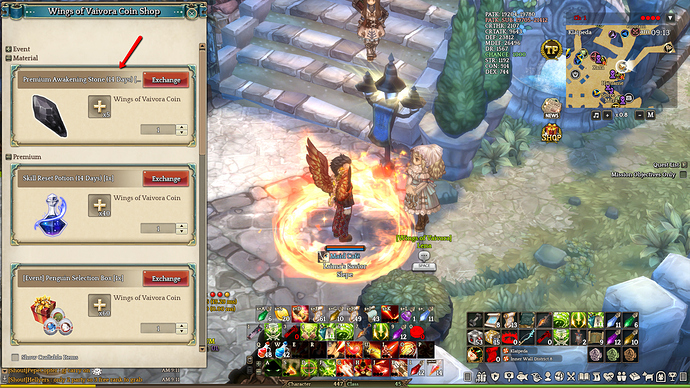 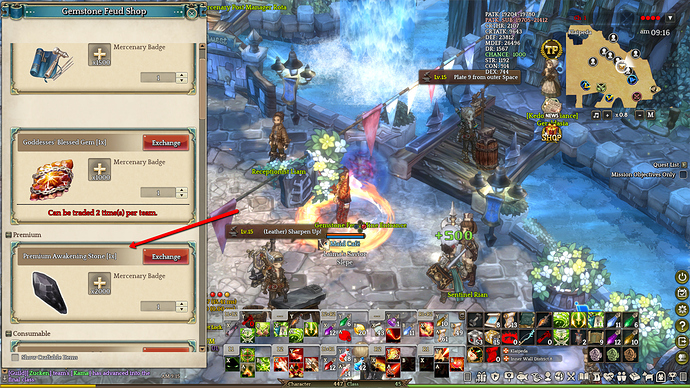 As it stands, with your claim, these things are NOT worth getting BECAUSE they’re not valuable at the moment. So is this: 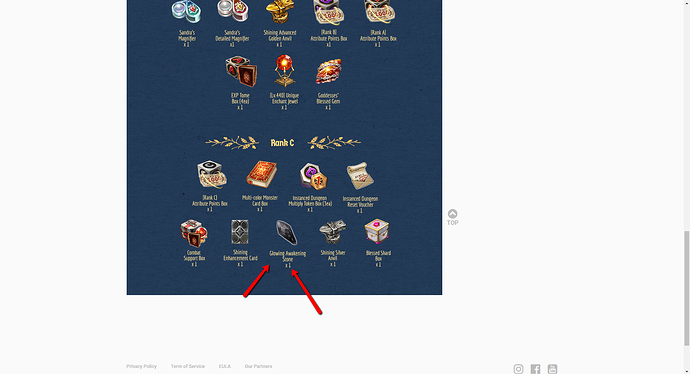 They have been fairly abundant through events, fishing, and TP packages in the past. As is, you can already buy awakening stones in large quantity at only 500,000 silver each (on Klaipeda at least):

There’s more than this too at slightly higher prices.

Changing the good stats (ATK, HP) to be more common but not changing how many awakening stones you receive from content would simply decrease their worth. People get what they need to achieve the stats they desire on their equipment, then don’t need any more.

In addition, KR changes have already made it even easier to get awakening stones. We will be receiving those changes too in due time.

That’s why I said to decrease the amount of awakning stones they give away.

Also, this “awakening pool intentional dilution” doesn’t apply to armors. So, I still have a strong case here questioning whether or not it’s truly intentional.

i dont get your logic at all lol, and i bet many will agree with me including crevox who might cofused too lol

just because the awakening stone is cheap its not valuable?and so the awakening pool? lol
awakening RNG is worse than anviling
you dont know how much awakening stone i used to get matk 200ish++ when i mostly get patk and any other goodies that i would want to transfer because awakening transfer wasnt exist back in the day so i just rewrite it with new one
the awakening stone price per item might be cheap for some but to get the stat we desired,plus the value we desired it cost a lot of awakening stone, just like rerolling best value stat for random gear.although random gear reroll is easier because its a separated process between stat and value.though the price are likely the same
and yeah just because its cheaper doesnt mean awakening result is cheap.the other day i got 80 evasion which worth more than lv 10 green gem
the thing is, its an RNG thats even worse than anvil becase its not only about 2 option whether fail/lose but many stats plus numbers just like gears random line

That’s why I said to decrease the amount of awakening stones they give away.

lol.even with the current you can get its still hard for some people to get what they desired because not only fight over line and value we desired but also there are 9 gears to awaken.also those items acquisition isnt as easy as it seems. you can get 1 each 3-4 days with vaivora coin.with mercenary badge, even if you can trade it for awakening stone you might wanna trade it for bg first, sell it and buy awakening stone. even with like 4 reroll a day it might take weeks,months or years depend on your luck to get what you really want especially for some crazy over achiever.

thankfully they add this awakening transfer feature which give us some ease.i think the current situation of how much we can acquire awakening stone is just fine, and i bet many agree as well.one thing bother me unnecessary bloater that is doubtful given its value and meaning like resistance, sp/hp rec etc.also be clear by telling us the max value we can reach with awakening just like what they did when they release 430 gears.at least they can stat with the later incoming gear.

This is what’s going on:

A.) This is what we used to have for weapon awakenings (I might have missed some, let me know, I’m going off of memory here):

B.) NOW since they combined additional damage, the awakening pool looks like this:

C.) MY suggestion is to make it look like this at the cost of making awakening stones more rare, but making existing ways to obtain awakening stones viable and making the game less RNG based in general:

Crevox is saying the current pool is intentional, I’m saying it’s not, it’s probably an oversight just like the PVP Damage Reduction bug that ONLY RECENTLY got uncovered.

D.) Seriously though, who wants to get additional damage a billion times before getting anything relevant? If diluting the pool is the objective, then this is an option:

You can’t tell me that getting “Additional Damage” more than half the time is intentional.

I’m not sure what bug you’re referencing.

You can’t tell me that getting “Additional Damage” more than half the time is intentional.

Also, the way these pools work is weights on the stats. It’s not that there are a large number of different stats that all have equal chances of landing. Each of them have their own weight that determines how often they appear on items. Additional damage is just more common than all of the other options. You say you want them to make awakening stones rarer, but I would wager a lot of people would not want that to happen, nor is it what you suggested in your opening post. It also doesn’t help with RNG if the items themselves are harder to find, because it makes missing the correct stat you want feel much worse. It also greatly decreases the value of alchemist awakening shops, among other things.

Since we don’t have spoiler tags on this forum, I decided to just block quote them

I’m not sure what bug you’re referencing.

IMC did it intentionally; they had to when they made the change.

I don’t accept this logic, unless they expressly say that they DID review it and this is absolutely intended. Saying that “it must have been intended because they had to see it to change it” assumes people don’t make mistakes.

Example:
“additional damage” on awakenings and red stats isn’t capitalized. Sure they reviewed it plenty of times, they had to because they copy pasted it a lot.

Was it reviewed by the dev team? Yes
Was it intentional? Most likely
Is it correct? Absolutely not

That’s just an oversimplified example. Here’s another one:

Event Elixirs weighing 30 instead of 3

You could argue that that’s intended, because they added the item themselves, of course. They probably had to edit the weight manually, or it would also be 3 weight. Is it correct though?

2nd block discusses why this shouldn’t be the case even if it was intentional.

You say you want them to make awakening stones rarer, but I would wager a lot of people would not want that to happen

Yes, in exchange for better odds, isn’t that fair? Right now it’s 7/14 odds to get something in theory(including additional damage). Won’t doubling their chances be worth halving the number of awakening stones, ensuring they’ll get SOMETHING every time they roll as opposed to getting additional damage half the time?

Example:
I’m a little noob who just started or somewhat of a veteran who wants to enchant something. I take 1 awakening stone from vaivora or feud, because that’s supposedly a viable option, that’s why it’s on those shops!

Scenarios:
1.) I have 1 in 14 chance to get what I want because of the awakening table

2.) I have 1 in 7 chance to get what I want, buying awakening stones with vaivora coin/feud might be worth it

Thoughts:
1.) Dang I should just spend all my points/coins into Blessed Gems or other stuff

I’ll just buy awakening stones from market because that’s my only option.
2.) I might try again tomorrow because the odds are worth the coins

nor is it what you suggested in your opening post.

Don’t give me straw man arguments. Obviously it’s not what I opened the post for, but through the discussion RELATED to the post, we’ve come across this as a consequence of my suggestion.

It also greatly decreases the value of alchemist awakening shops, among other things.

Awakening shops and stones have always had the same value until very recently with that spring event cube that gave a million enchant scrolls and awakenings. Just don’t release events that give a million and a half awakening stones and keep them as they are right now. I think you’re imaging my suggestion as lowering awkening stones’ supply to 10% of what it is now lol.

3rd block is a separate quote from an older post

Changing the good stats (ATK, HP) to be more common but not changing how many awakening stones you receive from content would simply decrease their worth. People get what they need to achieve the stats they desire on their equipment, then don’t need any more.

What makes you think this? I have evasion on each and every piece of my armors now and high patk and high pcatk on my weapons. They’re pretty high numbers. What makes you think people like me and even more casual people will stop awakening stuff just because awakenings are relatively easier to achieve RNG-wise? I’m going to keep awakening the same level weapons/armors and get higher numbers, or get variations(in case I want to use pdef instead of evasion) or just keep awakening to sell.

This is just a good quality of life change if anything. Mostly making awakening less stress-inducing. In theory the ease of getting the right awakenings won’t be that much easier, provided IMC doesn’t release a super awakening stone event again. If you’re an RNG masochist then you’ll prefer how it currently is I guess.