It has been years so far

Bug Description :
Just casually playing on an empty map, killing everything in sight. With this I mean 0 other players.
Anything more populated than this and it just gets worse.
And no, at this point this isn’t just performance issues or bad optimisation.
This is in the state of a full-on bug that needs fixing.

On a serious note: Game is freshly installed, vsync off, no true fullscreen or any mods.
Just a barebones game the way it is downloaded and installed.
Screen is a Benq XL2411Z 144hz display connected over DVI-D.
At the time things that were noteworthy to mention running in the background were MSI Afterburner and Discord.
SOMETHING IS STALLING THE GAME IN FREQUENT PERIODS. Database updates?
Re-Authentication? What needs an update-frequency in the range of 2-5 seconds , and stalls the game.
Whatever it is, that is likely the culprit. 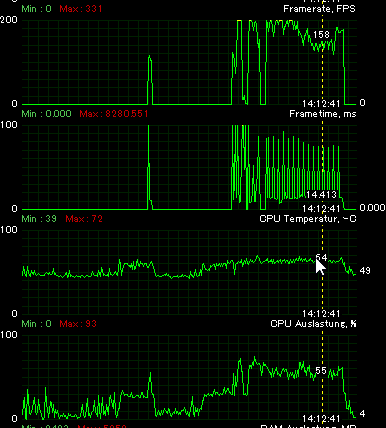 Other than that thanks for a nice game. Too bad that this is too much to outweigh with good content.

Edit: Look at my reply down there for further information about this issue, the inventory stutter bug contributes, framerate does as well.

Another Edit: I’ve wanted to see if Extended UI enables me to pull the inventory off the screen so I could have it stay opened, unfortunately:
1.It doesn’t support it and
2.Whenever an addon is engaged in some way, the opened inventory doesn’t reduce stutter anymore, so whatever only runs with closed inventory starts running all the time.
This could mean another few possibilities, but addons need whatever is creating the stutter. And it is usually not needed once the inventory is open.

UPDATE AS OF 28.01.2019
60 fps finally has a solid frametime-line with tiny tiny dips that happen unregularly occasional loading of another player, which are still huge dips, but only happen once. 72 fps, for those who can’t stand judder with 144hz, is also far better, but starts to have tiny microstutter that is almost invisible to the eye, but can be seen with a graph. The development team seems to have fixed the periodic stutter that was tied to whatever updates happened regarding the inventory, at the cost of support for higher fps than 60.

Let me explain: At 60 fps, you got a frametime of 16.67ms. Apparently gamelogic allows itself to stay under that time amount, so it is smooth. At 72fps you can see how gamelogic very rarely goes above 16.67, however 72fps would be a frametime of around 13.9 ish, so there might be stutter, but it is almost completely unnoticeable. You can see this at 144fps very pronounced:

This is a cutout of a frametime graph for 144fps, or 6.94ms that it SHOULD have. However, in fact, most of the time it is nowhere near close, it stays between 12ms and 16ms. However, since it is very playable at 60fps and bearable at 72fps, it is effectively a non-issue in my eyes. Tree of Savior doesn’t benefit of 144fps as much as other games do.

A big shoutout to the devs, who seemed to have fixed this as a shadowfix (I haven’t seen any patchnotes about this). The game seems to be playable now and everything else would be a bonus, so thank you for making this game playable for people like me, who feel stutter like a hit to the face.

someone said that it’s most likely because of too much re-rendering of the whole screen on functions that it mostly doesn’t need to, or let’s just say spaghetti codes

@diagoacs
This indeed seems to be a big part of the problem: https://i.imgur.com/szNonY5.png
Left part of the graph is with closed inventory, right part is with opened inventory.

While right is definitely not quite at smooth, considering I am at almost 250fps at that point, and frametime spikes too high up for that, it is definitely far less noticeable and I’m pretty sure fairly playable with an fps limiter.

Edit: I’ve noticed that the frametime difference increases drastically with higher framerates.
For example: https://i.imgur.com/JYHqTPj.png
This is 60fps, notice how the spikes decreased drastically.
So whatever is the issue, next to the inventory (it obviously runs on the same timer) is also related to framerate. Meaning: Higher FPS -> higher intensity for stuttering.
The game, in the most literal sense, runs pretty much perfectly outside the city without that stutter.

I’m not an expert, but I think this post they made two months ago might address some of the optimization issues. It’s written in korean, but if you can understand the translation, you may know if what they plan to do will help or not…