Is the new Overlord better than others now?

Overload(Ziburynas) received an update which makes it passively activates when you deal damage and reduced the downtime to 20sec (30sec uptime with 50sec cd).
Honestly, pressing a key to activate Buff is a turn-off for Overload especially for Wiz(not everyone like magic shield) and removing that function is a really great step-up.

So now. will it be better than Dahlia/Gabija? (others are out of question since its kinda specialized for specific set-up)
Overload = +120% damage for 30 sec. 20sec downtime(u probably cast all ur big skills during that downtime)
Dahlia = +400% for channeling only
Gabija = +200% for casting only

I can’t comment on gabija since the only build i know that use it is Omnyo-Terra and I havent use that before. (But im curious and planning to make one hehe)

For Dahlia, Kino-Onmyo-RC no doubt requires Dahlia (5 channeling skills). But how about the other meta class that uses dahlia like Dark Wiz, Fencer, and BB?
Is it worth it to have +400% damage for just 1 or 2 skills that has medium to high cd, than having all your skills +120% damage for 30sec?

Yesterday I tested on Weekly Boss both ichor set (Holy Flame vs Overload) on Terra-Omny-RC and I can say that with the rebuild of Omny and Rune Caster, you can use skills like Yin Yang, Rune of Justice (with art) but they won’t receive any boost from Gabija, same with Stone Shower which is Terra’s main skill. But with Overload you can boost all your skills for a period of time.
The result was… Stone Shower increased a lot and all the casting skills almost mantained their damage, so my total damage increased.
Also there is no rotation problems with Overload, just less spam from Sand Blast but with the increased damage its worth it.

For Dark wiz the Dahlia set is still very much worth it, Kurdaitcha has a very short cooldown (15s, goes to 12s with the set). The footsteps actually last longer than the cooldown if you are using the set, meaning it will be constantly dealing damage. Unless the boss moves away ofc.

Blood Sucking is your 2nd channeling skill, and it also packs quite the punch, lvl16 with attribute 100, art 30 it deals 5630% per hit. Long cooldown though. Unfortunately, it is quite hard to fully fit it into a rotation, so you rarely channel it to the end…

The healing Blood Sucking provides is already gutted anyway, so I REALLY wish imc would give it the same treatment Psychic Pressure got (halved duration but ticks twice as fast).

Awesome, i was gonna test overload over gabija this week. Its nice to see that it might actually be a good idea to switch into overload set now. Have to see the results at the end of the week. Ill come back to this thread and share my progress. Did a testrun on the wbr yesterday and got 12.3b dmg, so first off im gonna try and perfect my run and get the highest possible number i can muster. Then ill switch to overload and do some runs to see the difference.

For Gabija
Yep, only build that uses gabija is Omnyo - Terra - Rune.
But Overload is a nice substitute since it can also boost other skills like Yinyang(Main skill), Stone Shower(Main Skill), Rune Justice art(better since no need to cast), Essence shiki(good damage, instacast) and others.
You still get damage buff on your casting skills since its applied to all damage skills. You can tweak your skill build freely while not depending on which is casting or not.

For Dahlia
Yep, its a must for Kino-Omnyo-Rune
But for other builds, im not sure. Havent tested it. (Im a channeling hater. Fight ME! jk)
But for me (in my theory), Overload can be on par with Dahlia too. Like for example, Dark wiz got 2 channeling spell that can be buffed with dahlia - Kurdaitcha and BloodSucking. But those are not even your main damage skills and has flaws. Both skills can be interrupted, and can break your rotation since you cant do anything while channeling. But with Overload, you can buff all your skills. Your channeling skills still gets buff but not that big.

For Overload
Its the jack of all trades. The budget ichor. The go-to if you can’t decide.

im with you here. Sometimes you are too focused on your damage skills that you didnt notice your buff skills are ready. And with the update, its now passive. And now only has 20sec downtime - But thats the issue.
The 20sec downtime is quite a downer but for long fights, like wbr and raids, i think its still good since you can proc your buff more the longer the fight goes on.

You might want to wait for other’s insight on this, specially on Dahlia part.

Ok did some testing on wbr yesterday with both overload set and Gabija set. On this boss (Tinis) the Gabija was clearly better. Did 4 runs with overload and managed around 10-11b and did 1 run after with gabija and got over 15b. Was out of runs after that and could probably even do better if i managed my potions, rotation and gimmicks better. So for now at least I will stick to Gabija, and once i get karaline/luci accessories I’ll revisit overload.

Wow you actually tested it! Thanks!

After a few reading and analysis, the problem I see with gabija is that it is limited on one build: RC-Onmyo-Terra(you can change terra but it wont be the most optimal dps combo centered in gabija). AND RC-Omnyo-Terra is just a mediocre dps build and can’t even compete versus meta dps builds.
Gabija set is just sad.

Well I’m trying my best to prove that Terra is viable. On last weekly boss raid, i came in 4th. And all the ones above me all have 2 luci brace and 1 kara neck, and the top one has all luci. I got neither. I’m close at getting my first Karaline (neck) just 4 arch frags away =)

Granted this boss was in my favour, but I usually end up among the top 5 whilst battling with the people that have these accessories. When i finally get them i’ll get a clearer picture if my class is viable or not. I’ll keep on trying to improve my gear, my understanding of mechanics and my rotation. But I wouldn’t say that im that far off from battling with my servers titans xD

Make the summoned Evil Spirits follow the summoner in a line. The increase in damage will continue for 6 seconds after channeling ends.

Description says ‘channeling’ even though it’s not a typical channeling skill. have you tested this one?

The cooldown reduction part of the set used to work, but was patched. Now it no longer works for “support” skills

any reason why aim for kara neck first? 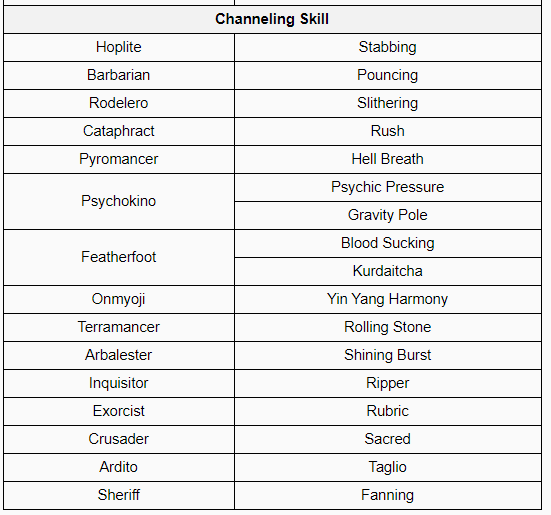 Ghastly Trail is not listed as channeling skill on the Goddess/Demon Armor patch.
The reason is ghastly trail is technically just a buff and not a damaging skill. Same as miko dance.
I think dahlia only boost the damage of the channeling skill itself whilst it should be doing damage while channeling.

why no downfall and DMA ? i think that list is not completed

They might not included downfall since its the art that makes it channel. same as Rune of Justice. But definitely buffed by dahlia.

Yea, that way i can keep the set effect of draconas bracelet and have the same effect 2 kara bracelet would have

How about Marching Fire of SR?

ye that too.
now im not sure if those skills (DMA and Marching Fire) are intended to be not in the list, or the list itself is really incomplete.
Even in actual patch notes, its not listed https://treeofsavior.com/page/news/view.php?n=2093
And that same patch is also where Marching fire is changed to channeling.
Well no one really cares to test since no one uses dahlia on SR or Fletcher anyways