In your opinion what was the best raid when first released

I was between Moring and Skia, but decided for Moring because the different difficulties and mechanics gave it so much depth, it wasn’t only a DPS check, you needed to do the mechanics correctly and have a Party who understood them as well to succeed. The difficulties made that every player regardless of Gear could try it, and the Titles it gave when clearing Normal and Hard made you feel so good <3

Also, the bigger time limit of older raids allowed people who weren’t optimally geared to clear the raid if they played well. The simpler mechanics and lower time limits of the latest raids makes them more of a DPS check and gatekeeps the majority of people without optimal gear, regardless of build.

Glacia was a damage sponge once you stayed away from the pizza and evaded the 2 attacks that could 1 shot you. Big time limit, not so fun mechanics. Was a nice challenge see your growth and being capable to do Easy, then Normal and then Hard tho <3

Giltine on release was hell, was really fun to some but was so hard on the wrong aspects. The recent version is pretty fun tho, nice balance <3

Skia was my first serious raid, and was really fun learning it and clearing it, but for me, Moring gave me the same fun but in more quantity. I can’t talk about Earth Tower and Velco, I arrived to late for that ;_;

Moring normal was the best when it was first released imo, high technical raid with bunch of mechanic and also need decent → good damage. Hard version is just too extreme with high damage (it still hit like a truck with glacia armor let alone varna) and gimmick every 2%.
Skia when first release was with 1m damage cap which not even enough to nuke the mob in phase 1 unless really good gear and build. Nuff said.
Glacia is too tanky but the easy normal hard was done nicely.
As for Vasilissa and Giltine: the most difficult thing is get voucher to do the party raid. Also Giltine at the release is nightmare.

Moringponia Hard was my favorite raid in the game. Once you learned the mechanics it wasn’t a pushover and demanded a quality team of competent skill level. This raid was marred by poor gear progression systems at the time and the insanely rare full accessory drops from the raid.

Your thread doesn’t list it separately and the base raid was fine but had lackluster rewards. Because of the lack of split on them I voted Skiaclipse. At the time it demanded a reasonable level of gear, a good healer, and competent party skill.

Lolopanther was peak performance from my own biased perspective, because i enjoyed all the party organising and strategising we did to complete it. The build discoveries, synergies and the coordination that was performed at least on my server was amazing, and i’ll always remember Lolopanther as the peak of ToS raiding, at least from a player interaction perspective.
The closest i’ve ever gotten to that experience was with Moringponia hard mode, but it was extremely punishing for single errors that i just felt overly scared to run in fear of wasting 20 minutes of my entire parties time every run.

I voted for Earth Tower because at the time of release it was fun and challenging while at the same time simple in conception. Velco also great upon release, but one step behind due to the boring/pointless statue gimmick. Moring, Glacia, Giltine also fine, but less fun. Skia and Vasilisa are my least favorites, simply because of the critical bugs that are/were plagueing them. For Skia: invisible boss (sometimes phase 2 not even starting), cage not appearing (auto fail). For Vasilissa: it’s simply a chore to do for a mouse user due to the bugged target area that covers 90% of the screen and the red circles that prevent mouse movement.

What about Misrus and Tal Harsha? These are considered raids, even if they’re solo ones.

As a mostly solo player myself, I tend to dislike all raids - that is, until we reach a critical mass of power creep where it allows us to clear them with little, if any, communication and cooperation between players.

Voted for ET in the end, because I remember having some fun in there. Though that may just be me looking at it with rose-tinted glasses. I probably hated it at the time too lol.

Honorable mention to solo moring: Gimmicks and bosses were okay, no need to find a party and colaborate with others, and nice rewards to boot.

Velco was nice too, but it got really boring after doing the statue part for the nth time.

Interesting numbers. Personally, Moringponia is the boss I hate most in the game – I can’t stand drawn-out battles, cheap instakill mechanics, the curse/poison/blight ticker-type nuisances we keep seeing, etc. They basically exemplify everything I DON’T want to see in a raid. It’s not fun (again, for me, at least) and feels more like going down a checklist than fighting a boss.

I prefer unique ability mechanics that require split-second reactions (i.e. run out of the way of the rain of fireballs, which descend in confusing patterns). I’m not saying there shouldn’t be other mechanics, though – for example, fighting Vasilisa is actually FUN for me, because the whole mirror thing makes her feel like a Zelda boss. I really want more bosses with cool thematic gimmicks.

If I’m honest, I feel like Moringponia is one of those bosses that’s popular with the hardcore raiders in the game and utterly despised by everyone else. It kind of reminds me of how Wildstar was a raider’s wet dream, but the game crashed and burned because the rest of the playerbase just couldn’t take it.

Raids begun to be very boring after the Skiaclipse update: Enter raid, instant battle against the boss, hurt sponge hp boss until it dies, log off and come back next week. I miss that Fantasy Library raid, the current Legend Raids could be updated to be longer and have more gimmicks like this. Also Earth Tower comeback. 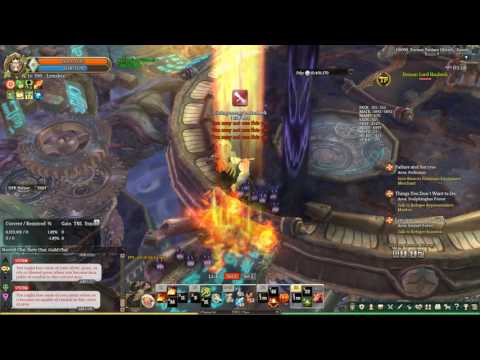 Enter raid, instant battle against the boss, hurt sponge hp boss until it dies, log off and come back next week.

This is why Velco is the only real answer, to me–ET was riddled with problems but Velco felt like more of a real raid. Moring and Giltine at release were too punishing, and Skia/Glacia/Vasi are just HP sponges. When Velco first came out, and primus gear was brand new, the game was extremely interesting, with multiple ways to farm and grind, rather than just mash out the same thing every single day every day. The set bonuses on Velco were also a bit more interesting. But that time broadly was best, you could do a CM (with alts, because resets didn’t exist back then), you could farm Balzer or Fantasy Library, you could do Velco, or you could field farm/HG farm, and everything was lucrative.

I feel moringponia hard is by far my favorite raid ever. Each member has a unique role during the raid, interaction between party members was required in order to clear mechanics. It’s a raid in which success is truly determined by party play unlike any other.

Velco ( until they ■■■■ the birds ai) and Froster Raid best raids

I remember running hundreds of FFL- that raid was 5 minutes of waiting for spawns, cutscenes, barriers, and 12 seconds worth of bosses.

I get why moring and et raid on top vote

Moring was like first raid with some challenging boss mechanics, quite honorable boss AI (in tos scale). From moring, raid boss or generally bosses includes sole hunt, wbr, jsr start having challenging AI (and that’s it the rest of mobs are sponge).though it’s mostly just repetitive mechanic of fatal attack or debuffs stack that will ruin your run where it’s just better to restart. It’s too repetitive.

And why et next is probably because et is copy of ro endless tower, tos first raid that provide journey like, with gimmicky tasks, and required considerable amount of time and effort to completed not only the raid but to complete the gear itself. What makes it interesting is it was so pure for quite a longer time compared to recent raids, pure in terms of unaffected by such thing like vouchers and other premium bs for quite some time rather than recent raid that followed up by vouchers and other premiums soon enough. Also during ET time the gear hierarchy still exist, unlike now where everyone just wear one type of gear: goddess and the rest becomes irrelevant.

Now what makes a legend gear legendary? Or what makes a higher tier than legendary more awesome? It’s because it’s rarity, that not everyone can have it, it’s ultra rare. But now rarity is just a joke. What kind of legendary, goddess gear that everyone wears it.

If everyone in this world rides Veneno roadster lamborghini car does that makes the car special?

I personally like ET
Im not into too much mechanic boss but I like the part of ensuring journey safely that can even ruin your run if the journey fail
ET was more like about process to reach boss floor and the result which is the boss part is actually simple, they just meat
The worst part of it was some part cheesable for too long and its just there ignored
Also to me ET start was during memorable time, at least when the game situation is less hectic, not totally about dmg numbers, and there are more players to socialized and have fun with

Now what makes a legend gear legendary? Or what makes a higher tier than legendary more awesome? It’s because it’s rarity, that not everyone can have it, it’s ultra rare. But now rarity is just a joke. What kind of legendary, goddess gear that everyone wears it.

If everyone in this world rides Veneno roadster lamborghini car does that makes the car special?

If you compared to mmo where gear rarity actually means something, playing tos will surely alienate that concept since in tos gear tier doesnt relate to rarity at all, at the beginning before random stats gear era it probably was, but now its just title to lock on what the gears can do and what it has to offer, like goddess with goddess gear tab etc

Like the lambo analogy, everyone may have veneno roadster exterior but they may have different interior, like enhancement, ichor, set stat and so on.

So yeah, tbh the concept of gear “rarity” probably no longer exist in tos. Its just gear tier. I couldve get a piece of vasilisa which is a goddess gear faster than getting a purple fortress shield drop from field mob.

There are actually too much to list of game stuffs that already obsolete and ignored for too long but they tackle it super slowly. Like potential for example, it took them a new gear tier to implicitly remove potential from gear, and unfortunately also remove the economy aspect of gear like adding enhancement, enchant, random stats etc and sell it to market cause back then its money maker, its some active economy. Its kinda sad to see market now, its like market of a d**d game.

ET.
both the mechanic and the rewards.
if you ever feel the excitement of obtaining your first solmiki piece then get all 4 pieces and feel the struggle to TC 10, you were playing tos at it best (personal opinion).

ET
ET was during good time, when the game still feels more alive and pure
when the chat is active with party making, economy still runs, less rng invloved and everything simpler
( keeps aside the bugs, unbalance, and every wacky stuffs which even now still exist)