In General
At this point everyone knows how much of a difficult balancing act this will be. There are several very serious mechanics of the game which contradict each other, and they are actually not simply related to territory wars, but core game mechanics. They are:
1.) Core functionality of guilds, sizes, and leveling
2.) Core functionality of gear and PVP-specific rules surrounding gear/damage

Guilds
The core issue with territory wars is the nature of guild structure in Tree of Savior. Leveling guilds is very, very time-consuming, very costly, with rewards that don’t quite scale well until very late down the line. This means that most of the guilds, particularly on Klaipeda, are very, very small. The current territory war structure incentivizes large guilds, but there is no content outside of this new territory war which accommodates for guilds that large, as guild bosses and raids scale some but not much, and the bigger your guild is, the harder it is to get everyone to do things together. Even card albums have a bit of a 25-person soft cap, but the overall player limit in a guild is just around 100.

The issue here of course is that you don’t want to punish guilds bringing multiple players into GVG, but you also need to think about the average guild size. Guilds which are only 5 people strong really shouldn’t be rewarded either—but that’s the problem with the guild structure as it stands right now. Guilds are small and insular and there was far too much work that went into them to just cough them up to play GVG. Something’s got to give. Alliances might help but there’s also plenty of room for pure terrorism: What happens if very large guilds ally and prevent anyone else from even playing?

The “top” guilds—I use that terminology because this test’s survey question does—have about 20-25 people. This seems to be a reasonable amount, and the two new maps and Genar accommodate for defending a point well with that size of guild. However, there are two guilds total who have those numbers, and it seems now only one with some level of consistency. I understand that most guilds just won’t attempt the test because it’s every night in a week (see first point), and competitively minded people won’t participate if they don’t think they even have a shot at winning, even if the purpose is to test the maps and structure.

And I’m sure most smaller guilds look at mine as though we’re in that sort of “top” league, simply because we generally have 10-15 but are PVP-minded and have 3-5 people geared/built strongly for PVP who respond appropriately to a given situation most of the time. This puts me in an awkward position and a bizarre, self-defeating Catch 22. While it’s hilarious to see all of a smaller guild get wiped to a single shadow conjuration, it doesn’t feel good when we’re the ones getting wiped because someone has 10+ more people than we do, where a fifth of that guild are classes which bring unnerfed immunity skills to the table because TBL rules are off.

Which brings me to…

Gear/PVP Specific Rules
This is the other really difficult balancing act, because players should feel like they’re rewarded for putting in the time and effort to obtain gear. However, not having normalized gear in territory wars leads to ridiculously high damage that is unlikely to change after the armor/weapon/transcendence rework. Not having reduced durations on key immunity/buff skills leads to feeling like some classes are just absolutely mandatory per party, and makes those core classes that much more powerful. It becomes a chore.

The Leticia’s cube elixirs should also be disabled or reduced in efficiency. They are just too strong and it gives a clear disadvantage to anyone not using them.

One suggestion for normalization would be to add PVP-specific potions, and PVP-specific gear. Perhaps all existing gear could be normalized in PVP, but additional gear could be gotten through territory wars as a reward over time (even if you lose, though more slowly obviously), tradable, and this could be the only non-normalized gear for PVP environments. This would allow for much more control on the developer’s part for PVP balance, and would be easier overall than trying to balance all existing gear and classes and consumable items.

New Maps
I like both maps a lot. The points themselves are large enough that you can still choose a point from which to attack a defending guild, and both new maps have three (albeit narrow) points of entry.

The one problem I see right now however is that points go up very quickly for the attacking guild, even without the golem. This leads to a lot more back and forth than before, and encourages simply zerging from spawn rather than any kind of meaningful strategy.

The new temporary immunity mechanic rather than safe zone worked out great, I just do feel like it should be a little longer than five seconds. Maybe ten?

Rewards
The rewards for participation and victory should probably be better, even for the test period, to encourage that guilds actually join. Some kind of item which is normally awarded via TP (rather than just handing out TP, that’s a bad idea, remember?), or some kind of item which lasts longer than a really color-clashy armband would be great. Also, please consider making the existing rewards team storageable. People obviously want the leveling items on the characters they are leveling, not the ones they’re using for GVG.

Stability
The client has been a lot more stable, but the desync has manifested itself in new ways. Targeted abilities seem to go off and whiff because the person is nowhere near where the client is telling you they are, it’s also leading to weird skill animation freezes. The first night (Wednesday) was actually better than the second, Baron Allerno actually crashed twice on Thursday: once right at the beginning and once about 40 minutes in.

Format
It will be really hard to come up with a format that pleases everyone, I do think that kills should weigh in somehow though which incentivizes bringing more damage-oriented classes rather than nothing but clerics. I don’t think straight deathmatch is a good idea either, there has to be some kind of balance. Perhaps a buff for more kills done over time. There may also be some way to balance the numbers differences between guilds, but that would just be far too hard because guilds are so much larger than the amount that will log on for GVG, no matter what happens, and you don’t want that to be abused either.

Overall, I think it’s getting there. The changes already made show that you’re listening, and I hope you continue to do so and that this continues to grow into something great.

@Staff I was asked to post some information by GM Peach regarding the UI.

We only have one or two people in our guild (which usually has between 10 and 15 for GVG) that can see the UI at all. Here’s what that’s apparently supposed to look like:

For most of us, we don’t get anything. Here’s also a screenshot of all the damn buffs we got while the maps were bugged: 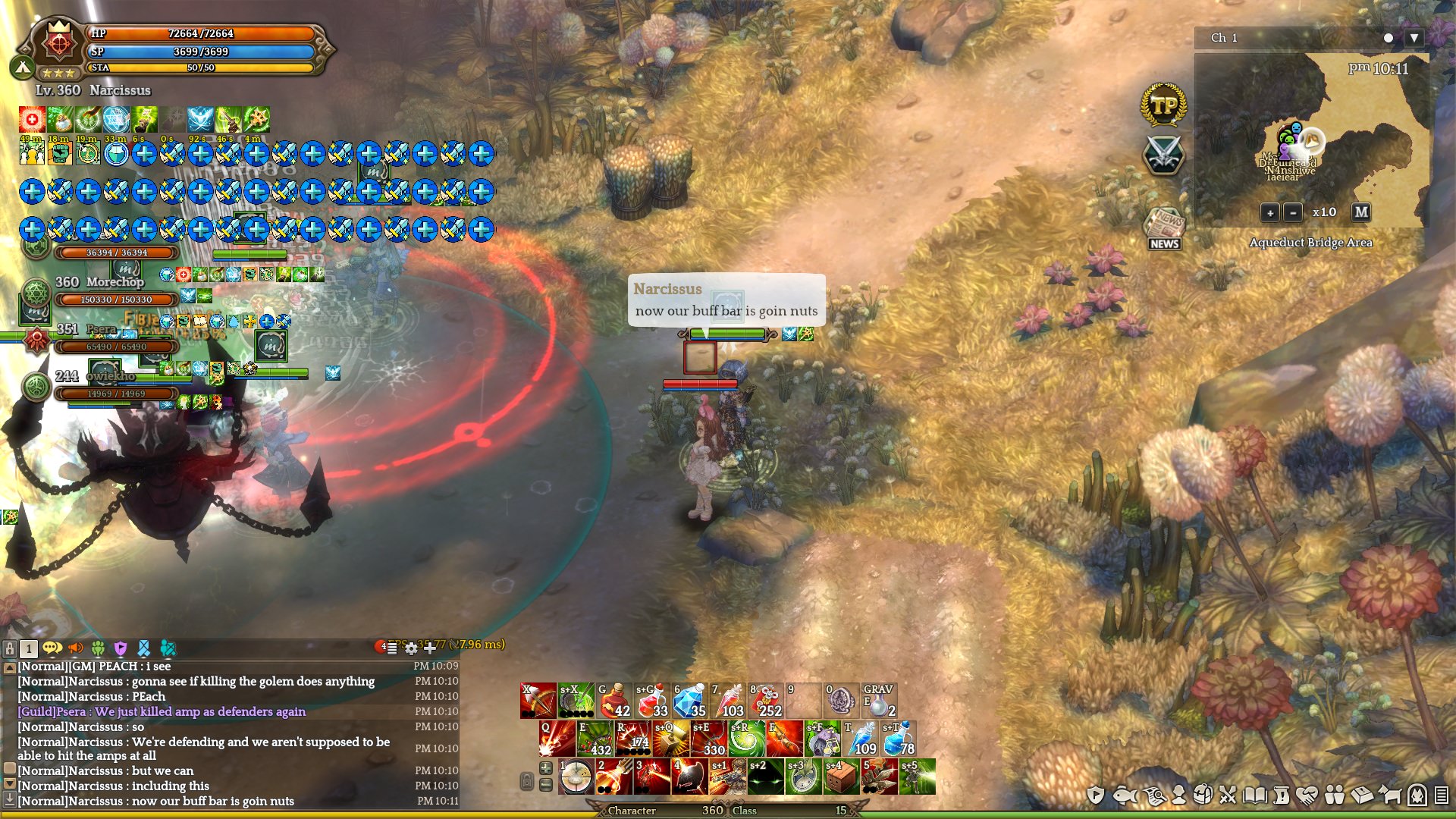 Overall, I think it’s getting there. The changes already made show that you’re listening, and I hope you continue to do so and that this continues to grow into something great.