Before starting I would like to say that there is a smaller participation in this beta than during the first one, this may be for many reasons but I feel that it is because most Klaipeda players interested in GTW already had enough test during the first one, the Rewards are not very attractive and most of them have already written their feedback so they may not want to give a new one since this GTW feels the same since the changes were not that big.

Below I will give a feedback of the GTW that we have been playing during this week. I apologize in advance for possible grammatical errors since English is not my native language. Without further ado, I will begin with the point that, in my opinion, is the most important and that needs urgent attention.

I know it is something that many players have commented on but it is something that should not be missed and needs immediate attention. IMC has done a good job optimizing the game in recent months but I feel that is not enough and there is still much to do. During GTW beta there is a lot FPS drops when many people appear on the screen which leads to the screen to freezing on many occasions also desync and VGA error which complicates the situation and becomes stressful and even demotivating .

Because of optimization the gameplay in general tends to become a little erratic, you cannot establish or execute a strategy since the lag mostly does not allow it, so GTW ends up being a mass scale PvP where mostly the numbers win. It is not possible to think about executing a strategy to defeat a guild because when the fight starts many players can’t even move or the game reacts slowly due to FPS issues.
The limited structure of 5 players party also limits the gameplay since there are many buffs that are only shared per party which limits the structure of the party and therefore the gameplay. The structure of the partys not only limits the gameplay in GTW but also as a guild in general since it is IMPOSSIBLE to think about including many people in different events, boss hunting, etc. In my humble opinion it is absurd to keep such a small partys while the guilds have room for 80 people. This only hinders the guild concept of “playing in a group” which becomes impossible and tends to exclude members to make diverse content.

The change to the safe zone seems very accurate.In the same way the Amplifiers and tree root crystals seem good in their execution. As for the Boss monsters it seems that too much time is invested in killing it.

The selection of maps seems much better than during the first beta and I like them.

This topic has already been addressed in other feedbacks so it is nothing new that no form of balance exists between Tree of Savior classes but I can propose a possible solution. Separate the skills for PvE and PvP/GVG in the following ways:

This would be included in the skill tooltip so new players would have access to this information and know the PvE and PvP/GvG differences. Trying to balance a class for both PvE and PvP is very difficult if not impossible.

Many bugs have been reported but it seems IMC has not solved them, I know that this topic is very repetitive but I still mention it since it is not possible to improve in a game with so many bugs. As part of the section I will mention some bugs (They do not always appear but when they appear they are VERY annoying):

I would like to propose some important ideas that would greatly improve the gaming experience:

I know there is a lot to improve but I consider ToS is a great game with a lot of potential so I’m hoping for it to improve!!

Very much agreed and something I forgot to mention. The old structure of GVG where everyone was in one party was exceptional for this, and made it much easier on guild leaders overall.

As for the Boss monsters it seems that too much time is invested in killing it.

This is also something I forgot to mention–the boss can afford to have almost have as much HP as it does now to feel like it would be worth doing in most cases.

So today we have a weird bug, the party UI show some of our members as lv 1 offline (even tho they are online) and the GTW UI is still bugging (enemy guilds are generating point but we can’t see them). Also the pvp function is not working. And our buff bar is also bugged. 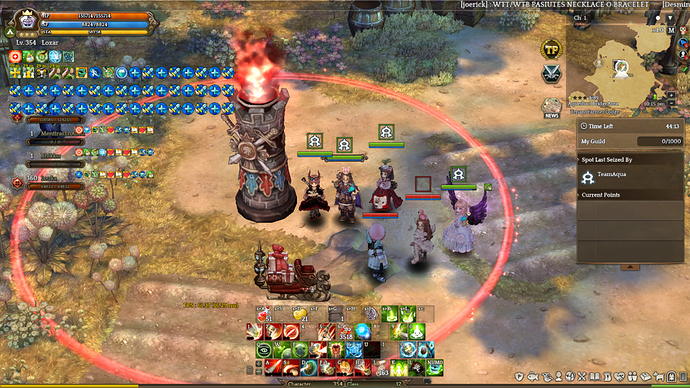