Hey everyone! Just wanted to share my Wizard Build before any major changes come again XD.
I called it Final Fantasy coz of the Fire, Ice, Lightning XD

So basically the build is Pyro>Cryo>Tao. And I just love the synergy of the three. You can check it out in action here:

Skills can be found here:
https://tos.guru/itos/simulator?tinyurl=y67lyc3j

So why did I pick this build? Mostly because I love elemental magic. Also because of the Skill combos I could do with it. Here are the combos that I usually use:

Tri disaster charm + Any damage spell (for obvious reasons, all fire, ice and lightning spells are boosted by this).
Raise+ Ice Pike+ Flame Ground+ Prominence ( I use this when dealing with mixed ground and flying mobs. the combo makes the ground targeted spells hit air)
Lightning Charm+ Storm Calling+ Frost Pillar + Eradication (Deadly freeze+ lightning bonus AoE damage)
Creeping Death Charm+ Snow Rolling (his one is hilarious but super effective when dealing with elite mobs. Basically you Roll over mobs and keep rolling over your death charms)
Fireball+ Snow Rolling (For when you want to run over your enemies with an exploding, flaming snowball)
Ice Wall+Teleport+ Hell Breath (This only works coz I have a Mineloader card which triggers lightning shock on Ice pillars which then makes them shoot ice shards).
Fire Pillar+ Lethargy ( I only use this whenever I need to reset my Lethargy buff. Fire Pillar alone already deals a lot of damage)

looks fun , too bad we dont have a lightning mage

I actually wish they would change taoist skill animation from throwing amulets to summoning actual lightning XD. The skill effects and stats themselves are already good

that would be cool, the lack of lightning spells , or spells that are lightning but “meh” to use.

I think, you can replace Cryomancer with Elementalist, it has more synergy and useful skills (damage, combo and buff), the problem is, what skills to maximize in Elementalist with that black mage build (from Ivalice). In the end, with Elementalist, plus electrical and fire in exchange of ice (have one good ice magic, but… only one).

It is always easier to create an elementary themed magician with maxed damage skills, but it is very common except strange attempts with the dark o earth element (and sacred, but this is almost impossible to be practical with Wizard Tree, I think there is only one skill or two of that element).

Ok, we have the black magician (from Ivalice), now we need the Gnosis user (air, earth and water; the Bangaa magician from Ivalice).

… The problem of Tree of Savior (in this case) has always been the lack of a solid system of specialized classes to make unique characters, instead of three Ranks, a single class to select (and easier to balance) , with one of magic, one of combat-body and another of projectiles … it would be enough) … but with lots of skills and specialized branches unlocked according to assigned levels of expertise skills -you have ice magic mastery to lv1?, ok, you can learn some basic magic of ice, but you have lv10 of fire (the max), so can learn all fire magic until you run out of skill points, yes, limit skill points- (in the case of magician, they would be organized by element, including time-space as one or one of support, another of healing; in the case of the melee warrior/rogue, it would be the kind of weapons, in projectiles, the same). Of course, they return the free allocation of standard uniform parameters and attributes for all abilities, along with some that modify the ability to be used differently (for example, instead of damaging, offer some improvement, protect, heal or invoke).

The other problem, the SP consumption… in these days, play a wizard is painfull… it looks more like a drunk person drinking alcoholic potions.

Ah, jobs should go apart from class like other games. But this is Tree of Savior, from bad to worse in every update, like the Titanic with Mr. Iceberg. From here, im waiting and watching, not playing, for see what they think to do and how they want destroy they world…

I did try this build, but I had some issues with Ele:

I really wish there was an earth element counterpart for cryomancer. A class that does support CC but mainly petrification instead of freezing. That way I might do a pyro> earth class> omnyoji instead, to make a fire+ earth themed character.

Also, picking ele over cryo makes me lose CC and defensive options which makes my character soooo vulnerable against attacks.
The reason I picked these three is also due to tall of them not having cast times.

because taoist is black sheep.like bokor and linker thauma enchanter in scout tree.
they stole taoist from cleric tree which supposed to be taoist priest, not taoist wizard and happened to be lightning user like many other mmo involving cleric and mace that also resembling thor.

i still hope they bring back taoist and bokor to cleric cause the lore is suitable with cleric tree not wizard.they should also get synergy pretty well. and also changes the skill from lightning to holy.
and give wiz a lightning and earth focus class.

make a lightningmancer, give it zaibas, divine punishment and lightning hands hahaha 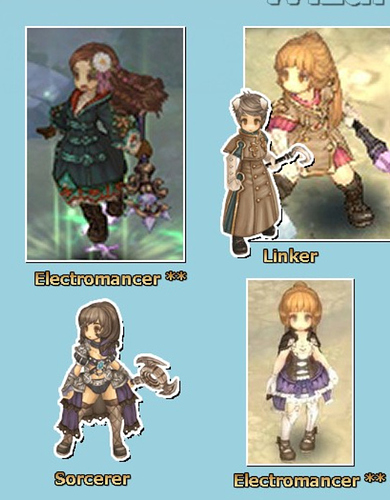 honestly i still like lightning to be another focus of cleric so instead of lightning taoist priest make a lightning class cleric that resemble thor. beside wiz almost have all element except holy and also fire and ice focus.maybe lightning and earth can be focus for cleric

Hail is for bosses. Or if you use it for mobs, you need to run around in circles.

Sorry, but that’s not the case, especially if you level up the skill and enhancing attribute. And remember with tao you have Storm Calling that doubles the number of targets. For example, using this skill vs Boruta at level 15 hits 20 times for roughly 25k damage per tick, which is 500k damage every 10 seconds!

Elemental essence is a pain to keep up

Agreed. This should be the first thing devs address for the class. At least make the buff last 5 minutes. For Elementalist, those invested 10 points are 10 points not put into the damage skills, they should be worth it.

When Fire Claw was not that good, I was using points for Stone Curse, but found out it’s not good at all. Better pump the claw, damage is great vs bosses (+ low cooldown).

It’s Upper Level, but yeah you combine it with flame ground + meteor, still one of the most devastating combo in the game.

In the next patch, the Lightning Charm will work for all your skills, this is much better than the old vs frozen bonus

did CM5 Outer wall district 15, no potions used.
Was gonna try out CM6, but my mom was rushing me to buy rice for dinner XD