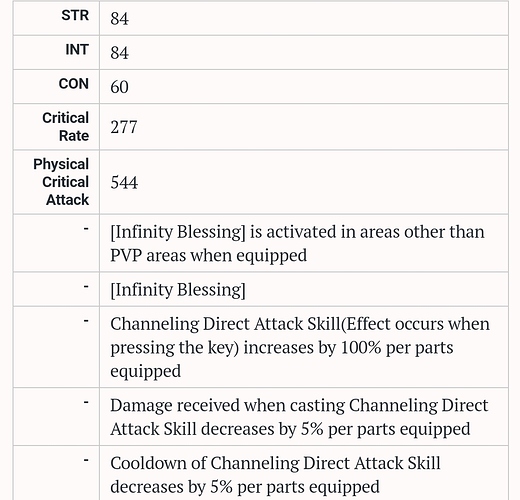 so do you mean it is option C?

Not sure what you wrote but b and c are the same, aint them?

Im pretty sure its an additive damage modifer like 95% of buffs in this game (frenzy, fanaticism, brutality etc.) but not part of the +400% damage buff cap. (I think)

Aka it modifies damage at the end, but additively with other similar modifiers. (Not final damage)

I must admit i have no idea how hasisas works, People have claimed it modifies the patk modifier from critting, that its an additive modifier and its final modifier.
Most crit damage modifiers are multiplicative like StartUp, Epee stance, Blind faith attribute, Sterea troph etc. But some exceptions apparently exist like Zalciai? (Havent confirmed)
Weird stuff really. So many different kinds of modifiers.

ludo said that +400% is same tier with steady aim but not capped by +%dmg buff cap. I have no dalia to test unfortunately

Can anyone explain me why Taoist is inside the meta for channeling builds? (Tao, Onmyoji,Kino). Why not Pyro-Onmyoji-Kino or FF-Onmyoji-Kino?

Lightning charm is overpowered. Simple as.

Can anyone explain me why Taoist is inside the meta for channeling builds? (Tao, Onmyoji,Kino). Why not Pyro-Onmyoji-Kino or FF-Onmyoji-Kino?

Kino’s gravity pole is too strong as a channel skill, and onmy doubles the damage potential of GP while also adding a new channeling skill to the build, so both are must-have when building around dalia set. Then, we have 1 slot left:
-Pyro: Hell Breath deals 1658% per hit, 32 hits, 45s CD, 1179.02% DPS, which is ~36.44% damage improvement compared to kino + onmy only (kino 2373.33 + onmy 862.22 = 3235.55, if we add pyro, it becomes [(3235.55 + 1179.02)/3235.55])
-Taoist: tri disaster charm increases fire dmg by 80% (additive, but better than nothing), remember that half of the hits from gravity pole (fox-hits) are fire property. Additionally, lightning charm grants 40% chance of dealing damage equal to 80% of the original hit, in average increasing final damage by 32% (very close to the 36.44% dmg increase from pyro, and it matches this ratio if you take tri disaster into consideration). So taoist is a much easier way of improving damage for the channeling build, as it does increase about the same damage as pyro but without locking you channeling another skill in the build
-Shadowmancer: it was a viable last pick for the build before the addition of the psychokino’s vaivora in KR, as shadowmancer provides strong defensive skills (infernal shadow’s shield, hallucination and shadow pool) to protect you while channeling, while also providing enormous damage for a single class with infernal shadow + shadow thorn (with shadowmancer’s vaivora, since at that time psychokino had no vaivora), and half of the damage of yin yang is dark, so it could be duplicated in the shadow. With the addition of psychokino’s vaivora, this class as the last option has become obsolete, but it is still viable and fun to play

ludo said that +400% is same tier with steady aim but not capped by +%dmg buff cap. I have no dalia to test unfortunately

This is correct. Same goes with Demonic ichors.