Not sure if this belongs in general discussion , pls tell me if I gotta move this elsewhere 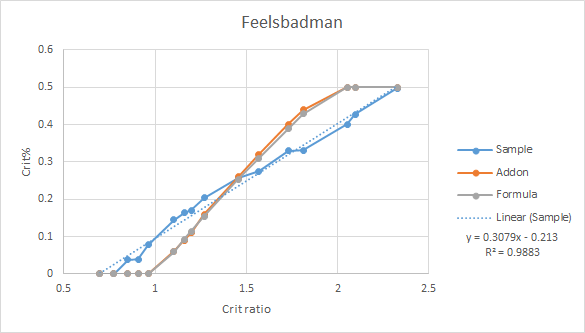 Conclusion: Formula and addon are definitely wrong (see graph above)

During Re:Build season, this was posted in news:

It included this graph: 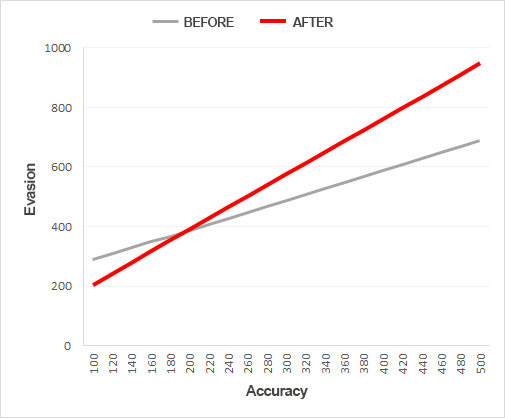 The graph description was “Evasion values required to maintain the same evasion rate in relation to the opponent’s accuracy, before and after the update.”
Graph was also stated to be similar to crit%, but with different factors and values.

I’m guessing the graph was produced by setting a value, e.g. 20%, and then seeing the accuracy/evasion required to hit that value. I THINK the graph supports a linear relationship between crit% and crit ratio (proof in section 8, with other technical-ish stuff).

This plus the linear graph fitting pretty well in excel kinda just made me move towards a linear formula.

Other fits in excel did not work as well, but of course it’s possible actual formula is a fit not present in excel (e.g. powers, combination of exponential and linear).

I’m leaning towards 2, because 540 hits is a pretty good sample even at the predicted 3%-ish crit rates I tested imo.

It’s difficult to determine the exact coefficient and formula because of the lower cap at 0%, and upper cap at 50%, and it’s hard to pinpoint where exactly those caps happen.

E.g. A crit ratio that gives a 70% crit% will still show up as 50% when testing, meaning you have to guess if crit% is exactly 50%, or is actually something higher but is capped.

Formula of 0.3(crit rate/crit res of mob) - 0.2 (capped at 0.5) may be the actual formula used to determine crit%, and not the addon formula/common forum formula.

Even if it’s not the actual formula, it’s a decent estimate especially at any crit ratio above 1.

Flaw: This suggests a y-intercept of 0, which does not appear to be the case in the rebuild graph

Statistics and stuff
I’m pretty bad at statistics, so please correct me if I did anything wrong lel.

Population distribution is binomial, but sample population is estimated to be a normal distribution by central limit theory (CLT). To my knowledge, any sample size above 30 can be CLT-ed to some degree, but ensured that min(np, n(1-p))> 5, as per this random article anyways:
http://sphweb.bumc.bu.edu/otlt/MPH-Modules/BS/BS704_Probability/BS704_Probability12.html

Testing of formula was 2-tailed, done at 0.05 significance.
Null hypothesis is either the addon, common forum formula, or the linear formula.

Addon and common forum formula both rejected consistently except around 1.4-ish crit ratio (the intersection on the graphs).

Linear formula starts getting some rejections at crit ratios < 1.0.