Date and Time(Please, specify the timezone) :

Screenshots / Video :
(attach screenshots or videos regarding the bug) 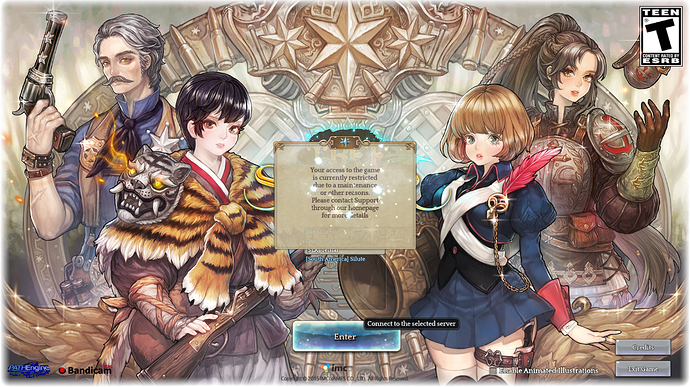 from what I see, you probably get banned because of this https://treeofsavior.com/page/news/view.php?n=1883

now we know which teamname got ban…
rip

it was a bug from dungeon and saalus quest. They just lock us down to slove the problem (hope so)
this was a bug and many ppl exploited it (me too) so many ppl got locked down for investigate. Just wait for more info

If you feel that you have wrongly banned you can send them tickets to explain your situation on the support page.

I have the same issue too and I have no idea those coin would come in like second or 3rd time when I repeat daily dungeon mission and that is so annoying, we got banned for the server randomly give us some more coin… hello? I mean I dont even know there exploit like this I just play the game ok? I really dont like the approach that the server made for some player like me that randomly get those coin without even knowing the exploit and now… the best part got banned for your server giving extra coin in daily dungeon mission… this is like you give me your purse and telling people that Im stealing from you and call police caught me… wtf GM? Help me pls!

they lock our id to roll coin back, bro

honestly why you guys even abuse…
those x5 coin buff is a bless already
i can do 1 solo cm and get like ±400 coins
the non content can give you from 950-1100
the monster drop x10 coins with x5 buff and the drop rate is better than those christmas keys
you guys are just lazy and took a shortcut
thats why punishment is inevitable
but for those who felt unwillingly getting those extra coins and banned, too bad, a little symphaty from me, but you should ve realize its a bug because the event page said itself 500 coins for login per day.Knowing this you shouldve make quick video and report the bug as well to wash your hands from ban appeal that may come to those who intentionally abuse the bug and point that you are just unwillingly grab those bugged prize and prove yourself that you stopped and not attempted to abuse it to support your ticket in case you are banned.
better be prepared next time.

Knowing this you shouldve make quick video and report the bug as well to wash your hands from ban appeal that may come to those who intentionally abuse the bug and point that you are just unwillingly grab those bugged prize and prove yourself that you stopped and not attempted to abuse it to support your ticket in case you are banned.

You are being too serious in game.
Not that everyone will put their seriousness in game, it is not what they want from games.

But if they are too carefree and put some trouble to the other player, they are guilty.
If it is not much and they do really repent on it, It is fine.

But in this case, most of fault laid in GM and Dev. Some of the fault are in those depraved cheater.

Some of us just want to play it normally, and be serious in team play. Not to be a police or overseer in game. Everyone’s seriousness is different.

I hope ad will give me some explanation for this . It really feel unsafe when you playing game that can get ban for no reason.

i thinke ees doing automatch in dungeons and salus owO;;