I’m trying to trigger this quest at Lemprasa Pond through Highlander SubMaster NPC. The last time I did it, it works. My level 400s char triggered it and still has the Warp Quest on the list.

Last week I’m trying to trigger it again using another 400s chars that never done Orsha’s quest line before and both of them did not get the quest. Both the chars has not yet progressed Episodes that far (probably only done 1-2 Episodes). Both chars got the item to unlock the quest (Sword Pell Fragment). Already trying to talk to the NPC but no wanted response. 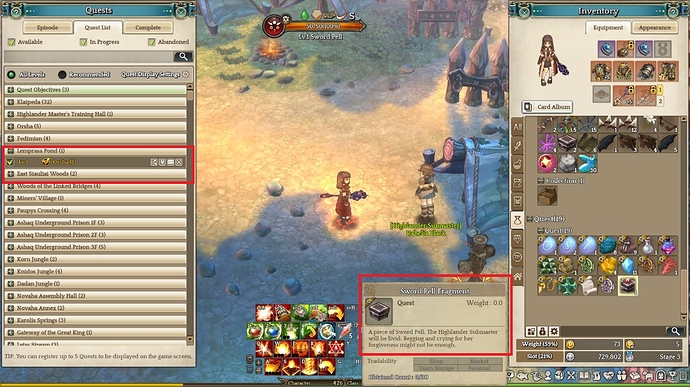 My lv 400s friend’s char who already reach Episode 12/13, able to get the item (Sword Pell Fragment) but also did not get the quest.

I have not yet try another hidden quest so I don’t know if only this quest or not.

Isn’t that the quest where you have to use the “sorry” emoticon in front of the NPC to trigger it?

Turns out the problem is my memories because I TOTALLY FORGOT ABOUT THAT GESTURE.