Thank you for reporting this matter with video evidence. We will investigate the reported players. 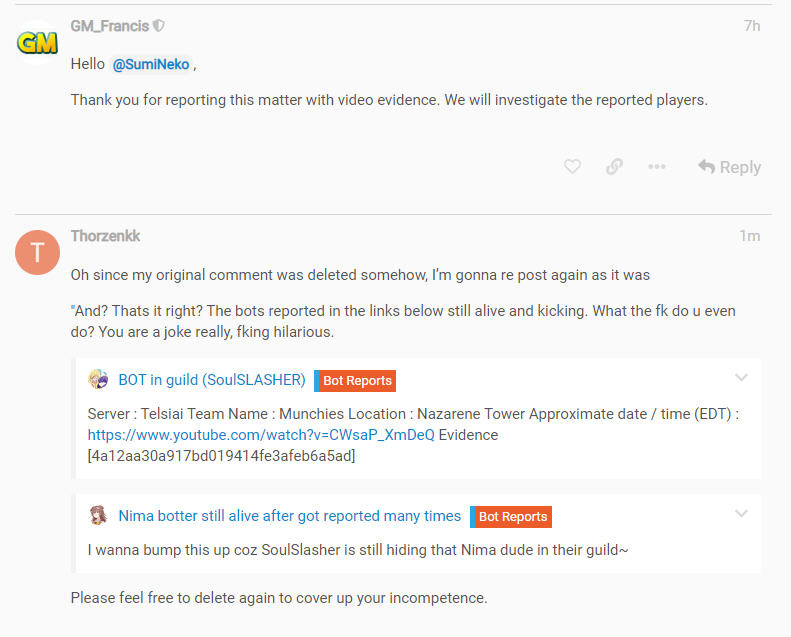 I doubt it would make much of a difference but I’d figure I would clarify a misunderstanding before it gets out of hand. We gave a recruiting role to someone in the Season server for Botus guild and they were recruiting anyone to make the guild look alive. That person apologized for recruiting those GGSlayers and is currently no longer in the guild. Neither are those GGSlayers as well. We had no idea what was going on as we haven’t been playing on the Season server as much.

Can you explain why the alt guild for Lotus from klai is called Botus? I have heard rumours that Lotus is used by players from FMC and etc to do their botting. The chosen name for the guild in season NA server certainly gives it credibility.

Botus is just a joke name based on the

emote replacing the first letter, why would anyone openly admit to botting through their guild name anyways.

I’m not sure where you heard the rumors from but that’s not true. Lotus is it’s own guild that’s slowly rebuilding after most of the older players had quit the game. Few of the older members went to FMC but due to lack of guild space, some of us decided to stay in Lotus instead. If you do notice any suspicious behaviors from one of our members, please notify us so we can take action accordingly.

As Fenatte explained, it’s just a joke based on the B emote replacing the first letter a few years back. It’s an old inside joke.